The Welsh Ride Thing last year was my first foray into multi day bikepacking, and it was such an amazing weekend. Well how things change in a year, now I’m on the countdown to riding the Tour Divide and this years event was a good excuse for Tom and I to test our bikes with all the kit we are taking to America in June. 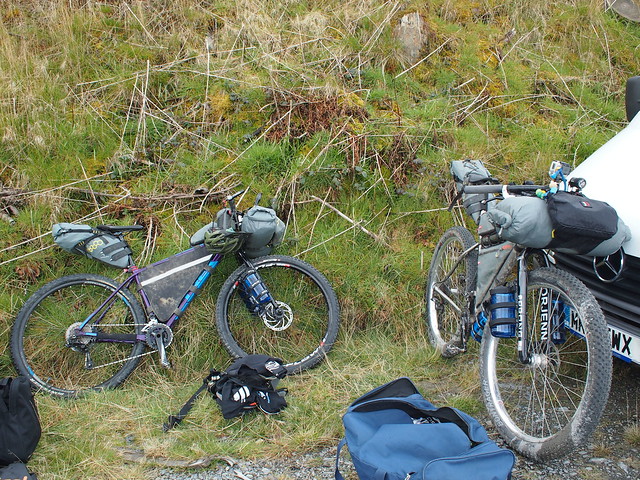 We had the added bonus of having “converted” some of our usual crew to this slightly unusual offshoot of mountainbiking over the last year too, so it was awesome to turn up in Wales with a big crew of my usual riding buddies. It was set to be a great weekend, even if the previous great weather had blown itself away to leave us with a terrible forecast. However, as we’d discovered last year, it’s rarely as bad as you think it’s going to be and somehow when you have resigned yourself to riding for three days bad weather doesn’t seem quite so hideous for some reason. 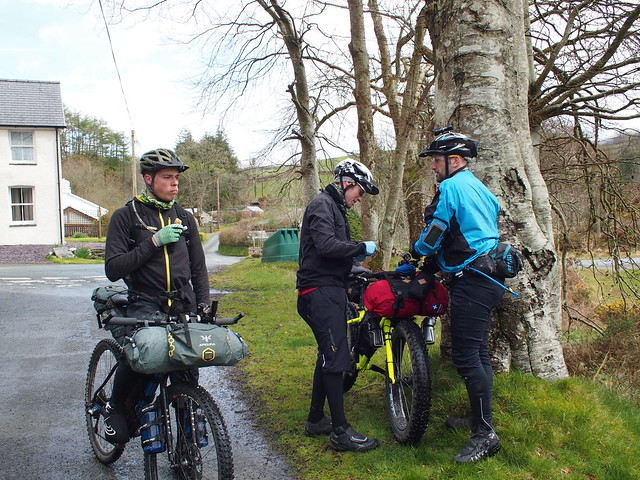 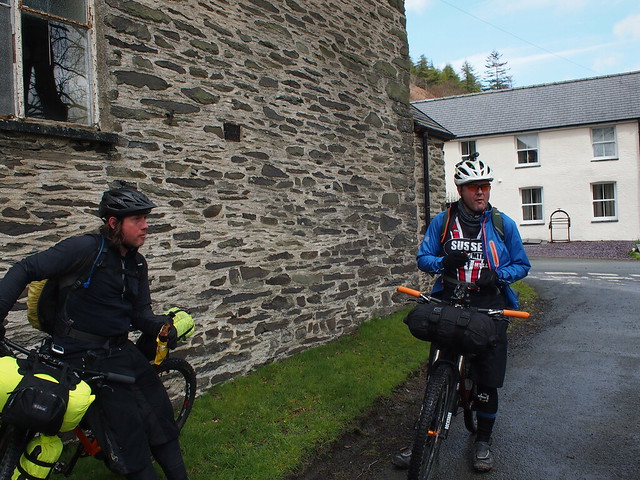 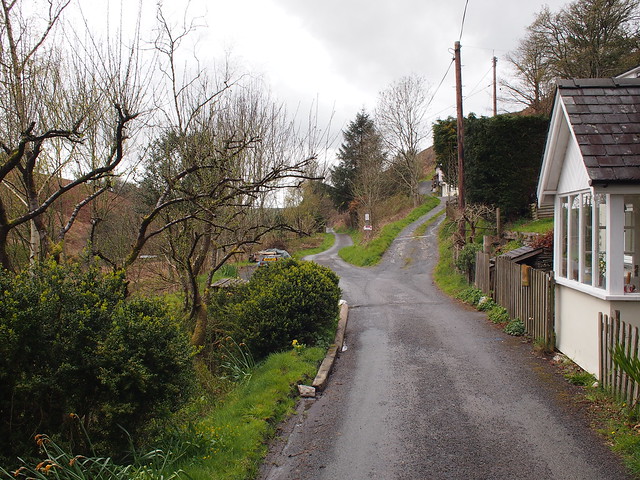 So we’d planned a pretty good route that was around 110 miles, however there were some bad weather shortcuts and with what was forecast it looked like they would be the safest and more sensible options. It was a mixture of country lanes and off road bridleways and singletrack. As we discovered last year though, when in Wales the route marked on the map doesn’t always equate to what is on the ground. In one or two places a certain amount of “improvisation” was required, and maybe a bit of fence vaulting too! 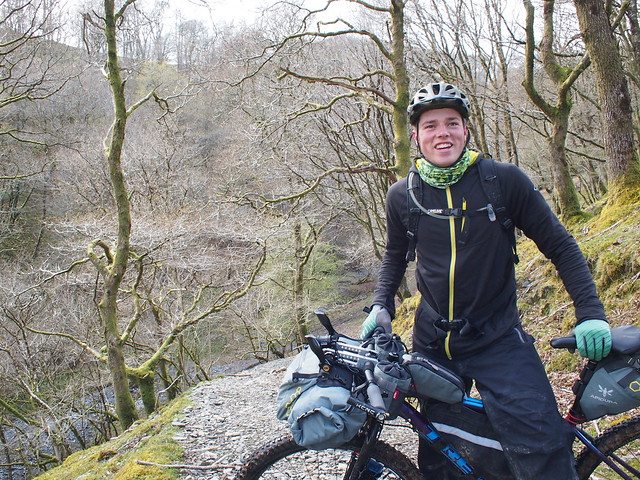 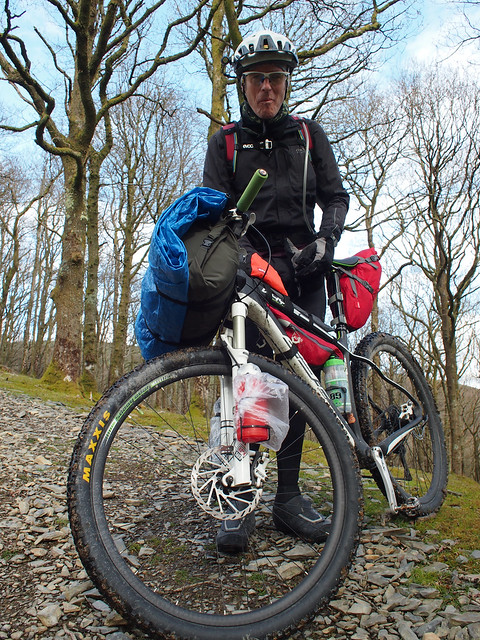 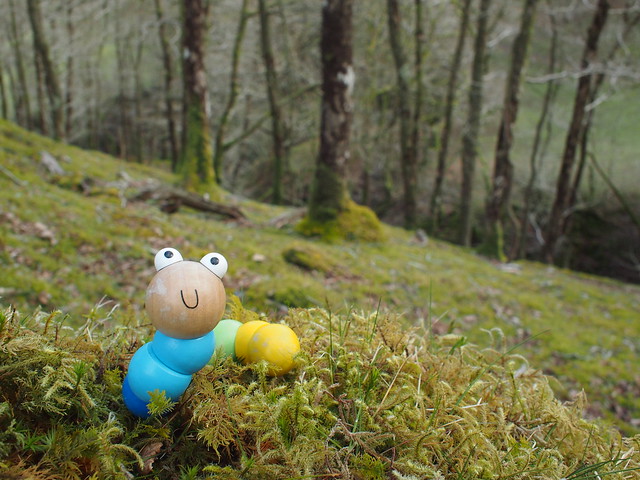 On the first day our route also took us through the excellent Climachx trails in the Dyfi valley. This was the same weekend as the Dyfi Enduro, fortunately we were there the day before as my Garmin had us riding some sweet singletrack that also happened to be marked as the enduro route, the only problem was we were going the opposite way! 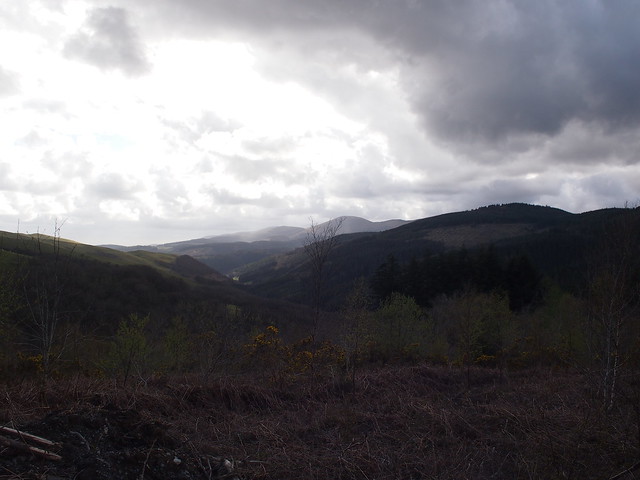 We lost the trail a couple of times, but eventually ended up in Dolgellau, hungry and thirsty at dusk. A quick top up of water and some munchies and we were heading off into the darkening skies looking for a bothy Richard had told us about near Coed y Brenin. That would mean we kept all our kit dry for at least one night and also didn’t have far to ride for a slap up cooked breakfast in the morning 😉

Fortunately the MBA web site gives grid references for bothies, however that doesn’t make it any easier finding them in a forest in the dark! Eventually though we rolled into our luxurious accommodation at about 22:00. Dinner was quickly cooked and consumed before we all settled down to a relaxing night lying wide awake listening to Duncan snoring. 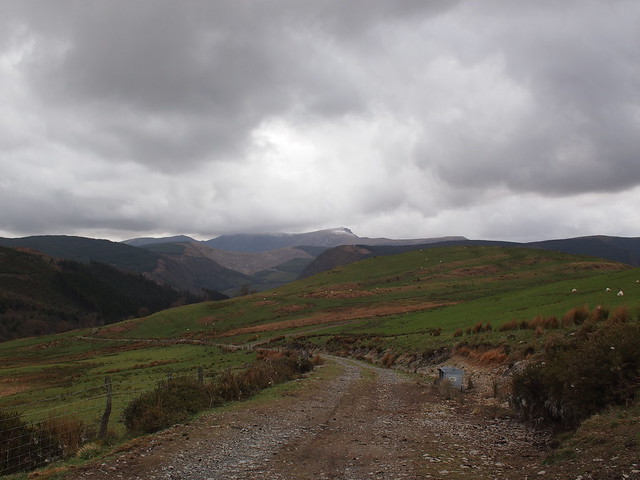 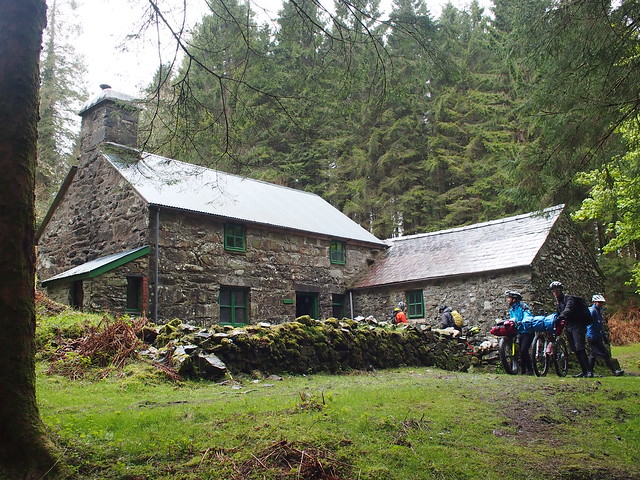 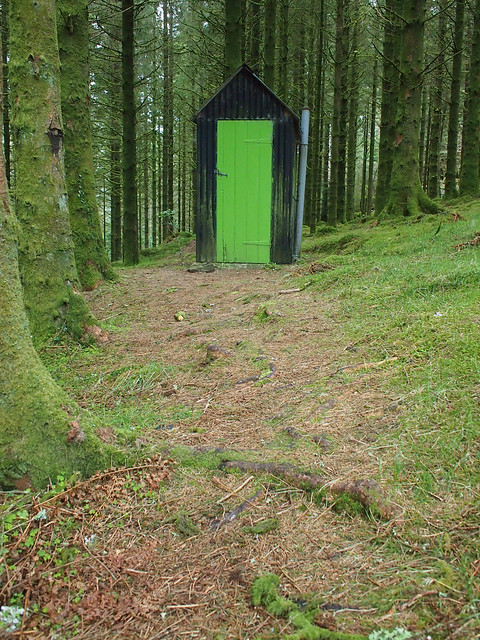 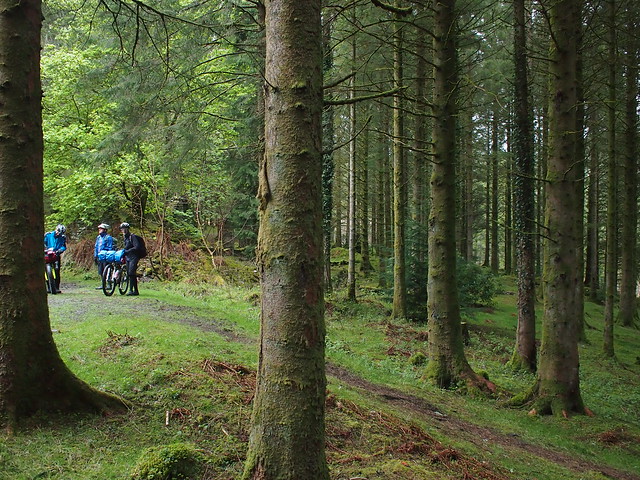 Day two dawned and it was wet wet wet! We packed up and headed for the Coed y Brenin visitor centre for breakfast, fantastic bike shop by the way, who deserve an honourary mention for sorting out Duncan’s crash damage from the previous day and getting him rolling again with a full set of functional gears. We all stuffed ourselves silly and headed back out into the rain, this was where our first wet weather option was taken. After a long off road section our original route had us going high onto an exposed ridge line, it was not really safe to do this with the high wind and so we opted for a valley route. Back down to the main road and once again our stomachs were announcing their need for a top up. We endured the main road to Barmouth and went in the amusingly named ISIS Pizzeria. No radicalisation occurred though, unless you count destruction of radically large pizza. 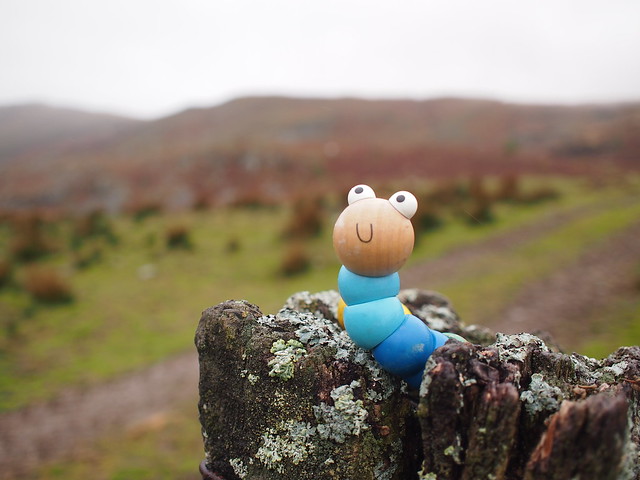 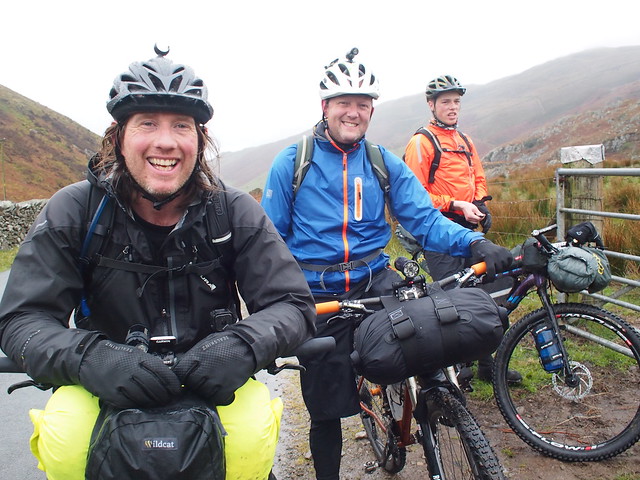 After that lot we headed back out into the rain and we were riding across Barmouth bridge, leaning into the wind at forty five degrees, whilst the Irish Sea did it’s best to try and shot blast us and chuck us in the river below. This was where we took another road option rather than what we had planned. Originally we were going for an off road up and over and then a trip to the top of Cadair Idris, but again in the conditions that would have just been a stupid move. 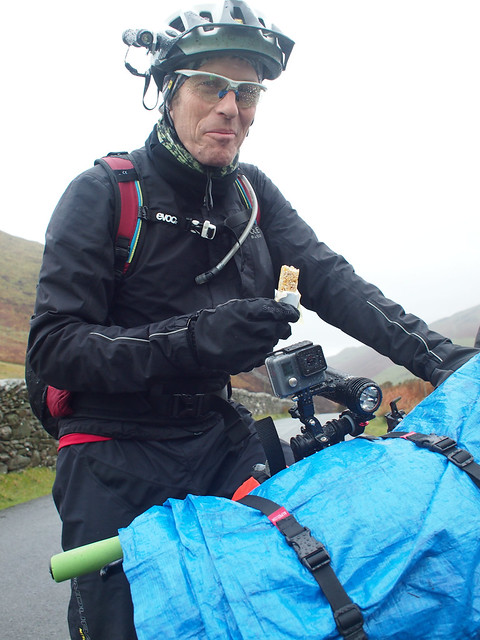 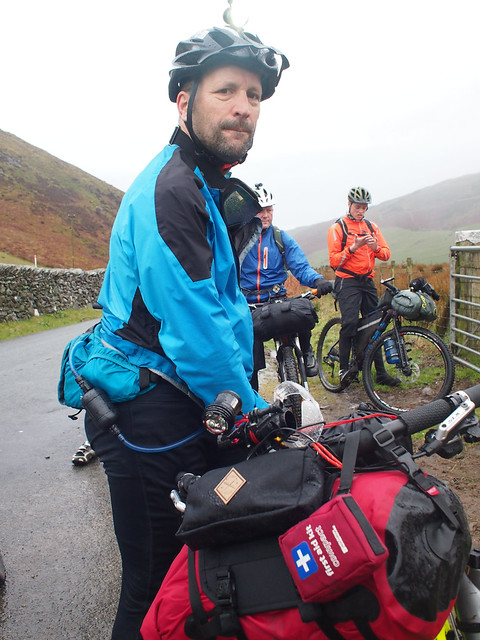 We opted for the coast road south and then rode up the delightfully named “happy valley”. It was nice to get back out of the wind (slightly) and we wound our way along. It turned out to be another of what Daryl named “FFS Valleys”, they seemed OK to ride along and then you get to the end and FFS there’s a massive climb at the end!! 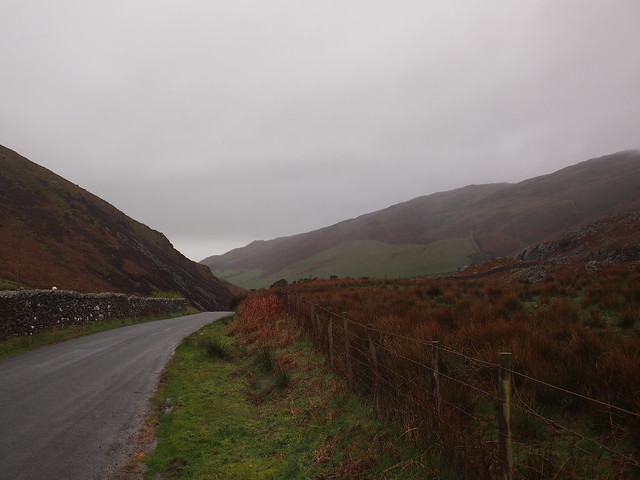 After a day in the rain though we were fantasizing over somewhere dry to stay and when we rolled back into Machynlleth we tried to find the bunkhouse that Google had listed. However it turned out to have been sold and returned to residential use, at least that’s what the woman wrapped in a blanket, drinking out of a tinnie sat outside told us.

Still wishing for at least some facilities we headed for the nearest campsite and the weather cooperated and let us put up our tents and cook dinner in the dry, amazing! We all hit the sack early as it had been a tough day and to be honest it was nice to be in a warm sleeping bag. 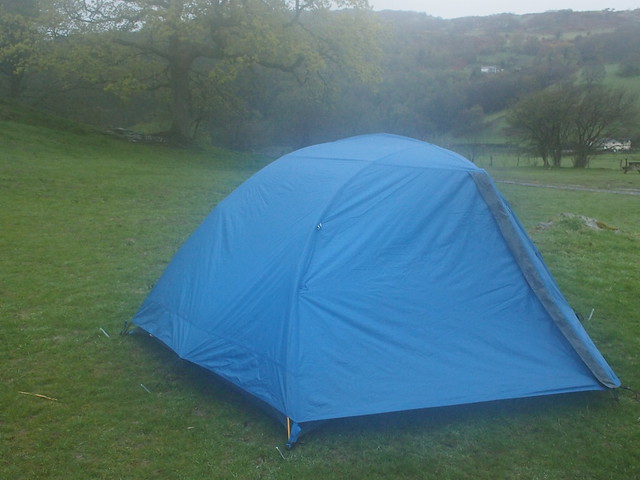 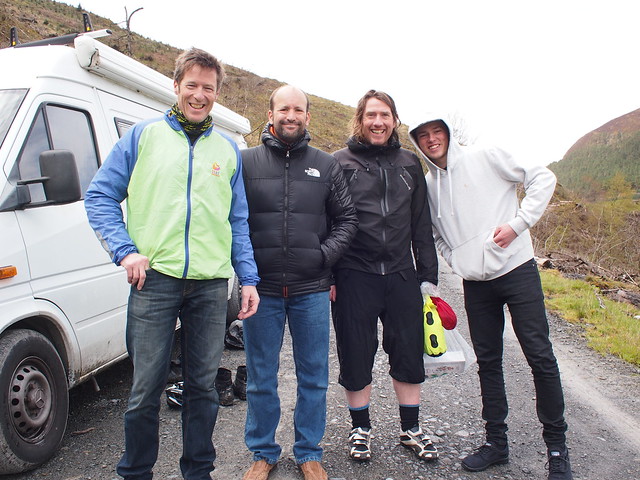 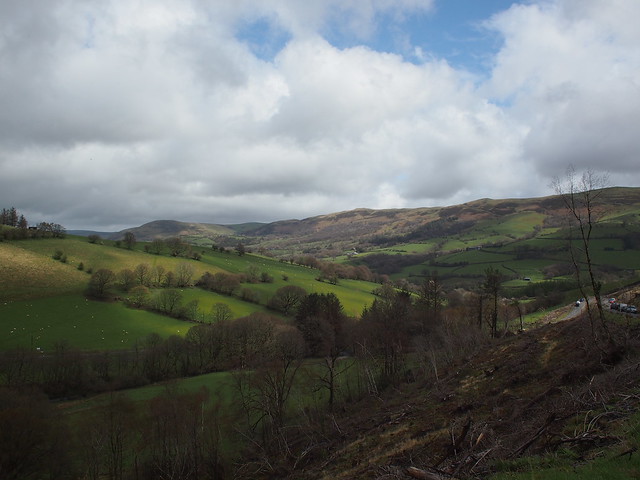 This left us with “just” fifteen miles over the mountain road to get back and we got up, packed away and headed back to Machynlleth for breakfast. Another massive feed and when we went back outside the rain was torrential again and the wind was very strong.

We grovelled our way up the road, leaning into the wind, occasionally being blown off the road into the verge completely. The upside of course was about four miles of descent, with a strong wind assistance down the other side.

Back down to basecamp and the tea urn was on. I very quickly drank four cups of tea and several bits of cake later we walked back to the van to get changed. Just to taunt us once we had all loaded up and got changed the sun came back out!! 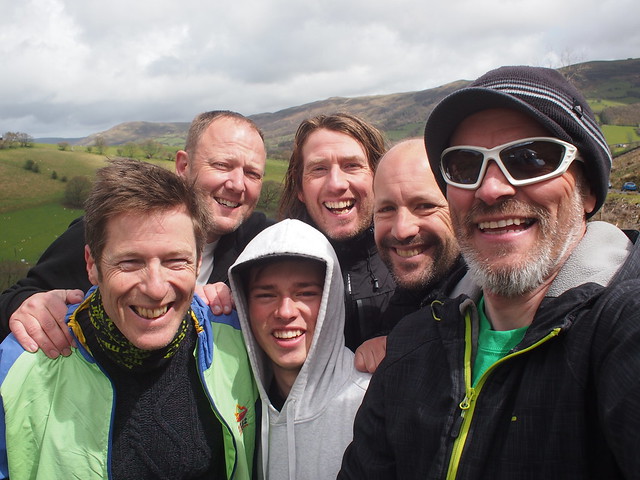 However it didn’t really matter, despite the weather we had the Welsh Ride Thing delivered again, riding bikes, fun with friends, food and laughter.

Excuse the somber music on the video, it was fun, honest!!

So as far as our kit went, we used everything we took and there wasn’t anything we needed. I make that a success, while there is no way we can plan for everything that could happen in America I feel like we’re pretty well sorted.

Not long now till we set off so if you can help us along our way by making a donation to Cancer Research that would be awesome.