Starting off from the campsite in Elkford, it was a great spot, so nice to have a shower and soothe the aching muscles. The road out of Elkford, Fording River Road, it was a nice way to start the day off. Not too hard and it got a thousand feet of climbing out the way on tarmac. We’d got going at ten and by the time we were at the top the temperature was already climbing well, we stopped halfway up to apply sun cream and get some protection. At the top of the tarmac climb we turned onto Fording Road, which was just a jeep track. The view was fantastic and as we were admiring it we missed the turn off onto the singletrack, mainly because I looked at this steep, narrow ribbon of trail and though “that can’t be it!”, well it was, but fortunately I noticed after a couple of hundred yards and we backtracked and started pushing up the tiny sliver of trail.

It was an amazing ribbon of singletrack across the top of Fording Mountain, really quite technical with a few steep descents, mainly just wider than your pedals. In places it was quite a handful on a fully loaded bike, getting back over the back wheel for the steep sections was impossible with a loaded seatpack with a pair of flip flops attached to the top with a bungee!

After the singletrack it was back onto the gravel road for about ten miles of descending, which was great fun, but it was just getting hotter and hotter. About a mile on Highway 43 proved to be rather hair raising, but then we turned off onto Lower Elk Valley Road which offered breathtaking views of the mountains each side and the farms in the valley bottom. The temperature was just going over thirty by this point and the last seven miles into Sparwood felt never ending! We stopped under the trees overhanging the road a number of times to catch our breath as we were battling a headwind all the way. 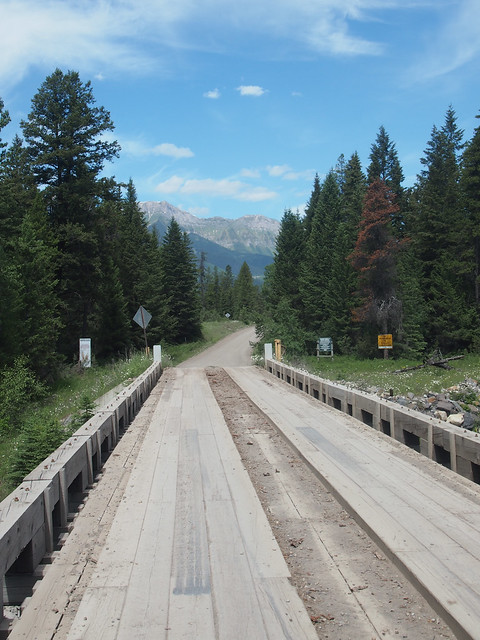 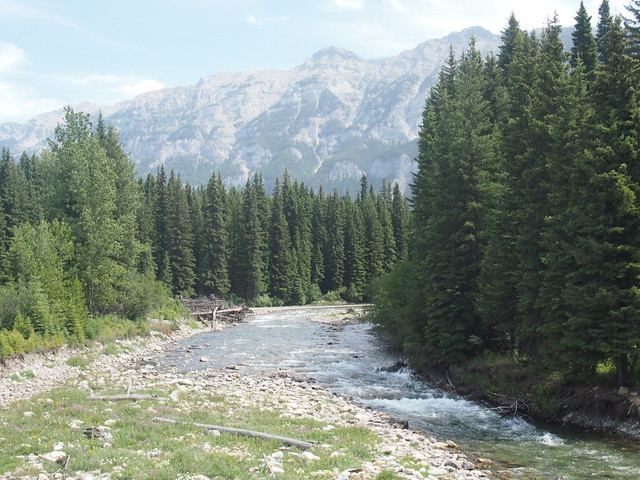 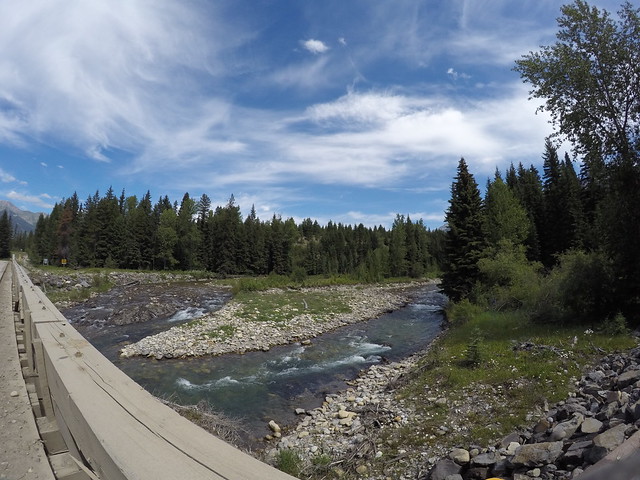 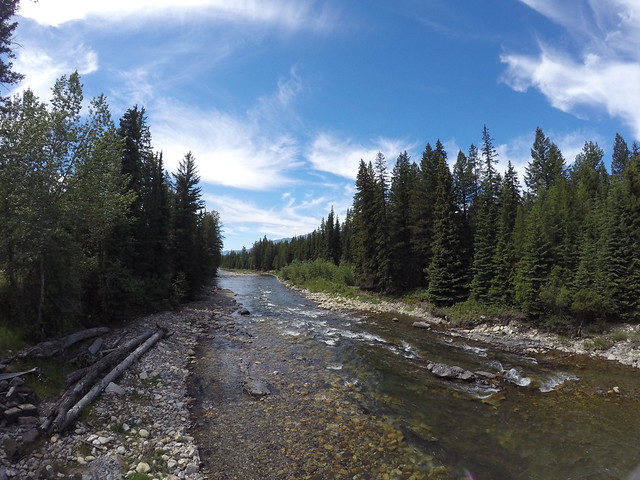 By the time we eventually made it to Sparwood we were totally cooked and were looking for some air conditioned relief for lunch. Fortunately Tim Hortons, which seems to be in most towns in Canada, came to the rescue. The couple who we had chatted to at Boulton Creek Trading Post the previous morning, DJ and Kerrie, were also in there to so we stopped and chatted to them for what, in reality, was rather too long. But we were just happy to be out of the heat. 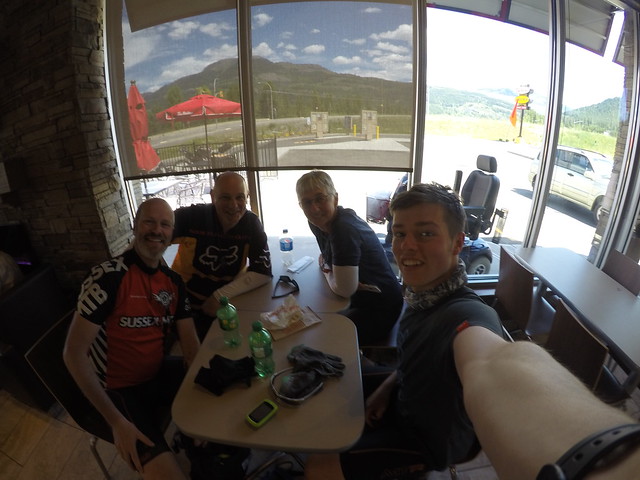 Having a decent chat with them it turned out that they had hosted Emily Chappell (http://thatemilychappell.com/), who I had seen a couple of weeks before on her book tour in Chichester, when she was fatbiking down Canada in the winter. Talk about a small world! 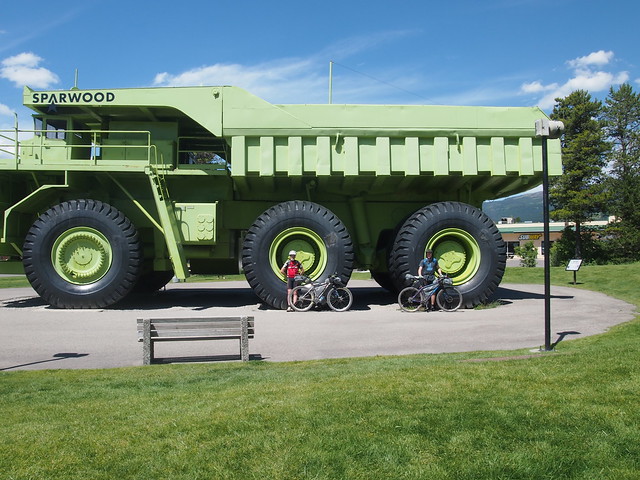 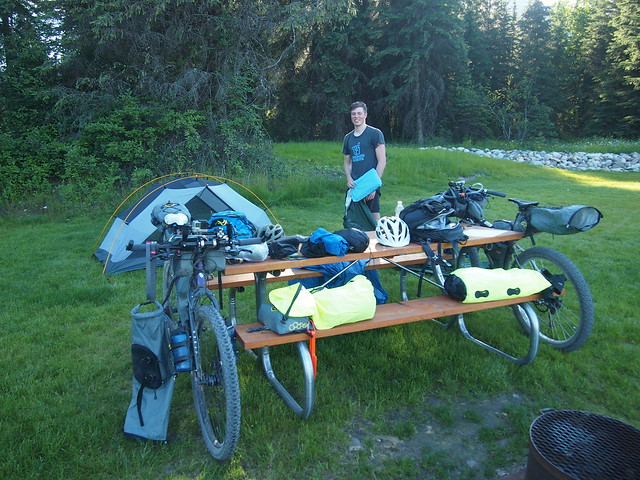 We had decided the night before that as we hadn’t been managing to cover the distances we needed each day and that, as we’d discovered pretty quickly, that we didn’t have enough spare food carrying capacity for more than a day, that we would split off to the right at Sparwood and take the Fernie alternate route. This would mean navigating by map as I only had the GPS track for the main route, but it would shave a day off straight away (it’s forty seven miles shorter) and to be honest after our bear encounters the parental part of my brain was thinking it would be better than heading into the part of the country known for the highest concentration of bears!

I realise that this is somewhat irrational and I’ve followed the Tour Divide race for long enough to know that serious bear encounters are truly few and far between, however when you are riding with one of your children two encounters on the first day leads you to reevaluate your plans and think about them very seriously. It was a risk I was just not willing to take and after having contact with a few friends I decided it was the right move for me.

We did the fifteen miles down to Fernie, most of which was on the Crowsnest Highway, In reality when I think about it from the comfort of my sofa this was far more likely to kill us both than any bear! But it just gave me the peace of mind I needed and the chance to relax for a bit and not think about bears, most drivers were respectful of our presence and we didn’t have any near misses.

When we eventually made it into Fernie the first thing we saw was Starbucks, which was a most welcoming slice of normality, with the added bonus of air conditioning. We had multiple chilled coffees, multiple bagels and took advantage of the electricity and wifi to both charge our stuff and find a home for the night.

Google revealed the brand new Fernie RV Resort that was only a mile from our seat in Starbucks, so I booked it online and celebrated with another coffee.

Over to the RV resort and we set up the tent and cooked dinner. The place was brand new and boasting all mod cons like electricity and wifi for each tent pitch. We had a great neighbour, Bob a Canadian, who had done loads of running, cycling and other stuff and was staying to do some fishing. We had a good chat about our bikes and set up as he’d not seen anything like it before, especially a 29+ bike. All the way through the conversation I was being savaged by the Fernie mosquitos, while they seemed to be leaving him alone completely.

He came back over to our tent later after he’d been out, and gave us a bottle of mosquito repellant and a bottle of suntan oil too. He was looking over my bike again as we chatted and he saw the #forjenn sticker on my frame and asked what it was about, I told him about Jenn and how she had inspired my to take this trip on, then after I had explained he took twenty dollars out of his wallet and said “add it to the fund”. An incredibly nice guy and our first example of the trail magic you hear about out on the Divide.