Today we actually set an alarm so we could get up and out earlier, we’d decided to buy breakfast rather than cook it and riding past Starbucks we saw a couple of construction workers digging the road, both wearing Fox MTB shirts, figuring they would definitely know where to get a good breakfast we asked the question and got directed to Big Bang Bagels (https://bigbangbagels.com/) in the town. We had a monster bagel each, a big coffee and bought cookies to eat while out on the trail. 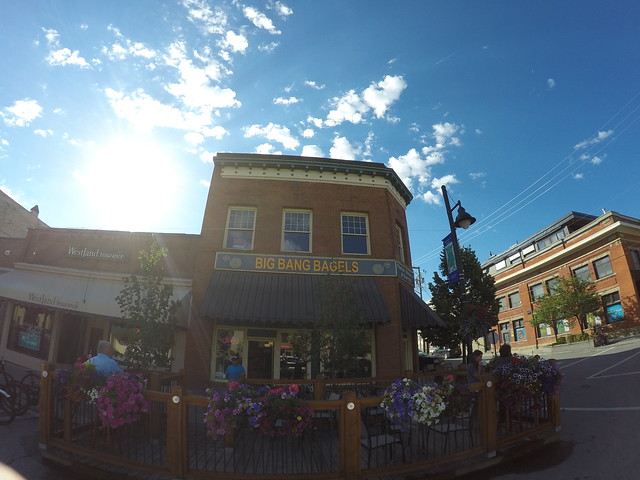 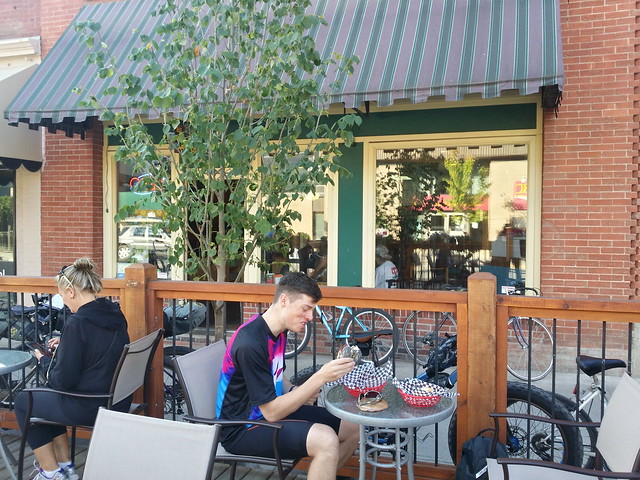 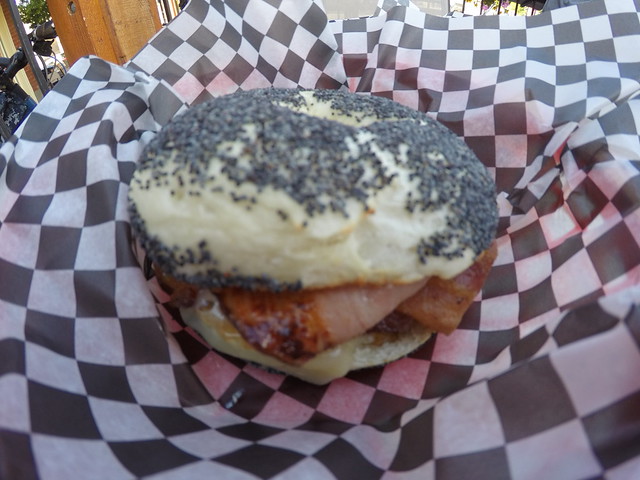 As we were leaving the town we spotted the bike shop, Gearhub Sports (http://gearhub.ca/), what an amazing shop! There’s clearly a good downhill / enduro scene locally as there were lots of that style of bike there, as well as fat bikes too. Then for the winter they had all the skiing and snowboarding kit as well as rifles and the like, not what we’re used to seeing in a bike shop in the UK!

I went in and they very kindly topped up the air in my tyres using the compressor as they were running a little low. Also as I knew there were a few road stretches today I got them to put in 15psi, which is two more than normal, but rolls along nicely. By this time Tom had decided he wanted to relocate to Fernie as not only did they have all the kit in the shop, but the other side of the railway was a set of dirt jumps and a concrete skatepark too, perfect! He’d just better get a place that is big enough for me to stay at as well…. 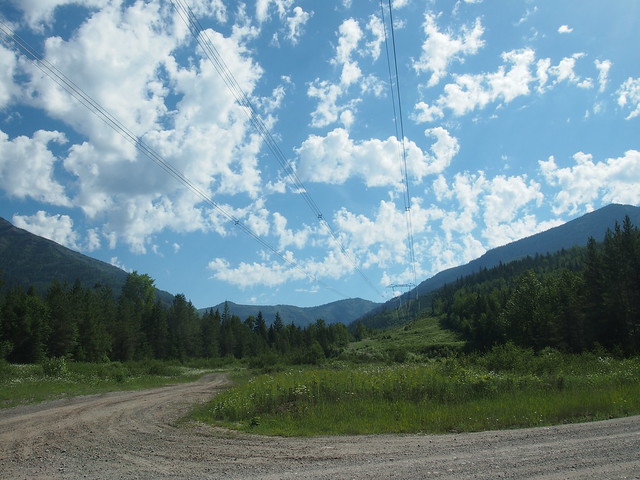 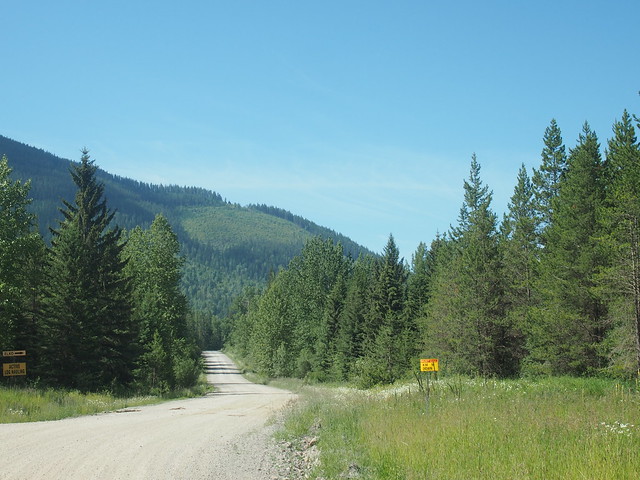 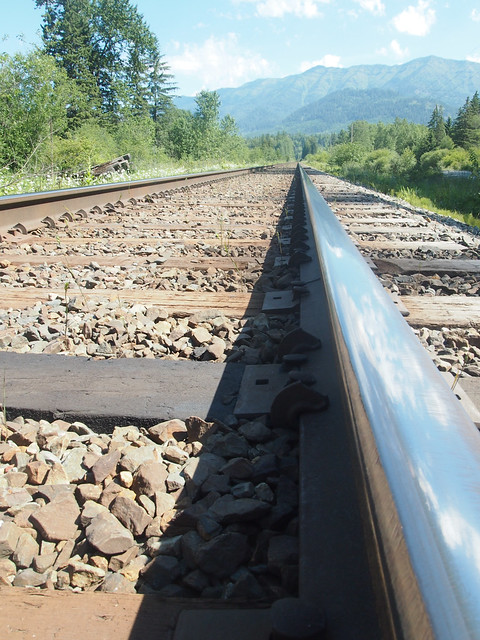 Leaving Fernie we joined Cokato Road, which eventually became a gravel road, which was about half way up the side of the valley. The views were great and on the opposite side of the valley you could see the ski runs, which are used for MTB in the summer. The road shadowed the railway line for a while and we took the opportunity to take some photos of the track although we saw no trains. We also had to dodge the logging trucks that were using the gravel road too. 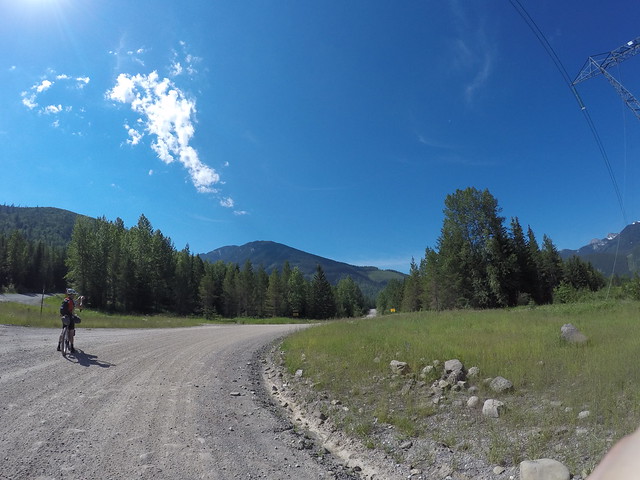 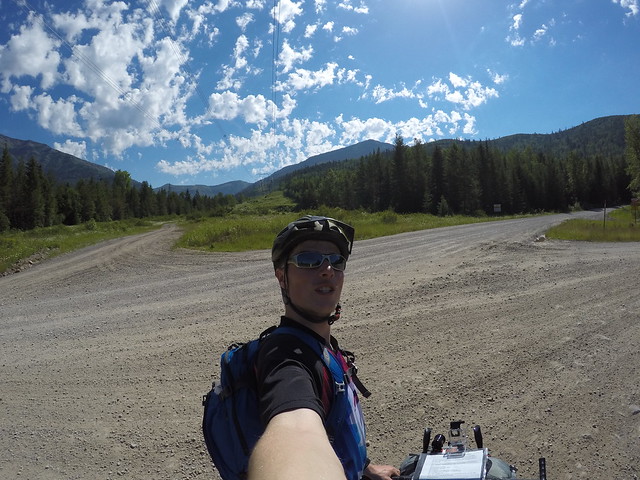 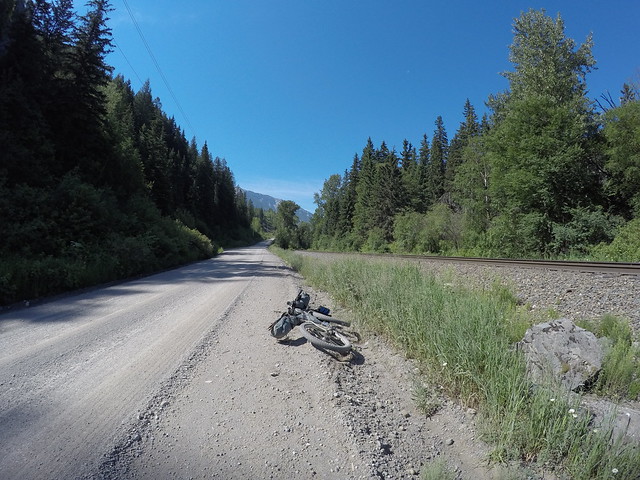 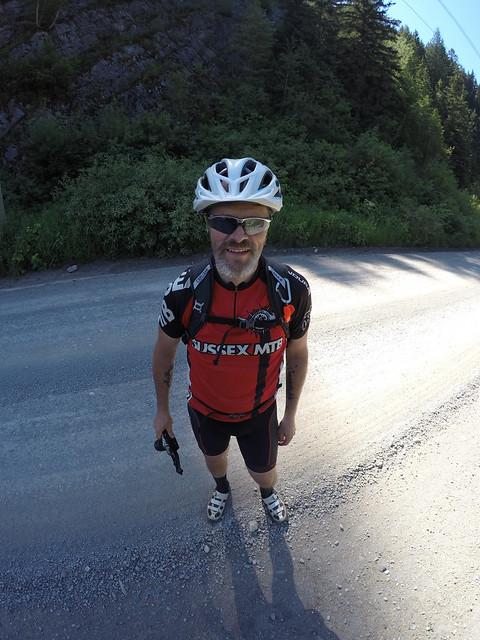 It was getting pretty hot again and the map promised a full range of services at Elko, this proved to consist of just one service station though and the food inside looked like it could do you some harm. Beggars can’t be choosers though and we opted for pre packaged with ice cream, donuts, Pringles and Gatorade, a lunch of champions. Special mention must go to the hunting gallery by the toilet door, with a memorial to a chap who had managed to shoot himself and his carcass had then been half eaten by a bear! As with the bike shop the service station had a full range of weapons for sale too, machetes seem to be popular in Elko! 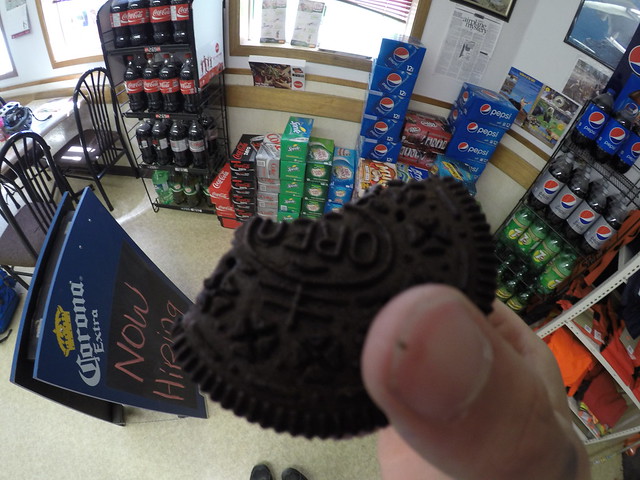 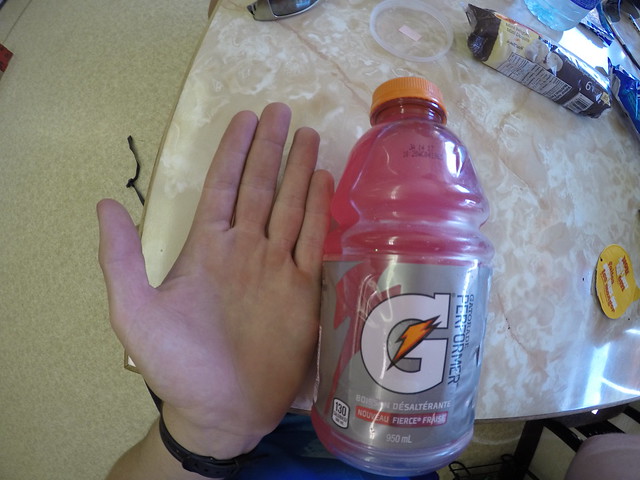 After Elko we took a wrong turn and ended up doing about ten miles on Highway 93, the map said turn left, which we did, but it was actually the second left we needed. The road went to the same place though so we stuck with it and eventually rejoined the route down near the Elk River. Special mention at this point must go to Canada’s road bridges. All the highways have a really ample shoulder which means you can ride on them and still feel safe. However when you come to a river the bridges are only the width of the carriageway. Which means if it is a long bridge, like the Elk River you need to look over your shoulder to check the traffic, then go as fast as you dare and blast across in between cars and lorries. It was actually pretty scary, though there was a decent downhill to the Elk River so we were doing about thirty five by the time we hit the bridge and just managed to get off the other side before the next truck rumbled over.

We finally turned back off the highway on to the Dorr Cutoff Road, a really nice gravel road through some amazing scenery, it was all beginning to open out a bit more so the views were fantastic. However by this point the Garmin was reading forty three degrees and we were feeling a little worse for wear, this lead to a really bad navigational cockup and as we stood overlooking Lake Koocanusa admiring the cool water stretching out for miles in each direction I realised we’d missed a left hand turn and we spent a sweltering forty five minutes riding back up the hill to the junction where we’d gone wrong. 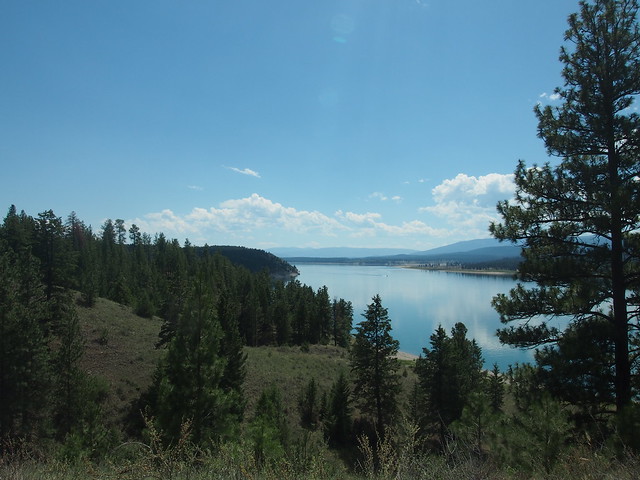 The map showed services at Grasmere and despite the fact we’d been drinking a lot both of us had stopped sweating, which is a fairly good indicator you may be getting a bit dehydrated. Back onto tarmac and down the hill to Grasmere it seemed to take forever, even though it was only about two miles and we were pleased to roll into the shop there and get even more 7up and ice cream. Grasmere wasn’t nearly as nice as our Grasmere in the Lake District, it was just a skanky shack on the roadside, but it was food and drink none the less. The shop wasn’t really air conditioned, but it was cooler than outside so ate and drank in there before heading back out into the sun for another ten miles of Highway 93 to the border.

At the border we went in the duty free shop on the Canadian side, Tom went in first and while I was sorting the bikes out a kindly gent opened up the boot of his car and got us two bottles of ice cold water out and handed them to me. More trail magic.

We chatted to the woman in the shop, bought even more water and drank it and also got Tom some replacement flip flops as his had vanished somewhere in the first twenty miles. At the actual border crossing they asked us to go into the office which was awesome as it was air conditioned! We told him to take his time and he cross examined me a bit, I guess to make sure we were going to do what we said! We filled up all our water bottles and headed out into the USA….

The Airport Road to Eureka was dead straight, hot and constantly undulating, we were so close to our stop for the night but it didn’t seem to be getting any nearer. Back on Highway 93 again on the outskirts of Eureka we bought a load of food from the supermarket and then coasted down the road into the town. Eventually we came to the southern end of Eureka and the campground, though the word campground is a bit ambitious in this case! It’s just a green squeezed in between the town office, Tobacco River and Sinclair Creek. There were half a dozen other cyclists there who were doing a road tour so we had a good chat with them. 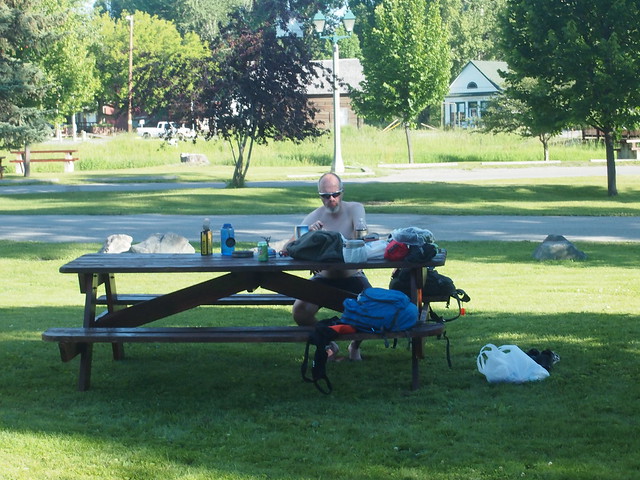 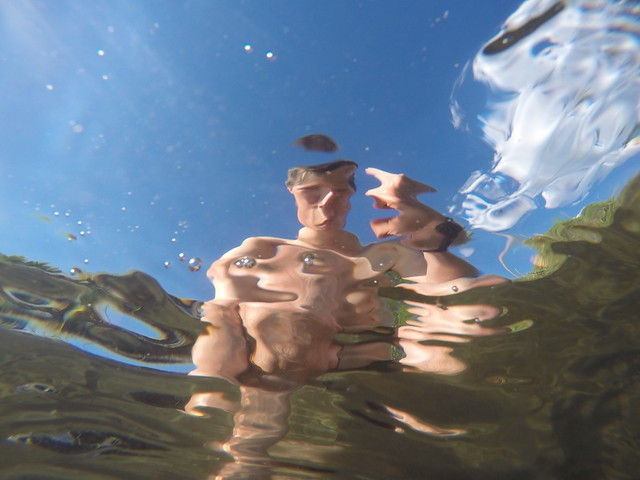 After dinner Tom decided he would jump in Tobacco river as there were lots of locals doing the same, but after I had dipped a toe in I decided it was way too cold, despite the temperature still being in the thirties. However as the showers were already shut, even though it was only being seven in the evening, the river came in handy for washing the saucepans up. We were happy to get off to sleep after such a long, hot day in the saddle.