When we got up the other group who were doing the road tour were already up and packing their kit away, we had a quick chat with them and then got on with the task of packing away ourselves before the automatic sprinkler system kicked in and got everything wet, that wouldn’t have been a good start to the day!

After the previous day’s forty three degree marathon it was fair to say we were feeling pretty tardy, Tom was in a zombified state and to be fair I wasn’t much better off. Feeling incredibly lazy we decided to buy breakfast, rather than go through the inconvenience of cooking it and venturing up the Eureka main street we saw that all the roadies had stopped in front of the Cafe Jax (http://www.visitnwmontana.com/cafe-jax.html), so that was the obvious place to go. We ended up with a bad case of cafe magnetism and found it hard to leave, but I felt so sick while I was in there and was in no rush to get pedalling. We both had two breakfasts to try and refuel ourselves.

We sat and looked at the map and decided that with the temperature, the distance we needed to cover and the lack of space for carrying spare food that we couldn’t do the Whitefish Divide / Red Meadow Lake part of the route, because we were both utterly knackered, but if I’m honest I was still smarting from our bear encounters on day one and was still reticent as to what I was doing dragging my child out into potential danger, it was something I was to struggle with all the way through the first week on and off. 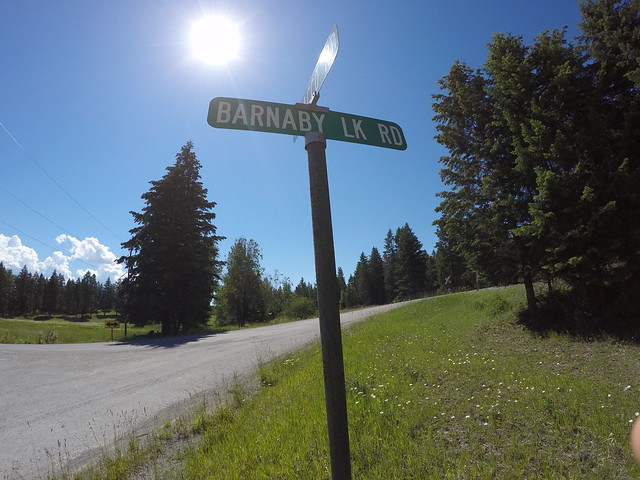 Today was a tough day, this was the only picture!

We stayed on route to Fortine and then took the decision to take the highway from there to Whitefish. Not that it turned out to be any less difficult for us, it still took all day and the traffic on the last part to Whitefish was particularly unpleasant as there was no shoulder worth speaking of.

It was really hot again and we did a much better job of managing ourselves, stopping every fifteen minutes to drink properly and have a small amount of food. We’d also put our buffs on and draped them over the backs of our necks. This kept the sun off well and every time we passed a stream we took them off and soaked them in cold water too.

The only ‘town’ worth stopping at was Olney, which was a little over half way down. According to the map it has a population of less than fifty, but what it did have was a shop. We went in and I’m pretty sure the shop, the stock and the woman serving hadn’t been changed since the forties! But it was at least air conditioned and we sat at the large dining table in there, all the time the locals were coming and going and looking at us in a very strange way. We drank 7up and ate ice cream whilst watching a game show on TV, so it was a good chance to recuperate and get out the sun for a bit.

In Whitefish we stayed at the Whitefish Lake State Park campground (http://stateparks.mt.gov/whitefish-lake/), a beautiful spot right on the lake. Tom’s front wheel was starting to display a wobble, which I knew was the bearings in the dynamo hub, which I also knew I could do nothing about. So we decided we’d have the next day off to contact home and also hopefully speak to Darren about the front wheel and decide what to do with it. Whether to buy another and ship Tom’s back home or to stick with it.

Also it was becoming obvious that we needed to scale back what our target mileage each day was, we weren’t racing and it just seemed an obvious move to try and scale it back a bit and make as much of the trip as we could possibly get done as enjoyable as possible.

Another great example of trail magic manifested itself too. When we were pitching our tent Carrie, who was camped next to us with her family, brought us over some cups of iced water and then emptied out her entire people carrier of her camping gear and dropped us both into Whitefish at the supermarket with our bikes. Totally unsolicited and yet again another example of people going the extra mile without wanting anything in return. Why cant we have a bit of this in the UK? I’m going to be doing my best to repay this trail karma forward from now on wherever I can.

Riding back to the campsite later we sat down by the lake, ate way too much, and then watched the sun go down.