We headed to Mid Wales for the Bear Bones Winter Event, the forecast for the week had shown snow and for once it had delivered with the more remote areas having a good covering. We’d decided beforehand that we would head to Lluest Cwm Bach bothy for the night as it was so cold, so when we drove up on Friday we had firewood with us that we were going to stash near the bothy and use the following night.

Driving out of Rhayader the mountain road was getting progressively more snowy and as we neared the top of the hill Big Si’s front wheel drive car was struggling to cope, I swapped to the other car that had winter tyres on and we moved on to the reservoir where we dropped the logs off in bin bags and hid them under the snow. 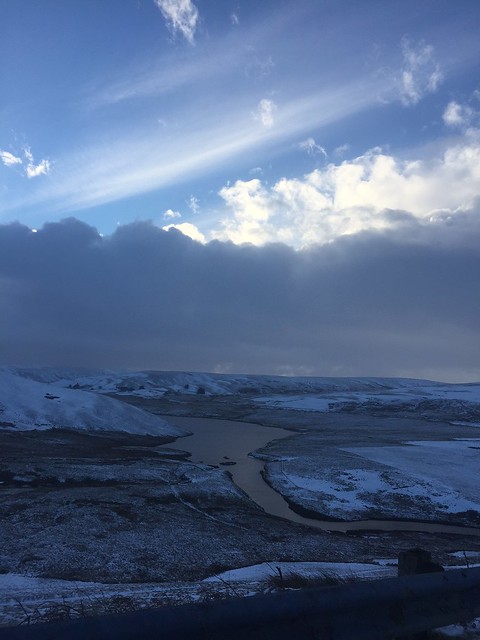 We had booked the YHA Dolgoch Bunkhouse for us all to stay in Friday night and we made our way up the valley to what must have been one of the most remote YHA’s. As we made our way up the valley the snow started, the road was getting very slippery and as we were less than a mile from the YHA the road ramps up to 25%. Again the car with winter tyres happily went up and we attempted, but ended up sliding back. Agreeing discretion was the better part of valour we backed down, put on our coats and bags and started walking up the lane into a mini blizzard. We got to the second hairpin and Simon too was stuck, so after a bit of discussion on whether to walk to the YHA or not we decided to head back the way we came and find somewhere else to stay. So Simon’s car was freed from it’s spot and we headed back, fortunately he’d put a shovel in the back before we left! 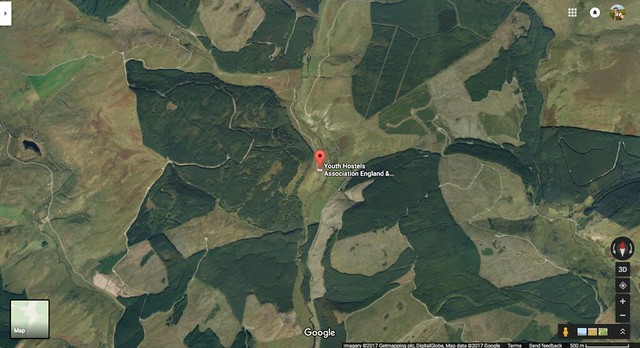 Eventually we got a phone signal back near Rhayader and googled another bunkhouse. Fortunately the snow had stopped and we found another one nearby, the Mid Wales Bunkhouse. We got lucky, they had space, the price was right and the place was great! I think it will become a handy stop over for us now on the way to Bear Bones events.

After all the stressful snow navigation the evening was rounded off with single malt and cards against humanity, it’s safe to say we all chilled out. 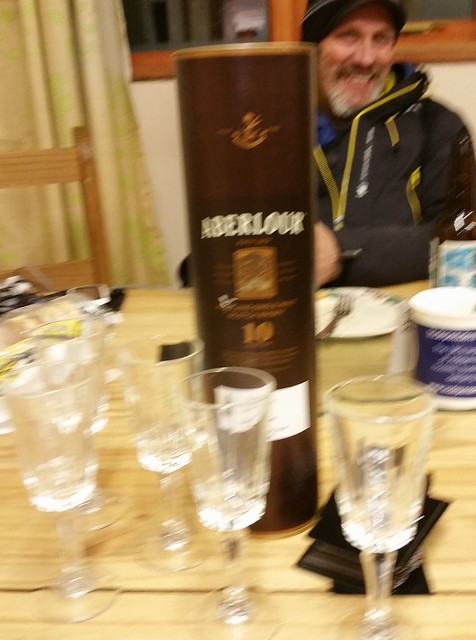 An accurate representation of how it went!

Amazingly we all managed to get up at half six and we headed off to Llanbrynmair for the start of the event. For once we were actually early and some of the first there, so we sorted our bikes out and got kitted up, ready to roll out as early as possible. We also met up with John, a fellow Travers Bikes rider, who was looking for some people to ride the event with. Eventually six of us rolled out, with Duncan and Richard following on a few minutes later.

We dragged ourselves up the first climb to Staylittle and the rain started falling! After a quick discussion we decided that because of the rain and the temperature we would skip the off road bits we had planned, John had put together a few cut offs that would enable us to more or less stick to the route, but use some road sections too.

We headed south, all the time spotting blue sky and sun, but unfortunately in each case it was not in the same valley as us! We skirted the west side of the reservoir and headed down to Llanidloes. More road got us to Llangurig and while we refuelled at the Post Office and searched out additional logs for fuel (which they kindly supplied from their own home supply) we again modified the original plan. Getting to the bothy on the road meant going all the way to Rhayader and with bad weather and light fading in a couple of hours it wasn’t an attractive option.

Duncan and I had taken a super steep bridleway on our first WRT and we decided that we would do the same one again. Although it would essentially be a hard, steep push to the top of the hill, it would chop off a lot of miles and be a bit quicker.

So we headed up the bridleway, which very quickly became pushing only, the higher we went the more indistinct the path became until it eventually disappeared under snow, leaving us following the dashed red line of the path on my Garmin screen. Eventually we all topped out onto the snowy plateau and ended up pushing across the snow covered bog to the road. Somewhat elated after what we had put ourselves through had worked out OK, we were ready to head for the bothy. 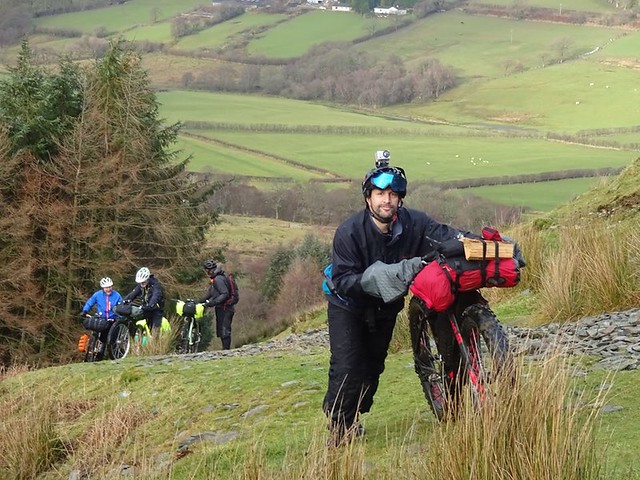 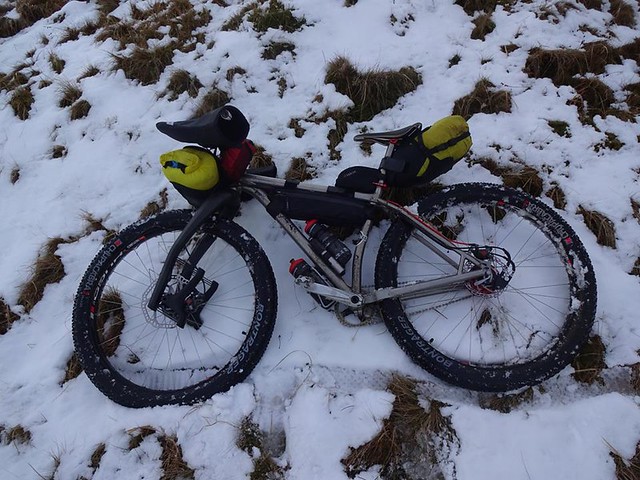 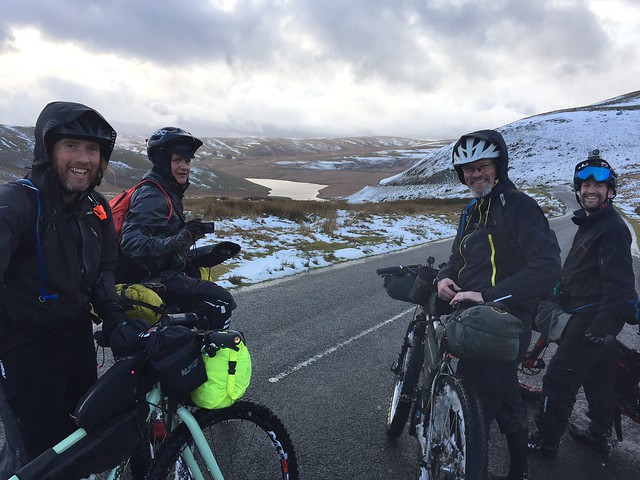 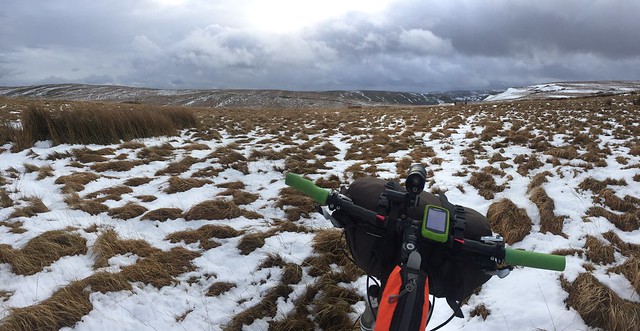 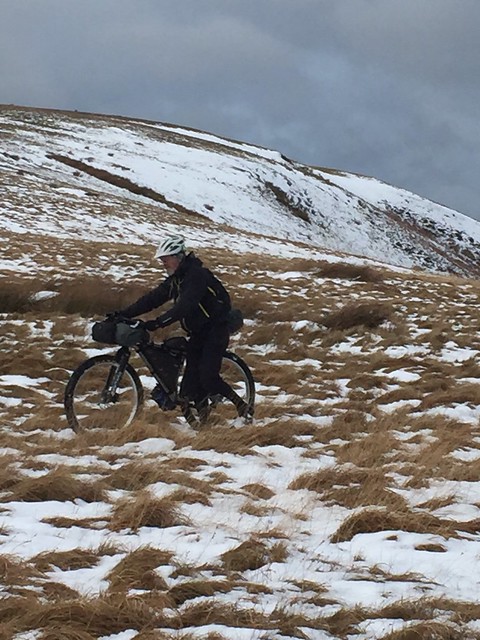 A couple of us headed for the wood hidden by the bridge and the others set off across the bog in the direction of the bothy. It had been a tough day out because of the weather and we were happy to be riding to the bothy and the chance of a warm fire, but hang on, there was smoke coming out the chimney already! 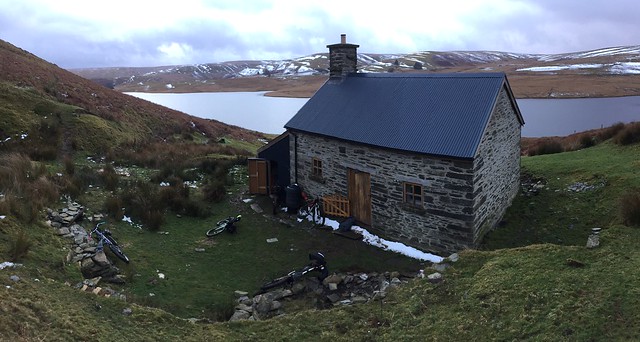 We bundled in, I suspect much to the dismay of the young couple who were looking forward to a night away from it all in a remote location, well, they got some company too! We stoked the fire up and hung all our stuff out to hopefully dry up a bit. 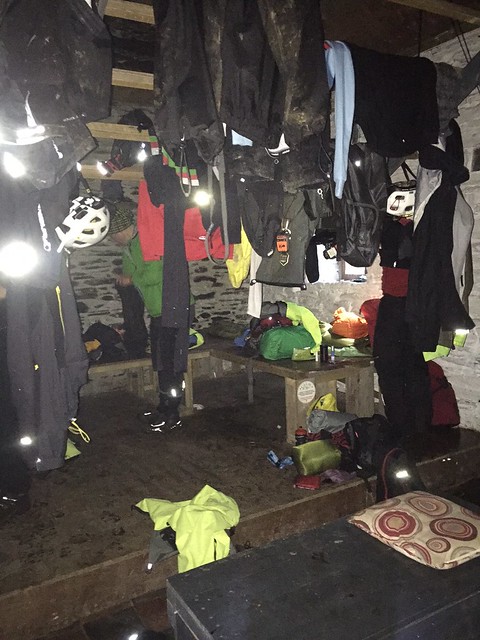 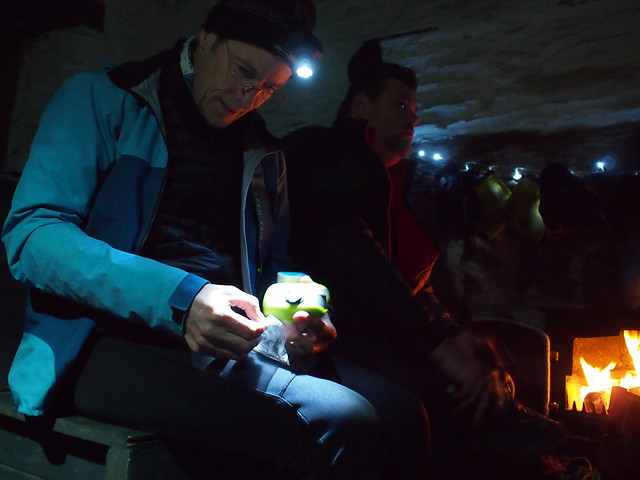 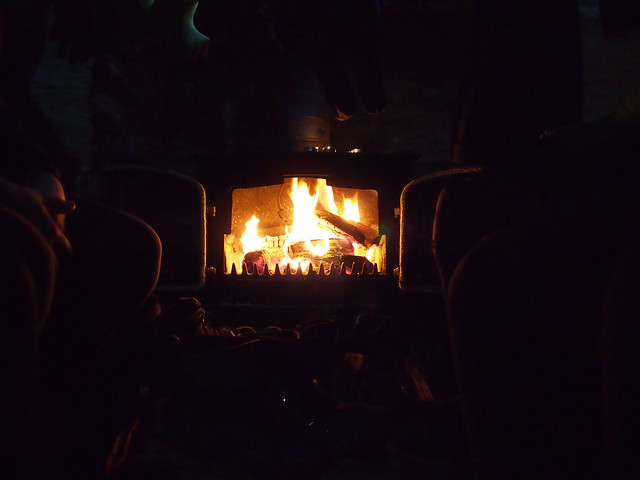 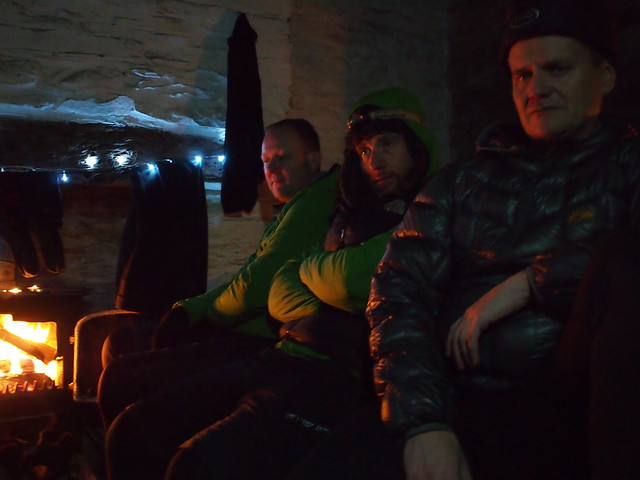 We took it in turns to sit next to the fire and all cooked our food. I was glad that I had stuck extra clothing into my bag and put on my heavy weight merino top, merino mid layer, down gilet and down jacket! I looked like the michelin man, but I was warm and that was the main thing.

Some more bothy chat and whiskey later and we were all ready to turn in for the night. I’d love to say that I had a good night’s sleep, but the frankly gargantuan amount of snoring that then followed meant I had a rather fitful sleep and certainly not a full night. Thank god for the iPod, it’s what stops me murdering snorers at night! 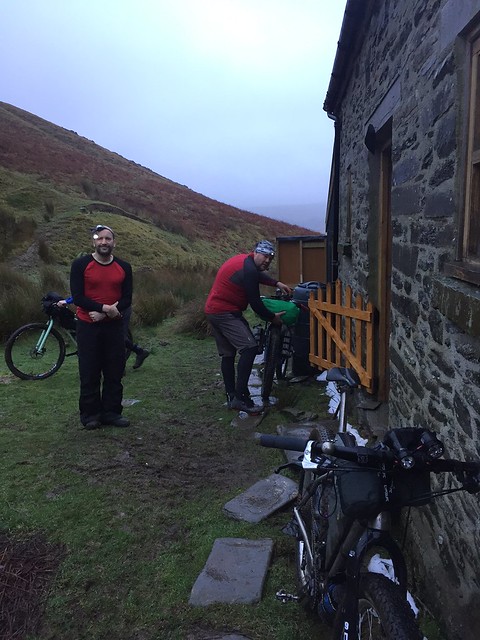 Eventually we managed to drag ourselves out the bothy at about nine and head for Rhayader down a screaming fast descent. The cafe was still shut, so we got some snacks in the local shop and then set off for Llanidloes. 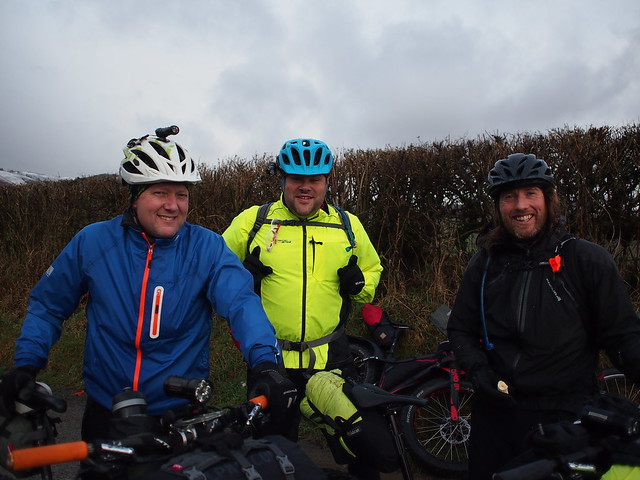 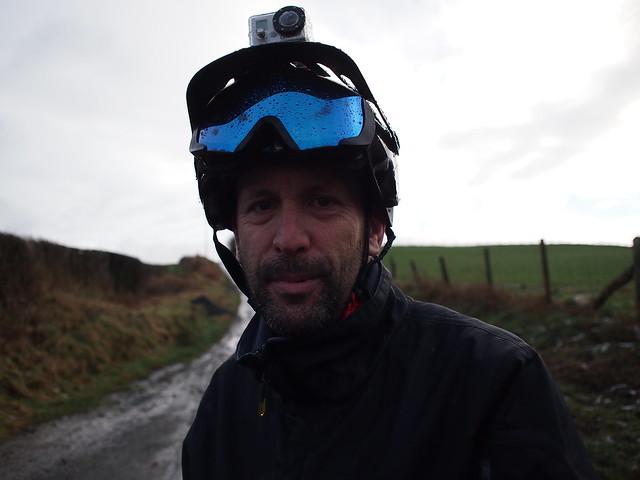 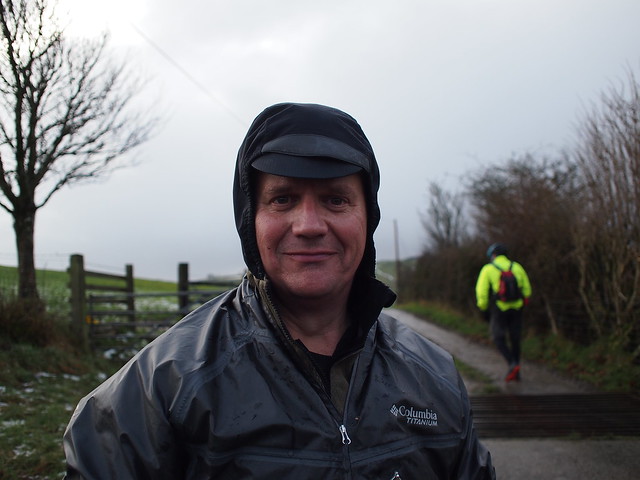 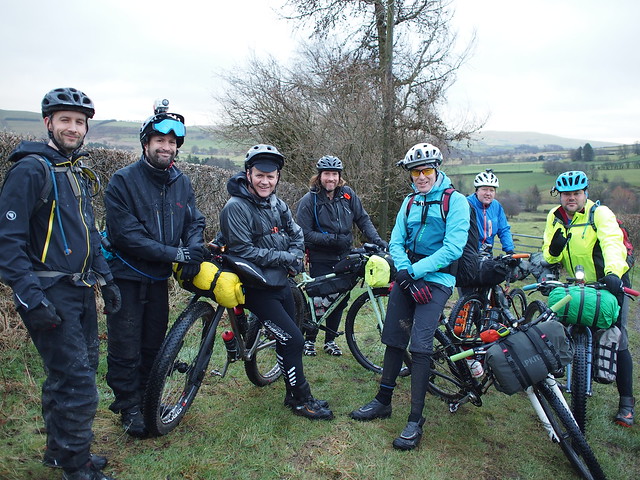 It took a while, but we rolled into Llanidloes just in time for lunch and went to the rather excellent cafe there, a favourite of ours when on Bear Bones events. Probably doubling their Sunday takings in the space of an hour! 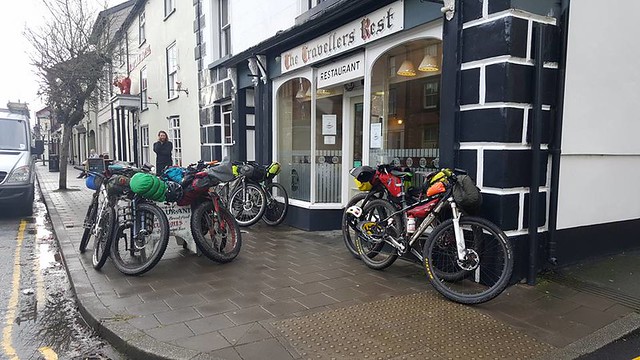 We’d spotted an alternative route on the map which meant we could stay off the main road and also skip a couple of hills in the process. That turned out to be a good choice, although there was one absolute mega hill in the middle of it, but we knew it wouldn’t be flat anyway. John and I compared Travers at the top of the hill as we have pretty different set ups. 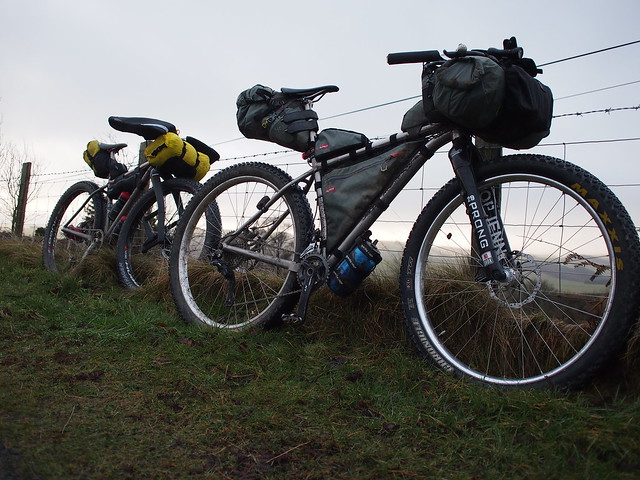 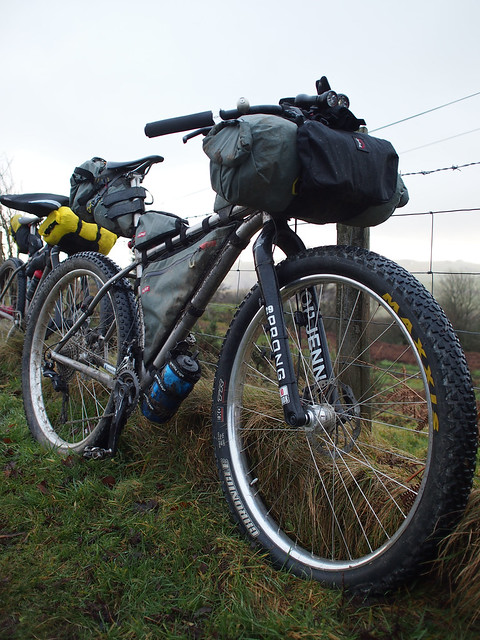 Mine, the Travers Russ Ti 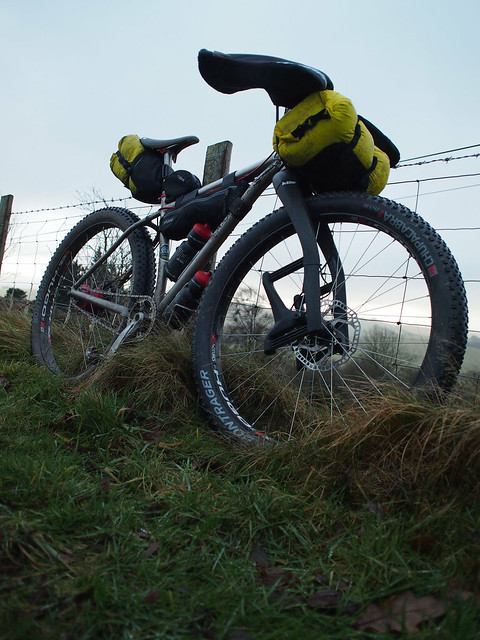 As you can see I have a standard 2 x 11 derailleur set up, where as John has the altogether more weather resistant Rohloff internally geared hub, he also has a pair of the rather funky looking Lauf suspension forks. 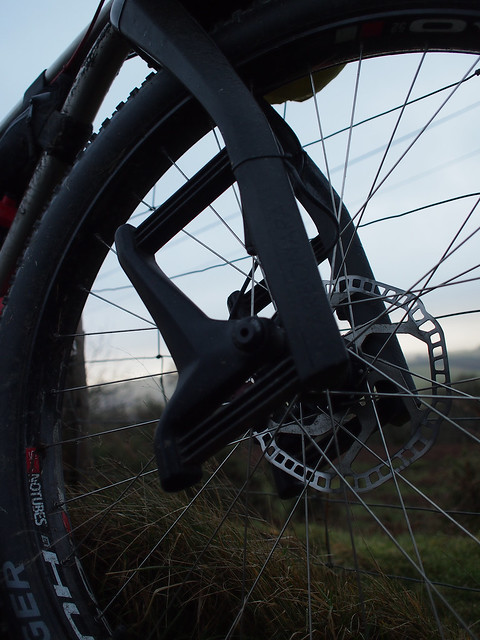 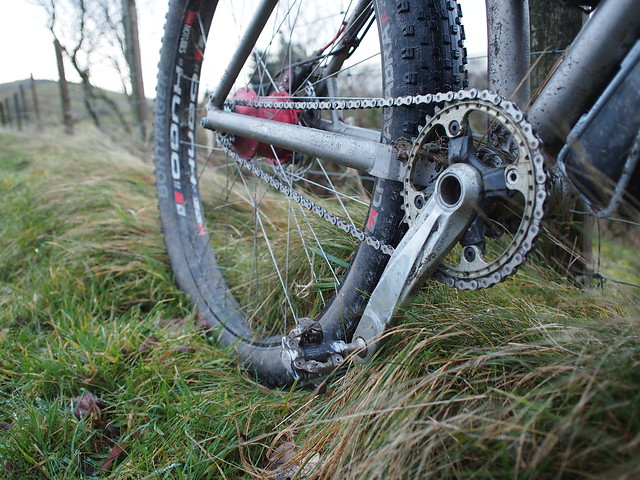 All that was left was the long road back to Llanbrynmair and finishing off with a non pedaling race from the top of the hill to the Pennant sign. 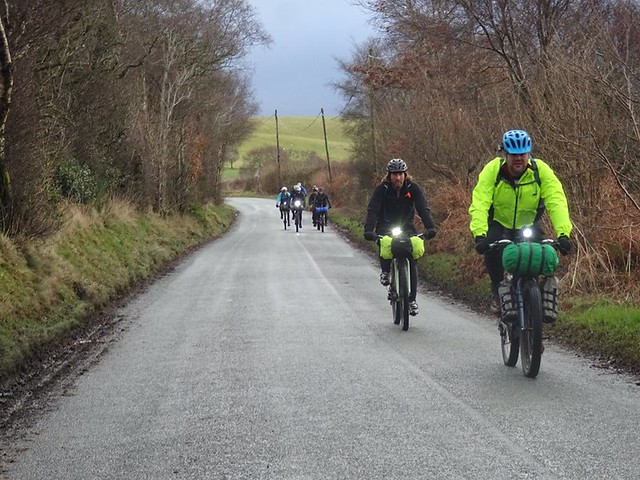 It was another great event, the weather played ball for 50% of the time and we were all left feeling pretty happy after a tough couple of days riding in the winter elements.