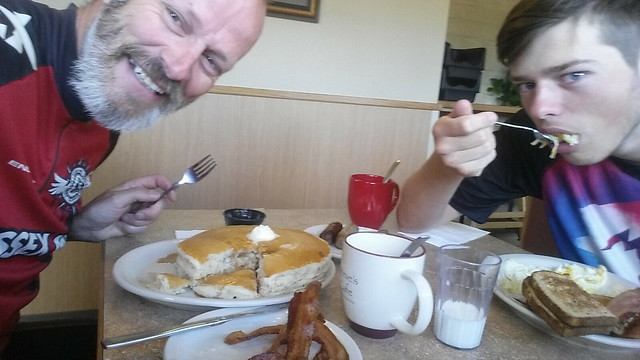 Today started off with yet another breakfast at Steve’s Cafe. Jeff lent us the Helena South Hills trail map and we decided that we would tackle the Mount Helena Ridge Trail, a trail than ran the whole ridge you can see from the city from south to north, finishing back in downtown Helena. 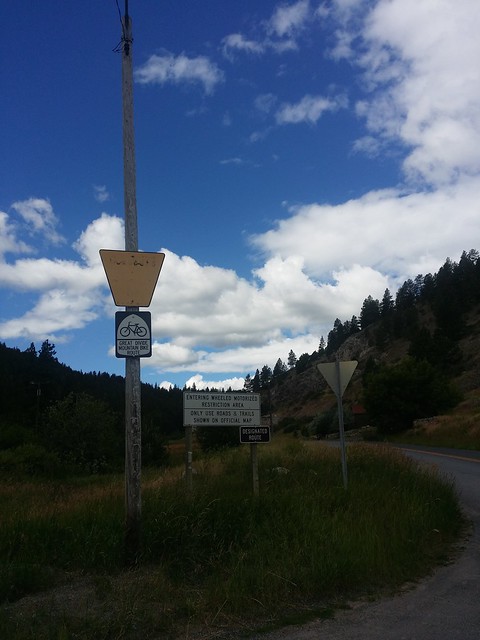 The only sign we saw on the whole trip!

We rode south out of Helena on the Tour Divide route, down Grizzly Gulch, fortunately, all the way to the amusingly named Park City. Amusingly named because there a few houses, not a city, and there is no park! So that was a six mile ride out the town, climbing all the way, up the the trailhead. We took a look at the information board in the trailhead car park to see if there was anything we needed to know, it turns out there was: Use caution, mountain lion activity in this area. 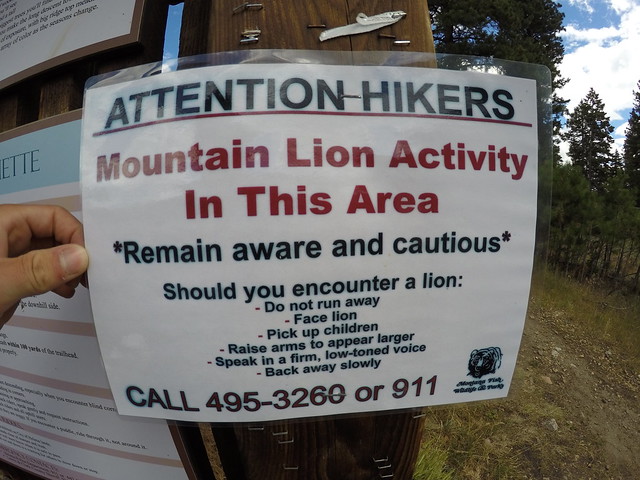 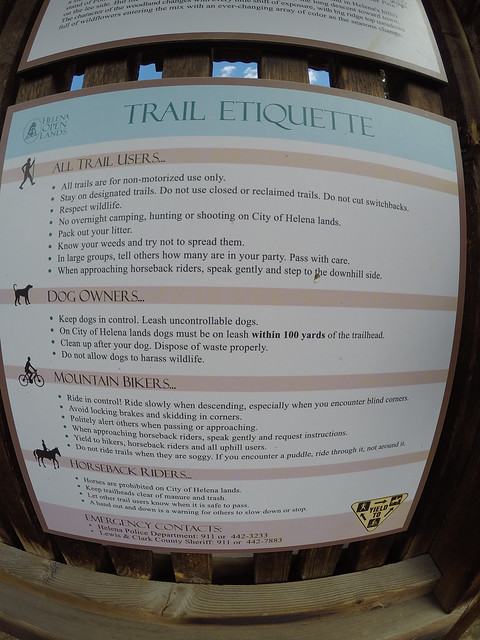 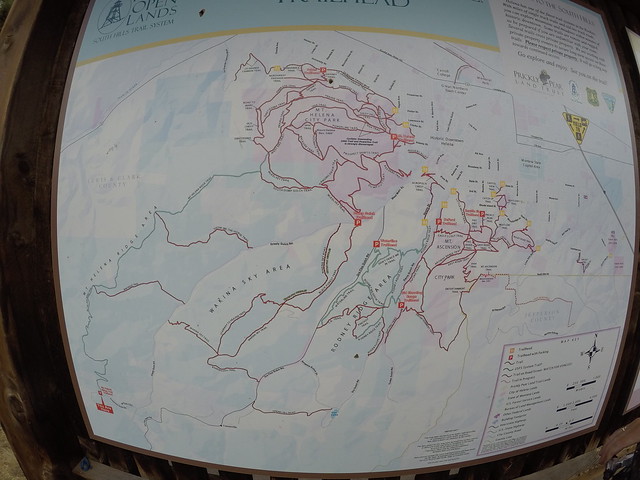 Great. Well we decided to be as attentive as one could be in this situation and just hoped the mountain lions would add themselves to the list of animals trying to scare the crap out of us. The first few switchbacks of the climb up to the ridge trail we quite steep, it was out of the wind and super hot so it was quite hard work. However once we had gained the top of the ridge, which was nearly six thousand feet, there was a bit of a breeze and it wasn’t too bad. We started to wind our way back towards Helena. 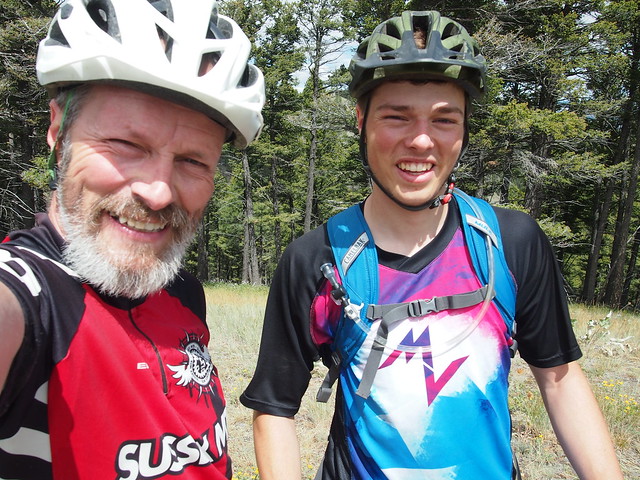 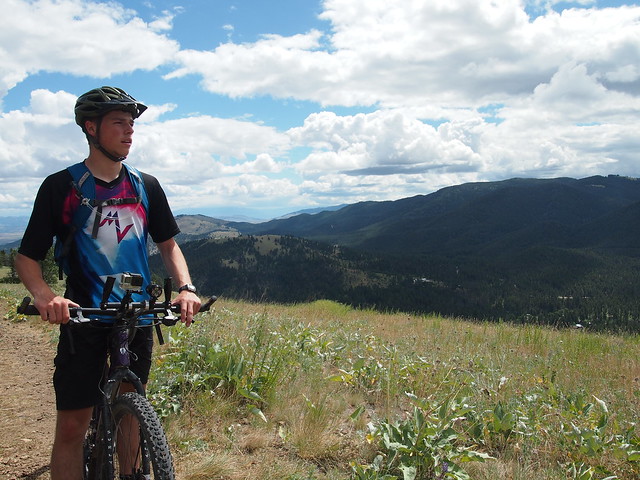 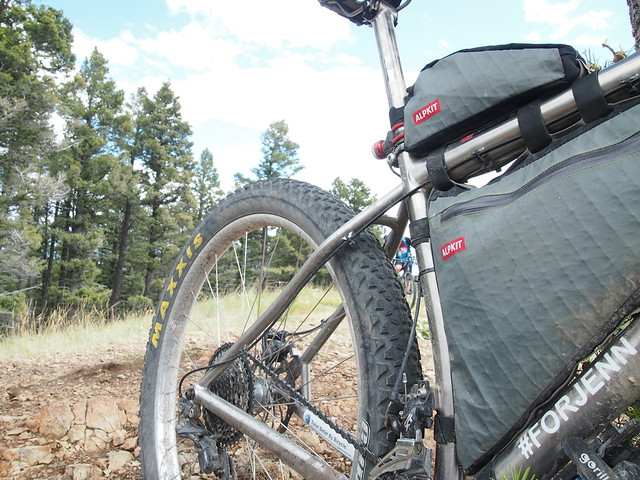 The trail was great, awesome singletrack, sometimes wooded, sometimes out in the open. Rock gardens, steep sections, switchbacks, it had it all. We got the chance to test our mountain lion awareness too. I hadn’t mentioned it to Tom, but all round the first section there was, what I assume, was mountain lion poop on the trail and it was keeping me hyper vigilant. At this point Tom decided to plough through a rock garden without looking where he was going. Then followed our first and only puncture of the entire trip. In the UK it’s easy to sit in the sun and enjoy taking your time sorting a puncture out. Yet again the perceived pressure of being in a location where the local wildlife can eat you meant that despite the good conditions this mechanical was quickly sorted, with a great deal of looking around over our shoulders going on at the same time! 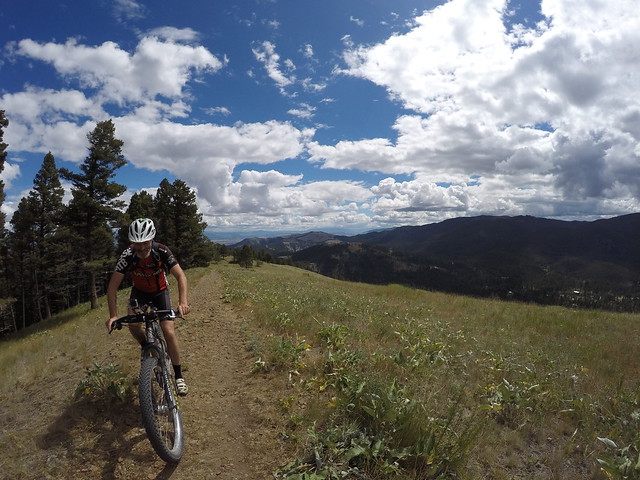 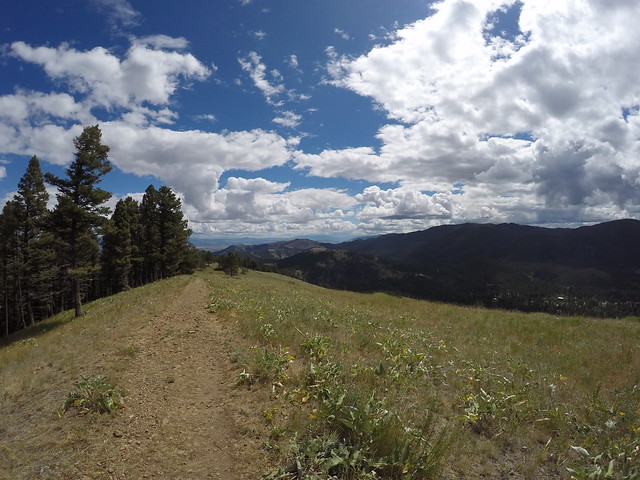 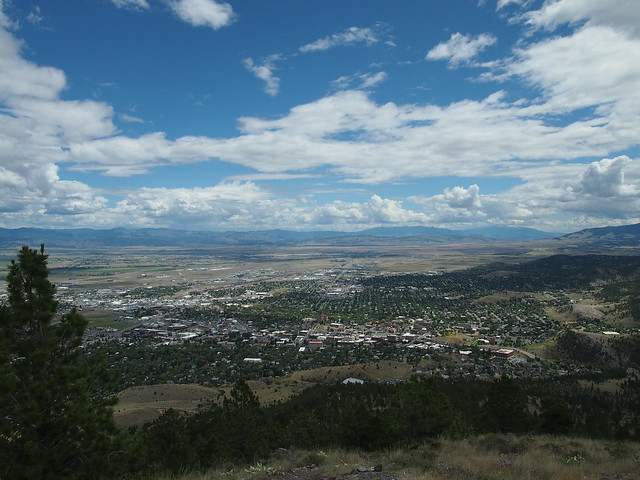 At the end of the ridge most of the other trails that come up from Helena join too and we took the West End Trail, then the 1906 Trail up to the top of the mountain. The top of Mount Helena was curiously lower than the other end of the ridge, but the views across the city were amazing. We could see the divide route where we had come from previously, over in the far distance too. Also as we had decent phone connectivity we did a live Facebook broadcast from to top too, just to say hi to those back at home. 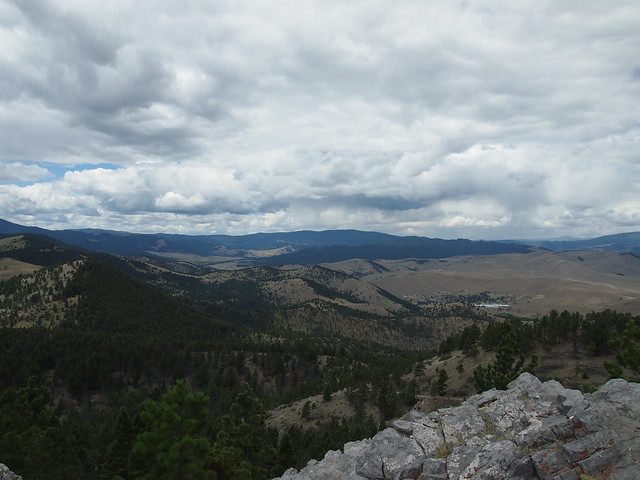 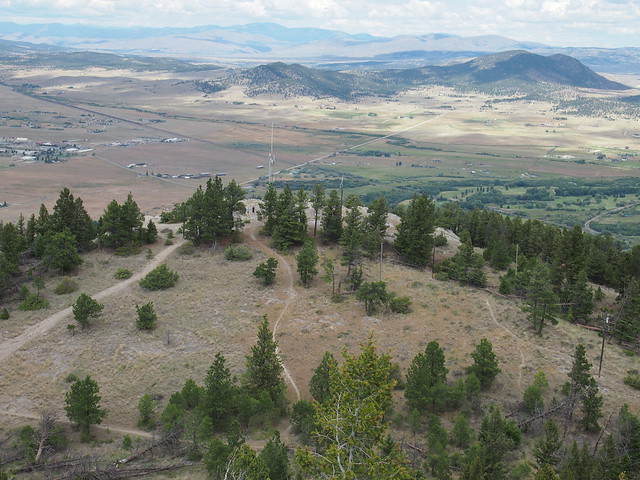 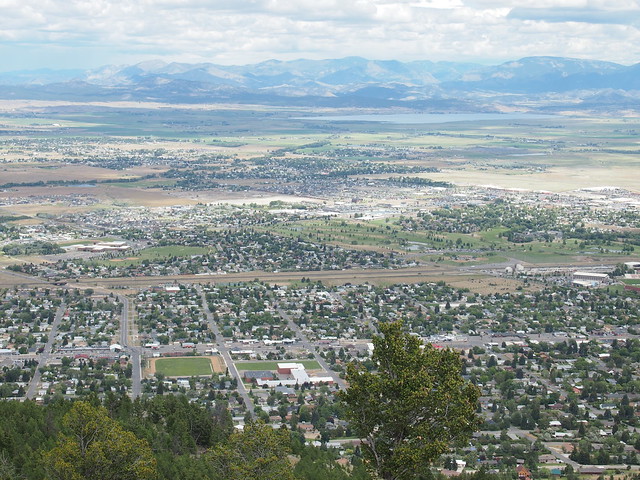 Finding the route off the top proved slightly more complicated, two of the trails back down were off limits to mountain bikes, so we settled on going back down the West End Trail and then took the Prairie Trail back to town. How awesome was that? Wooded switchbacks, eventually opening out onto a super fast section through the open prairie and then down to the car park at the south end of town. Large grins all round. 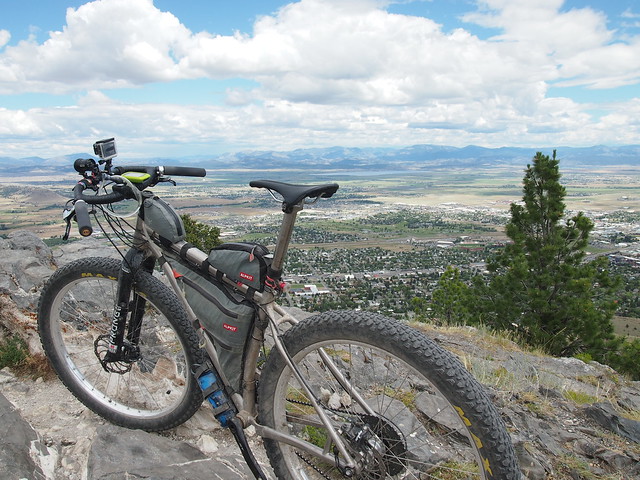 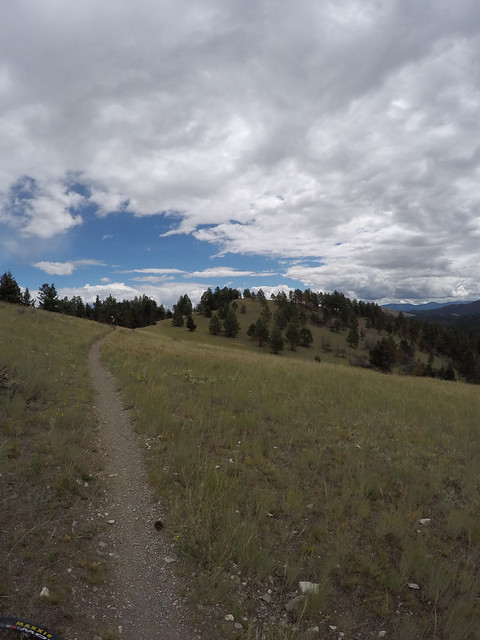 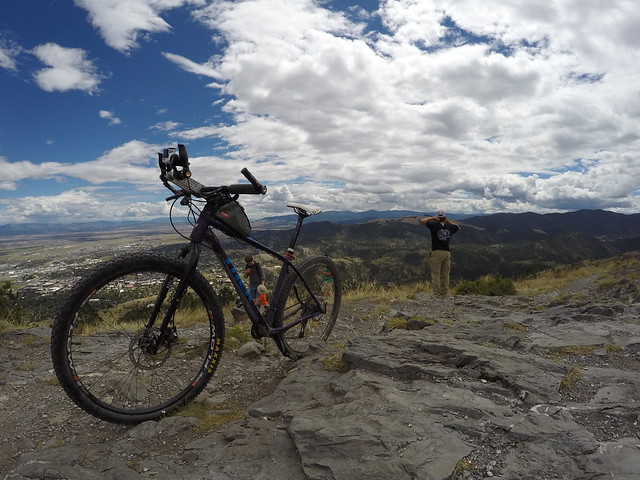 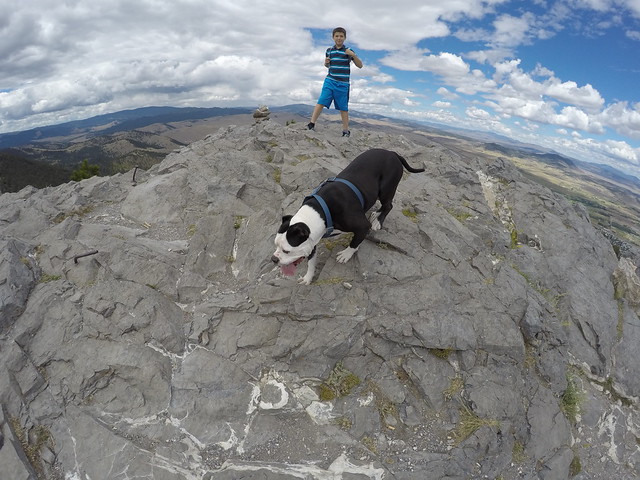 Back in town we went into the Great Divide Cyclery to get some Stan’s fluid as I’d used up my emergency bottle getting Tom’s front wheel going again up on the ridge. They only had the mega big bottles, which I was not about to carry further south for the rest of the trip so we went next door. Curiously there are two bike shops next door to each other!

The Garage, which was the shop next door, was far more of a downhill / enduro place, but they were able to top both of our bikes up with fresh sealant there and then and I got the small replacement bottle too. They were a great bunch of guys, we talked to them about the trail network and which trails we should have a go at next while they were sorting our bikes out. All that work got done for the ridiculously low price of fourteen dollars! 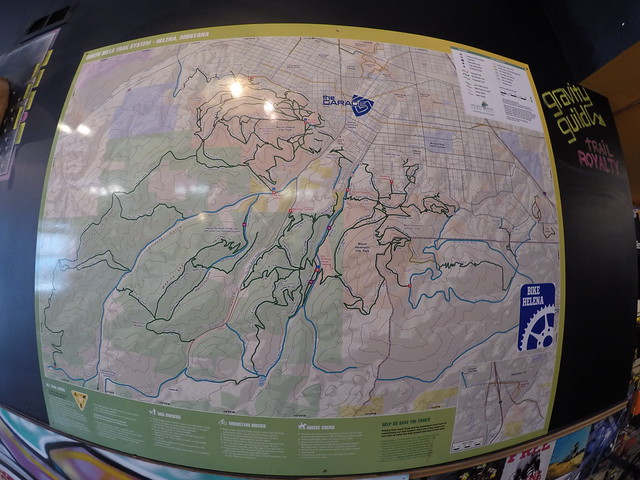 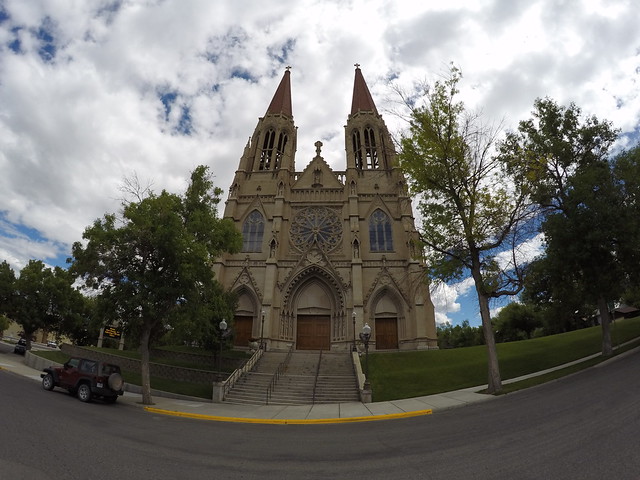 We’d had a reply from Dawn and knew we were moving on to her place just outside Helena tomorrow, so we had a relaxing afternoon and went back to Jeff and Sue’s to sort our kit out and get it all together for the following morning.

It was a good day, we’d ridden some sweet trails without having loaded bikes and bodies, and we were feeling a little more like our usual selves again!!