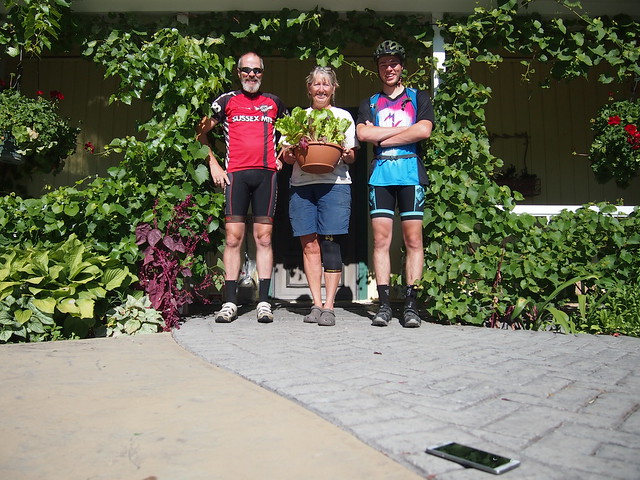 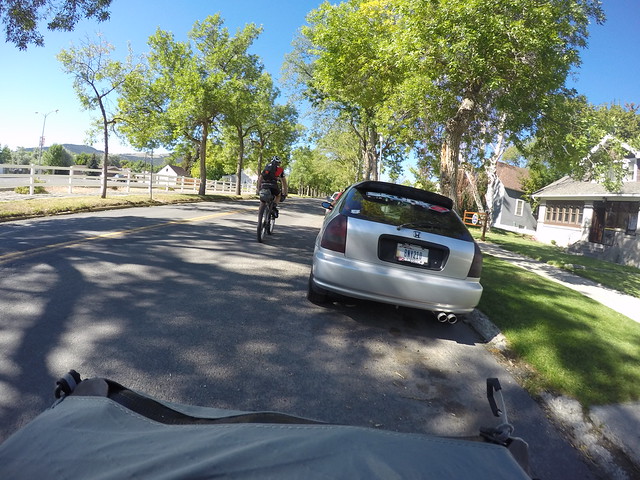 We said our farewells to Dawn and rode to Steve’s Cafe for our final mega breakfast in Helena. The trail out of Helena was the same as we had ridden previously when we rode the Mount Helena Ridge Trail, up Grizzly Gulch, happily still with no grizzlies! it was eight miles up the first climb, there was a reasonable amount of traffic on the gravel road and we were trying to stay on the left hand side as there was some shade there. So there was a little left and right traffic dodging going on! We were stopping briefly every fifteen minutes to make sure we drank properly and we got it out the way in about an hour and a half. 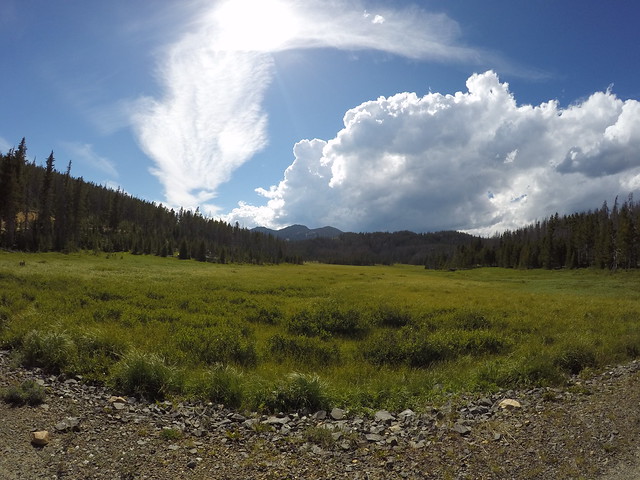 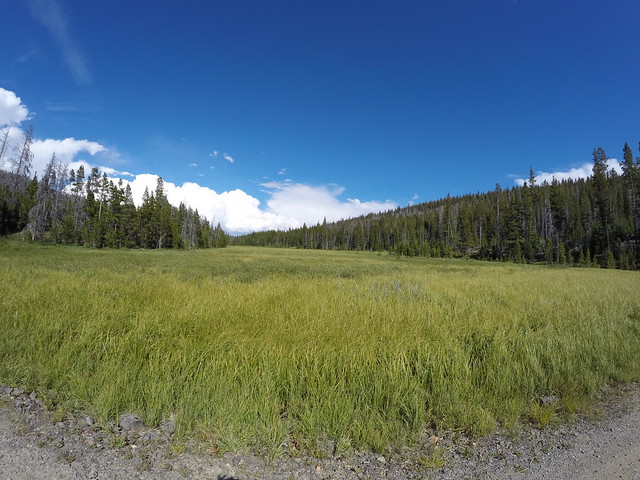 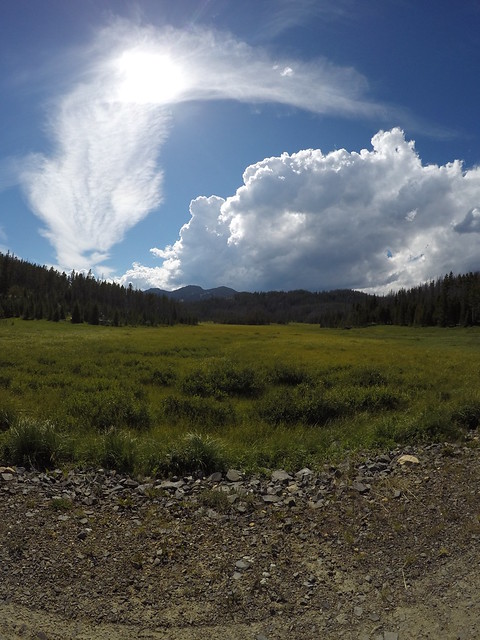 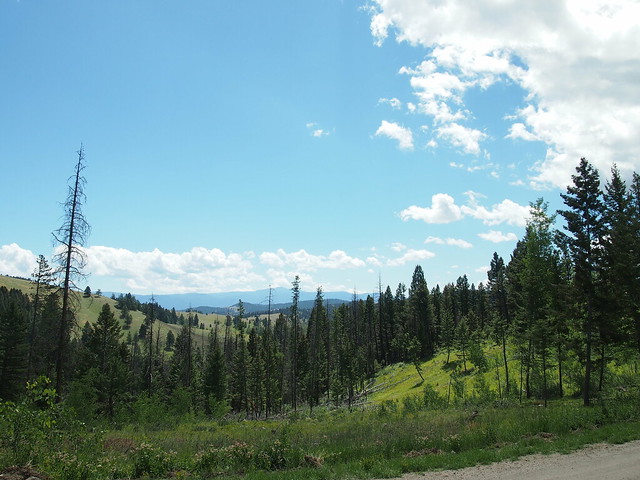 The descent was five miles long and was soon knocked out in twenty minutes, it was nice to have some cooling air passing over us. This was soon done with though and we were on to the next climb, which was thirteen miles long and took us over our highest point of the whole trip. 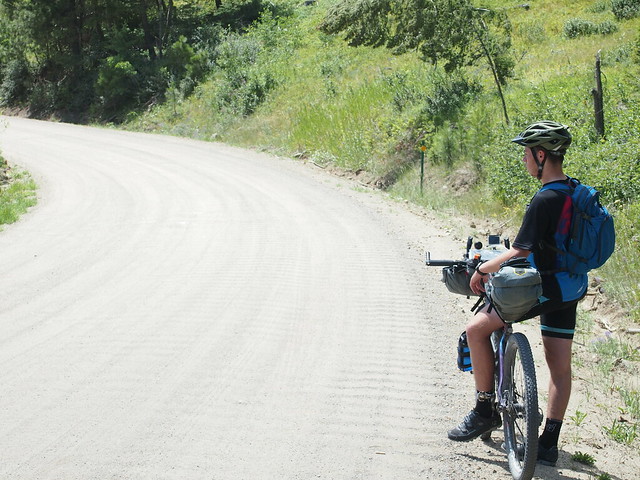 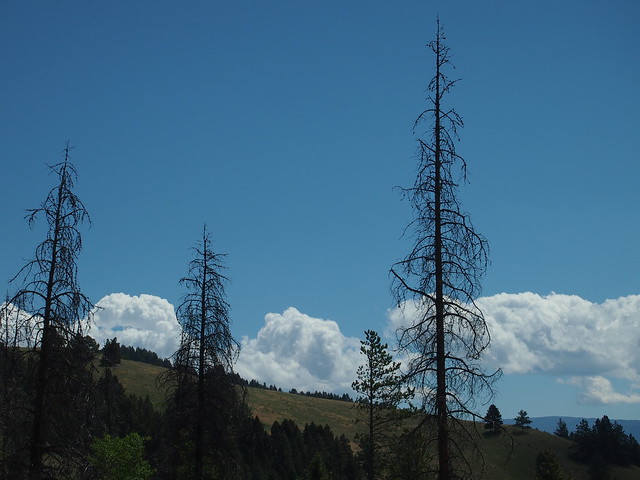 The climb wasn’t particularly steep, but there was false summit after false summit, we were desperate to see the top! A family in a pickup truck slowed down and asked us if we knew the way to Park Lake, a quick look at the map and we were able to give them directions, however it would cost them! I cheekily asked if Tom and I could hang on to the back of the pickup for as long as we could, they kindly said yes and we were off. The surface wasn’t particularly well graded though and because we were hanging on the outside the gravel either side was pretty deep. We managed half a mile then let them go with a wave. It didn’t help much, but it was a good way to raise the spirits a bit. 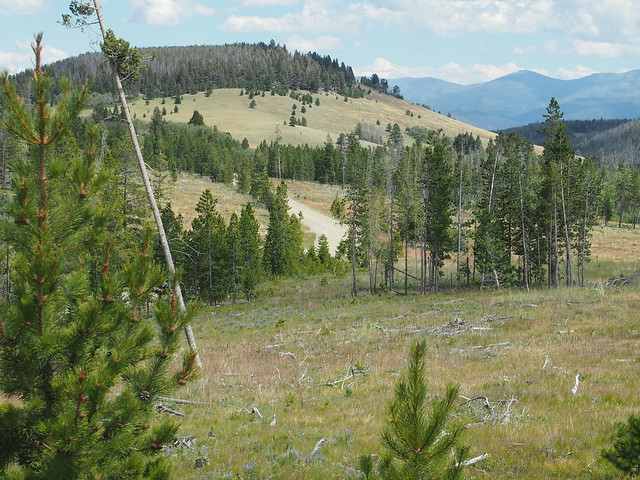 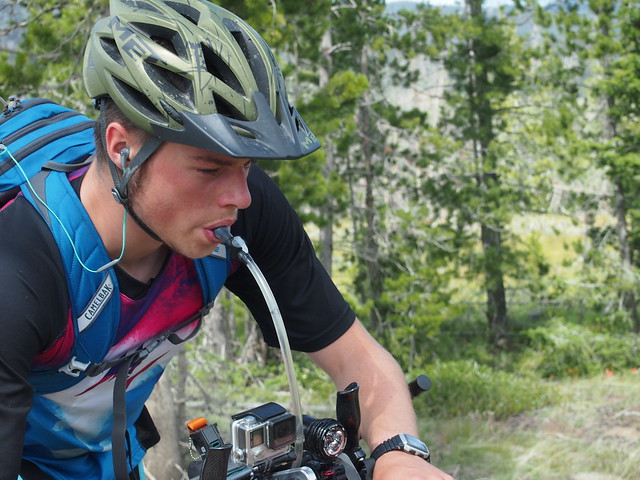 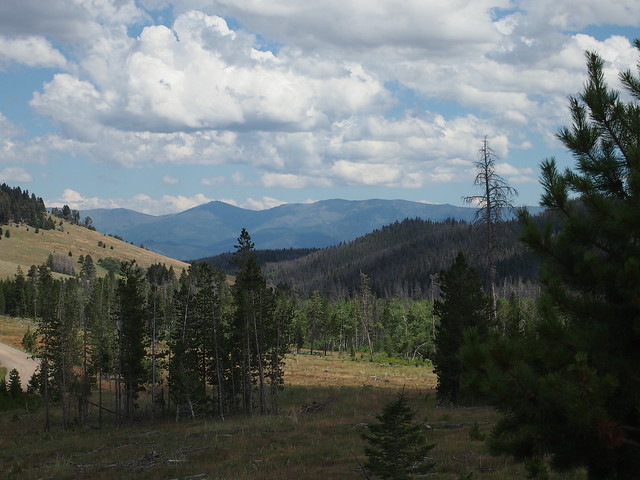 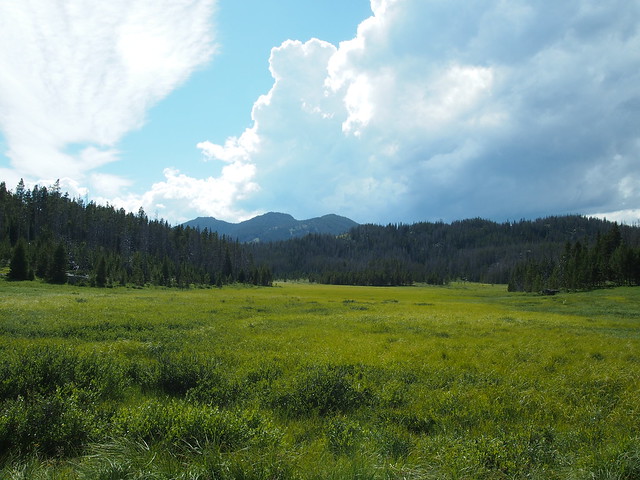 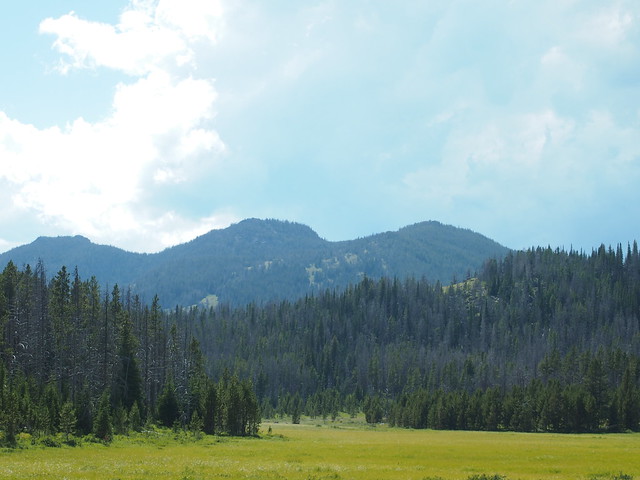 The road hit a plateau around Park Lake and corner after corner failed to show us the top. Eventually though we made it and started what we thought was a descent, no so though, after a bit we were climbing again. Then turning up the hill onto the seven mile long Lava Mountain Trail. 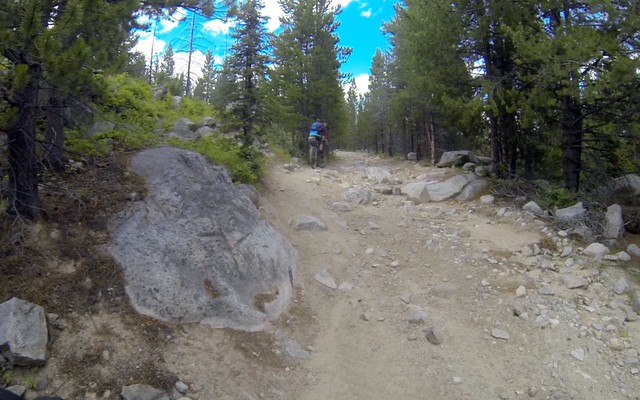 This was an ‘interesting’ bit of trail, not only were we the highest we had been, but thunderstorms were closing in, the rain had started and lots of lightning was striking all around. We couldn’t decide whether to don waterproofs or not and as the rain got a little heavier we eventually stopped and put them on. 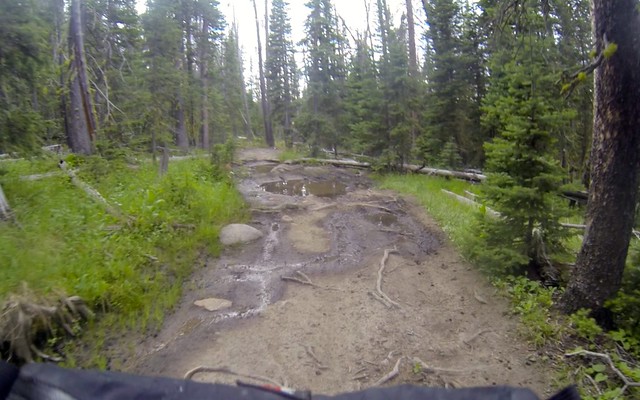 The uphill half of the trail was pretty hard work, head sized boulders and lots of exposed roots with deep puddles in between. I was pretty tired and walked a lot of this section and guess I was hungry too as I had my only real sense of humour failure of our trip. Tom watched on as I unleashed a string of expletives, especially ‘thanking’ those who designed the route in the process. When I had finished Tom raised an eyebrow, asked “have you finished?” with a smile on his face. 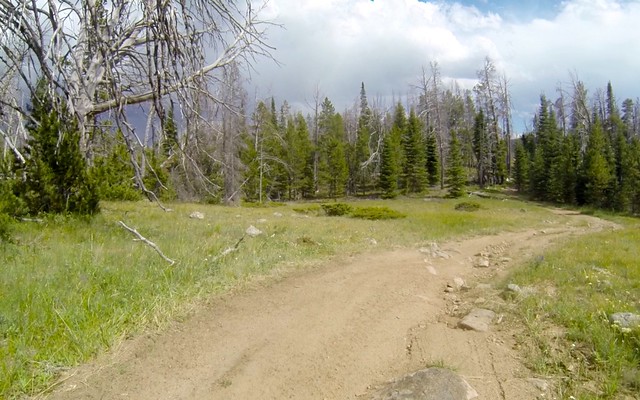 I felt much better after venting my frustration and we carried on, as had been the way many times I was shown shortly after just ho hardcore we aren’t, we bumped into two girls riding it northbound, not only did they have all the usual bikepacking gear, but they were carrying all the necessary gear to go climbing wherever they wanted on the route too.

Feeling suitably silly we carried on and started the descent, which was a lot of fun. The rain had stopped and jackets were removed again. At the next junction we bumped into a fellow southbounder who was setting his bivvy up in the trees, he was concerned about being struck by lightning and decided to stop, despite the fact it was only about five. We chatted for a while but we were being savaged by mosquitos, it was all downhill to Boulder so we decided to go for it. There were some open sections at first, which made us rather nervous with the lightning, but soon we were following the creek in a gorge and felt much safer.

It was about seven miles down to the road, the trail hugging the twists and turns of the gorge and we passed more abandoned mines on the way, we didn’t stop to take pictures this time though as we were thinking about food yet again. Onto the road and we followed the Cattle Drive Road along the bank of Boulder River to the town. With tired legs this seemed to take forever, but eventually we rolled into town, just in time to find everything was closed!

We rode to the other end of the town, up yet another hill, and fortunately the service station was open. As is often the way the choice on offer was less than stellar though. We bought some pasta and some parmesan cheese, along with a load of chocolate too. It was here we bumped into a crazy Welshman who was on his way from Prudhoe Bay in Alaska, to Dallas Texas. 4500 miles according to Google Maps. He asked us about camp sites and I told him about the page I’d found on Google that said you could camp on the green next to the town office. 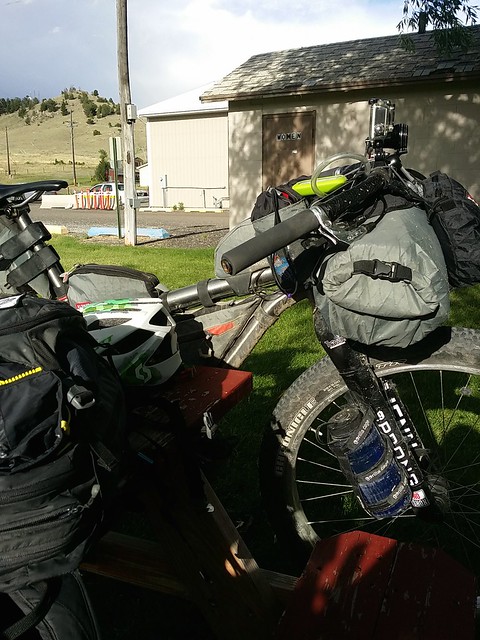 We set up our tents on the grass and there was some sort of commotion going on with kids running around and a police car cruising about. The Police car came over to us and the officer got out and walked over to talk to our new Welsh friend. We could hear he was asking questions but was looking pretty non plussed by the replies. I can only assume they don’t get many Welshmen in Boulder as it looked like he had no idea what was being said to him. Eventually he got in the car and left.

When we pitched the tent I had checked for sprinklers, but didn’t see any nozzles. Off to sleep we went, until….

Five thirty and we’re left repeating the process, the sprinklers on the other side of the park have come on. We move all the kit again back to where we were to start off. Surely it won’t come back on again?

Back to sleep again then lo and behold, a sprinkler just outside our tent, the last two that hadn’t come on. It was no worse than heavy rain though so we just left it where it was and Tom slept on.

I sat on the steps of the office to record my diary and the back door to the office popped open as one of the staff decided to empty the bins. I said “Oh you should have a sign that says you have sprinklers”.

She replied with “no, what we should have is a sign that says no camping”.

I explained that the green is listed as a camp site on Google and she said she would contact the web site owner to get it removed as it hadn’t been a camp site for over ten years! We had a nice chat and she went on her way not really bothered about the incident unfortunately.