This was the day of the great escape. We packed the bikes up early and shot down to McDonalds for breakfast. After looking at the previous day’s statistics we really we could get up to a pretty good speed down the rather steep Montana Street. So the plan was on, we’d try to top 40MPH on the way to breakfast. As we turned on to Montana Street a police car also turned on from the other side so we had no choice but to sit behind him at 20MPH all the way down, gutted! 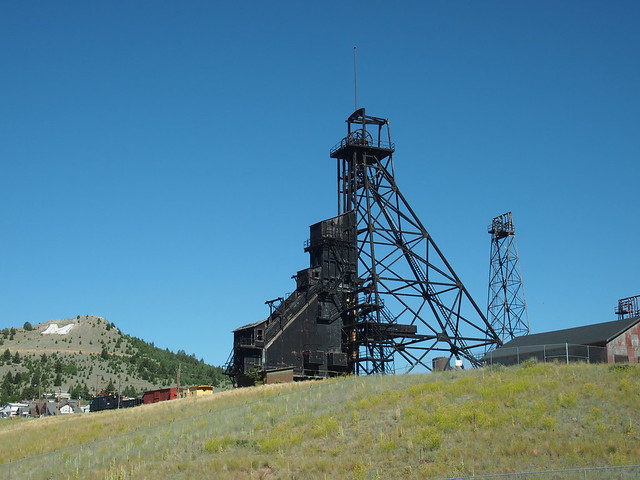 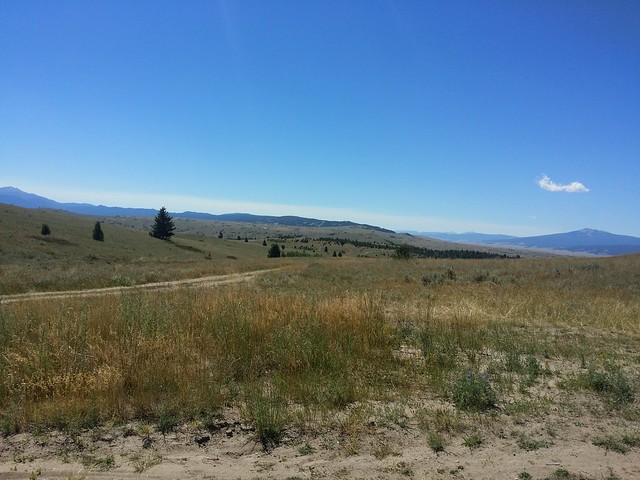 Breakfast consumed we met up with Jordan, jumped in his pickup and headed out to the Big Butte Open Space Recreation Area. We set up a load of beer cans, bottles full of coloured water and various targets and then proceeded to try and hit them. We had a Glock 9mm and Jordan’s hunting rifle (not sure of the calibre of that one). We donned noise cancelling headphones too. 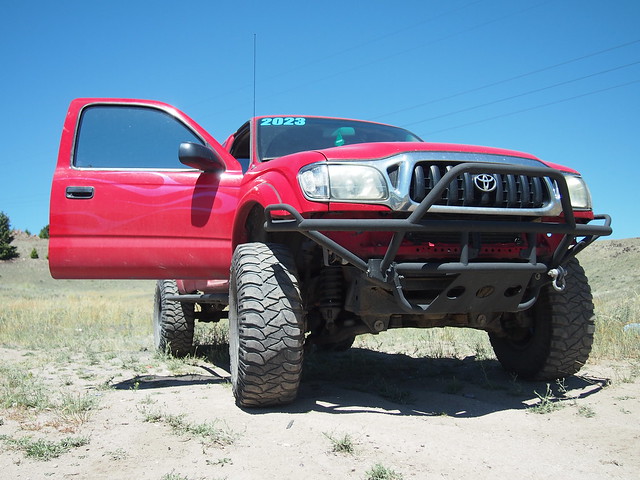 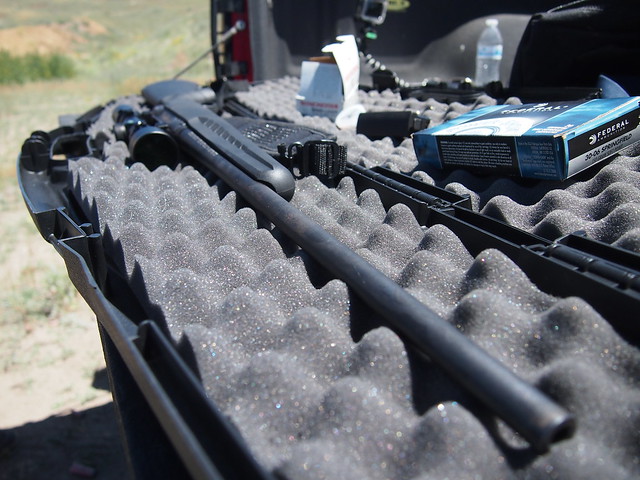 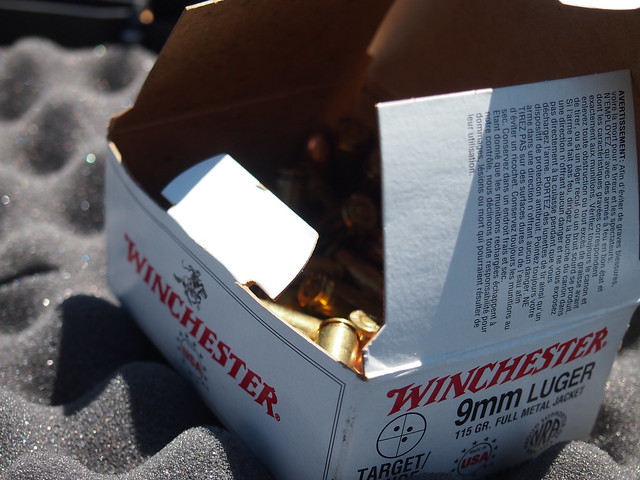 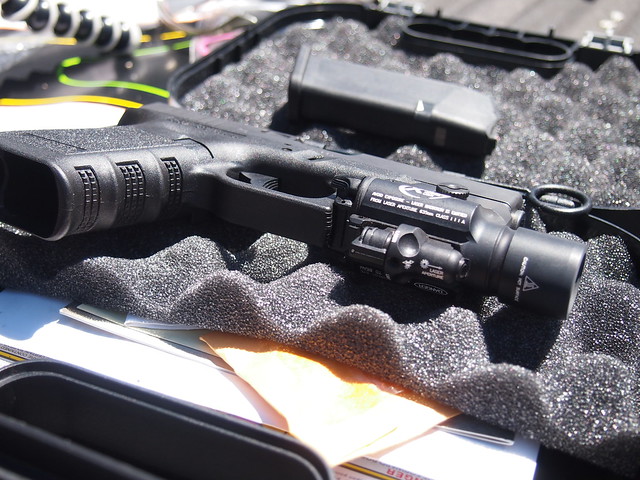 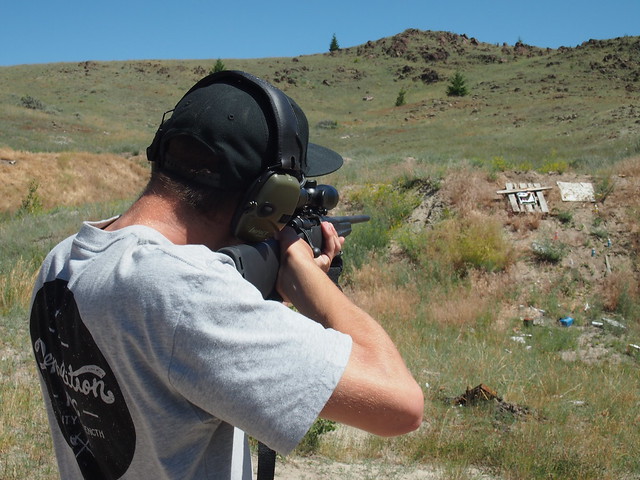 The rifle had somewhat more recoil than I expected and I managed to smack my shoulder and clang my teeth together on the first shot. It had a telescopic sight and it was amazing just how accurate you could be if you managed to control your breathing and relax. 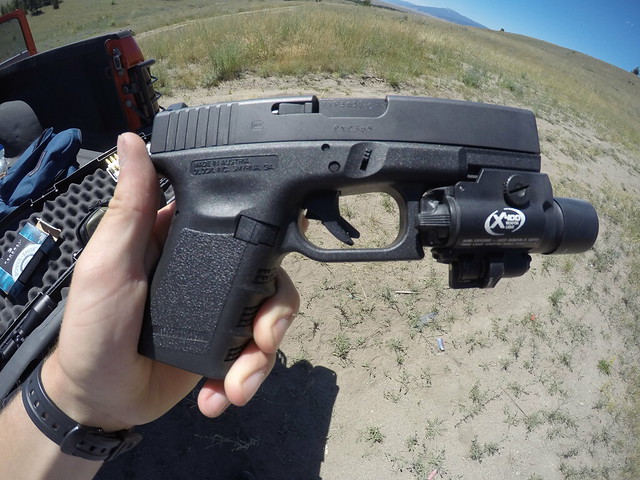 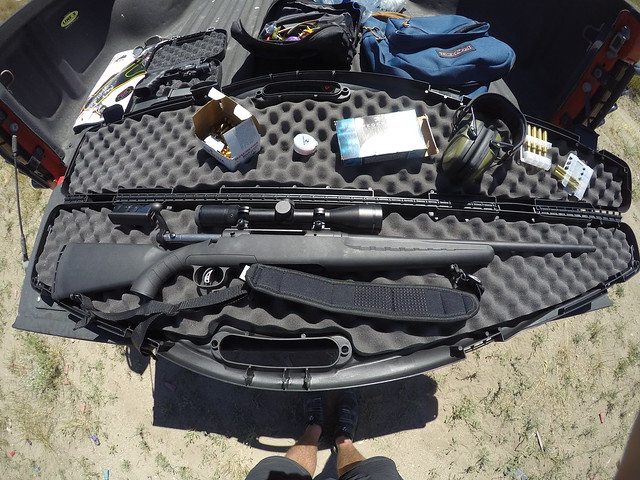 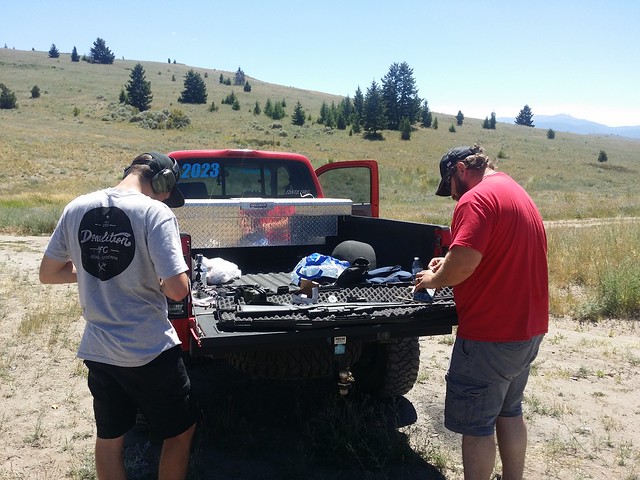 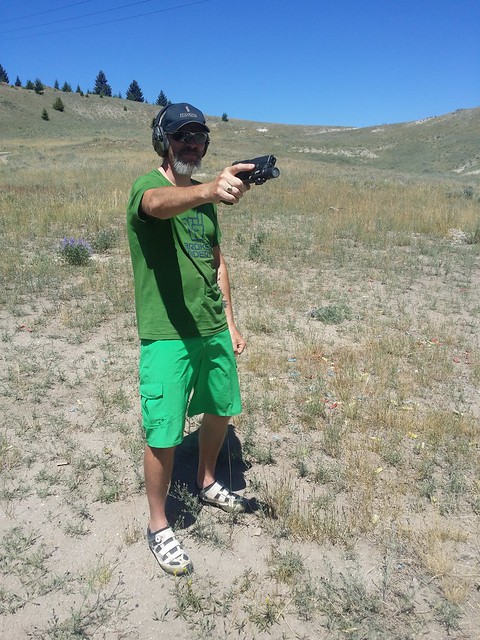 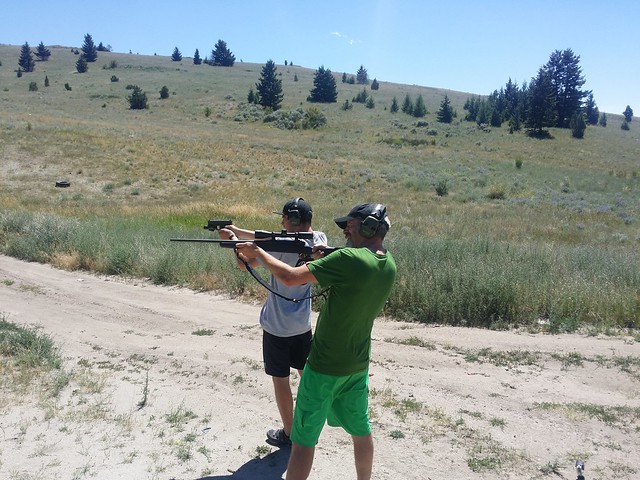 Ammunition exhausted we headed to the top of the hill that overlooks Butte. It has a large M illuminated on it at night, for Montana Tech which is the university Jordan attends where he is studying mining. The view across Butte is incredible and we looked South to follow the direction of the divide route. It was bittersweet, we’d had an amazing trip, but the planets just weren’t aligned to carry on any further. 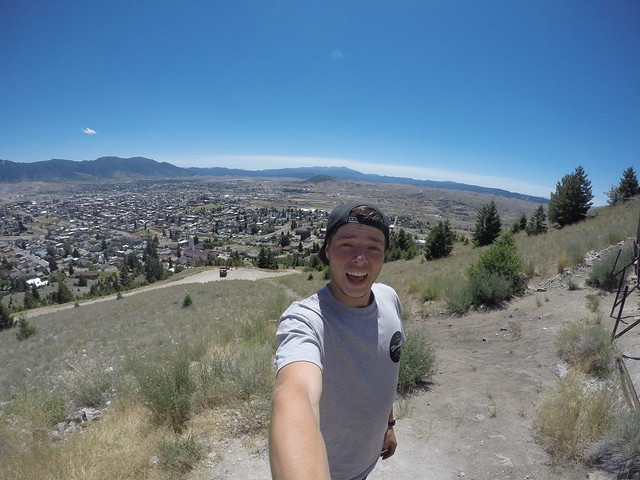 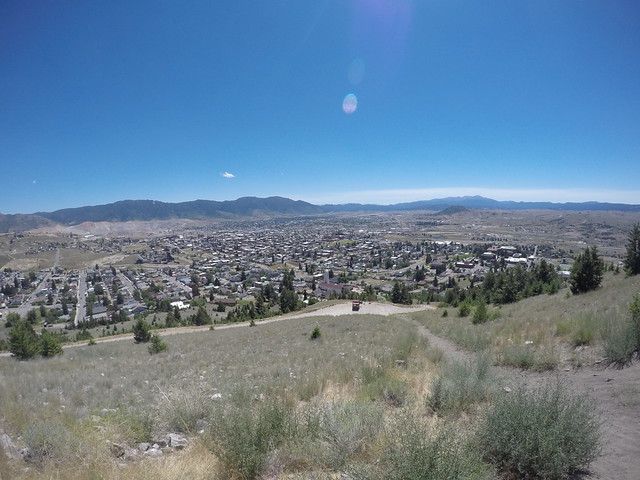 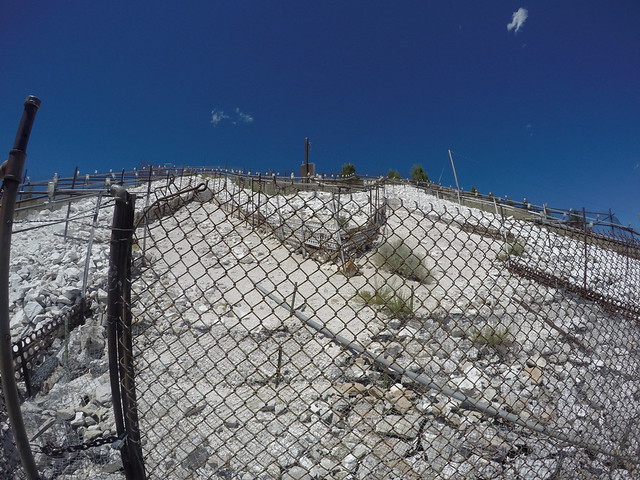 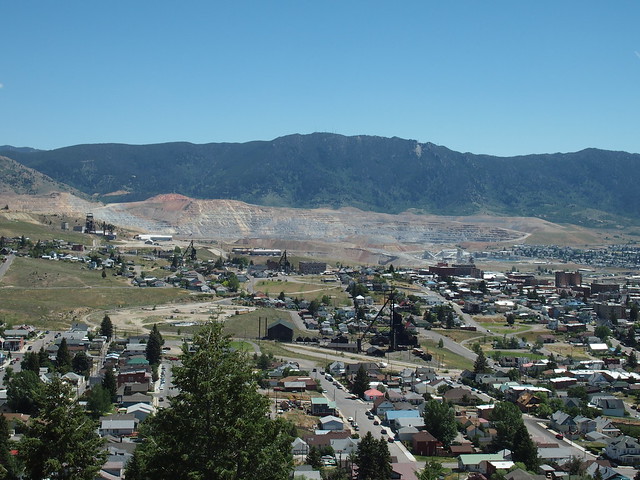 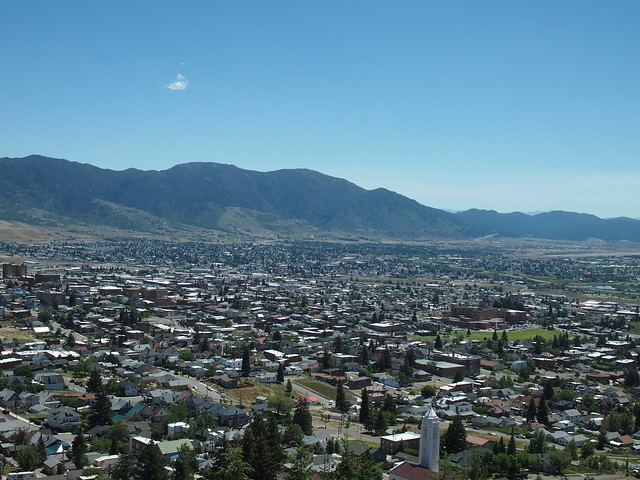 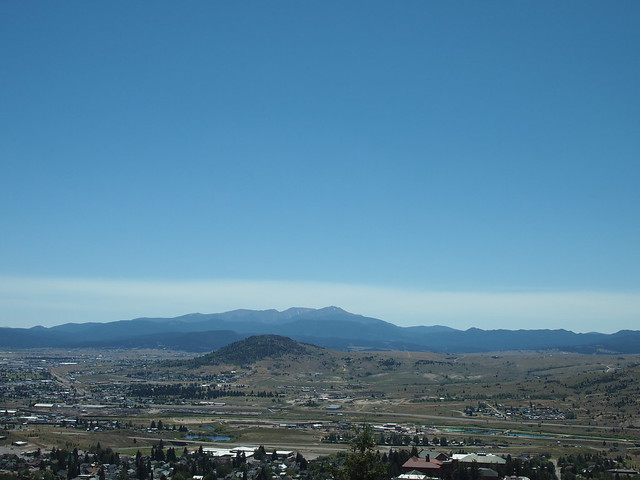 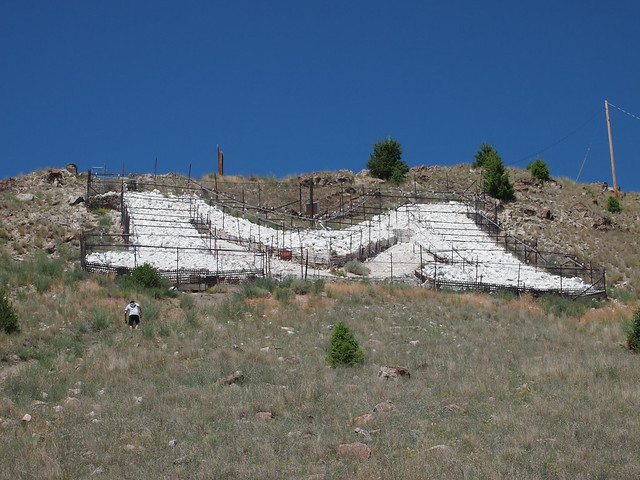 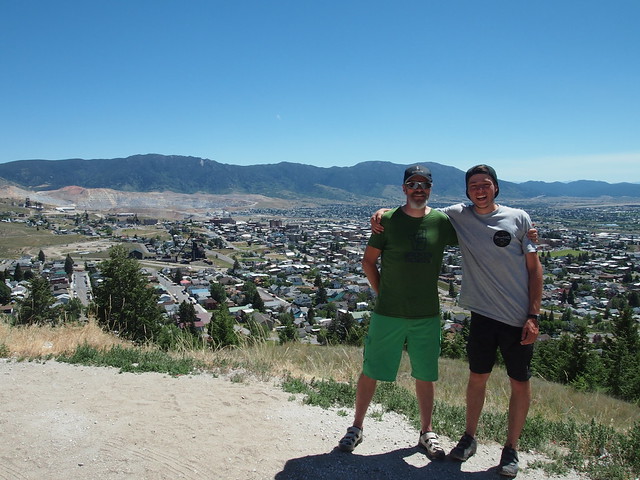 We rode back into Butte to pick up the car, as luck would have it they didn’t have the one we ordered and we got an upgrade to the next size up. It was still a saloon though and it meant the bikes would have to be totally stripped to squeeze them in. Fortunately the back seat split and folded too so we just about squeezed them in.

All that remained was to pick up the bike boxes from the Outdoorsman. Tom had a standard 29er box and I had a plus bike box. We got them out into the car park and then scratched our heads as to how the hell they would fit in. We ended up flattening and folding them and eventually we got them in and got the doors and boot lid shut too.

We bought supplies for the trip then hit the road, the target for the day was Island Park Idaho, where I’d found a campground. There was no way of booking so we crossed our fingers and hit the road. The roads were empty and we soon turned off the interstate and onto the highway. On the top of the mountains to the right hand side of the road there were some very large forest fires visible. It was hard to tell from the map whether that was over near where the divide route goes, but there were helicopters dropping water too so it must have been pretty serious.

We pulled in at the first campground we could find, which was Henry’s Lake Campground. As luck would have it we found one remaining spot for a tent and set about putting it up. Wow there are some pretty vicious mosquitos in Idaho, we got the tent up as soon as we could and dived inside quickly. 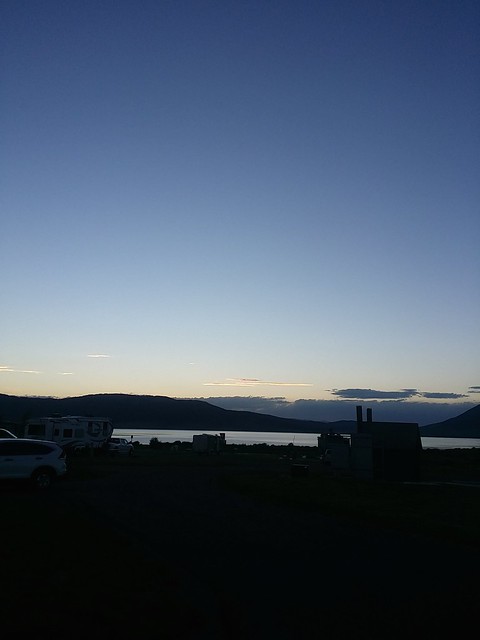 The view was incredible, but the only safe way to enjoy it was inside the car if you didn’t want your blood sucked out!