In the middle of the night there had been a very short mini hurricane and downpour which had woken us both up, fortunately though the tent was still waterproof and in one piece. I woke up early and decided that the best way to get us to our destination for the day, Yellowstone, was to yank Tom out of bed and stick him in the car in his sleeping bag. This proved to be a good plan and I had pretty quickly packed everything up and we were on our way by eight, with only a minimal amount of mozzie bites too. 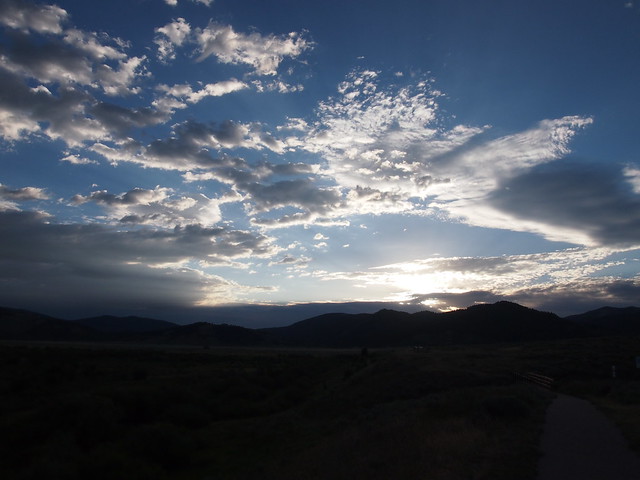 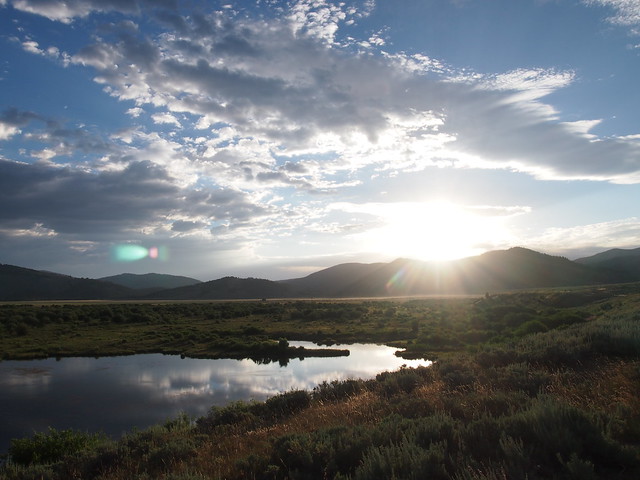 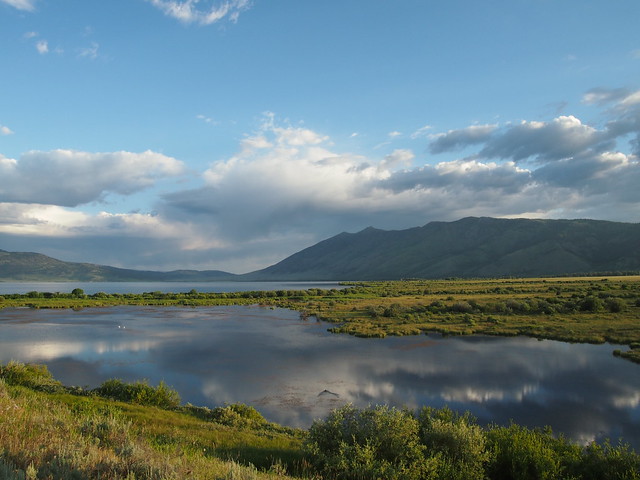 It was alright, but just a little distasteful after the likes of Ovando and Helena. McDonalds looked like it had been put there in the seventies, but it has superfast WiFi and USB sockets in the walls to charge your kit, nice!

Yellowstone has almost an orbital road network, and we came in from the north. I saved a few dollars by getting a Yellowstone and Grand Teton pass. We entered from the west and stopped at the Lower Geyser Basin and the Midway Geyser Basin for the stunning Grand Prismatic Spring. It was hard to adjust to being on the tourist merry go round with large queues of people all following each other on the boardwalks, but it was so worth it. The Grand Prismatic Spring was absolutely stunning. All the areas with geysers had boardwalks keeping you off the volcanic crust below, water temperatures were very high and if you were to fall off and puncture though you’d be in for a very unpleasant experience. 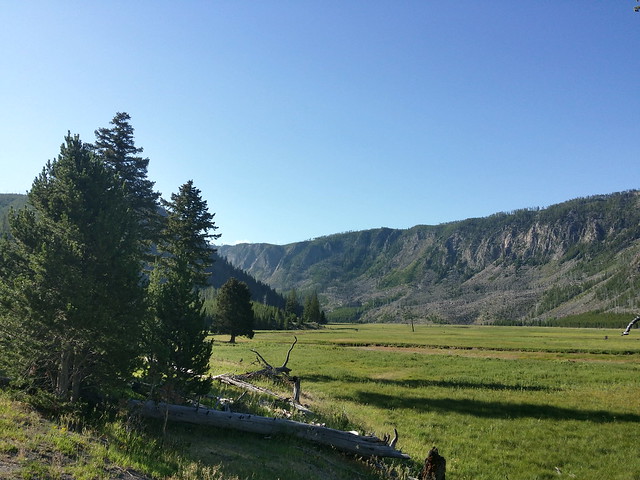 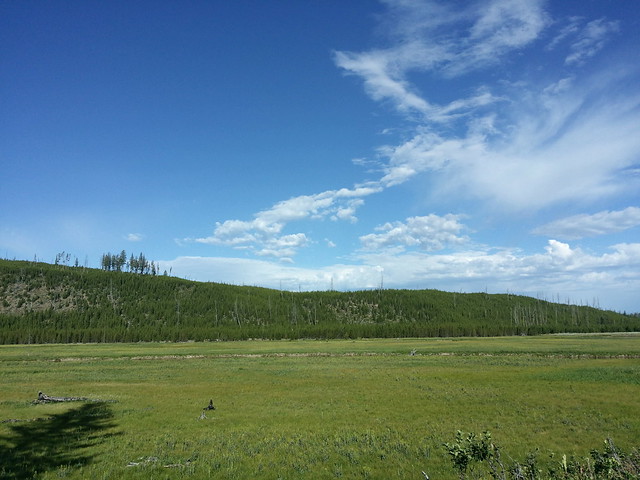 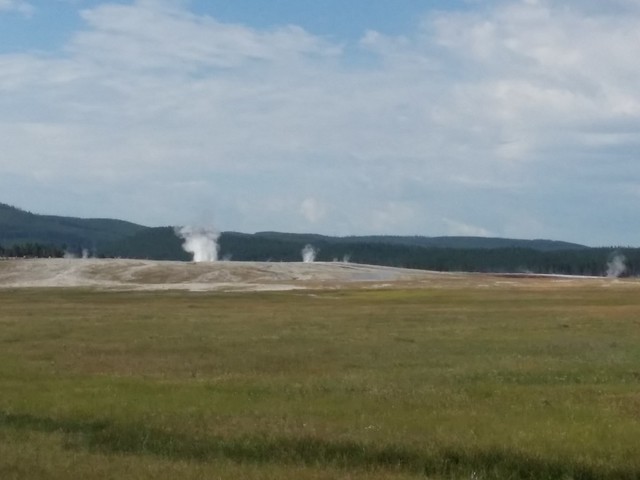 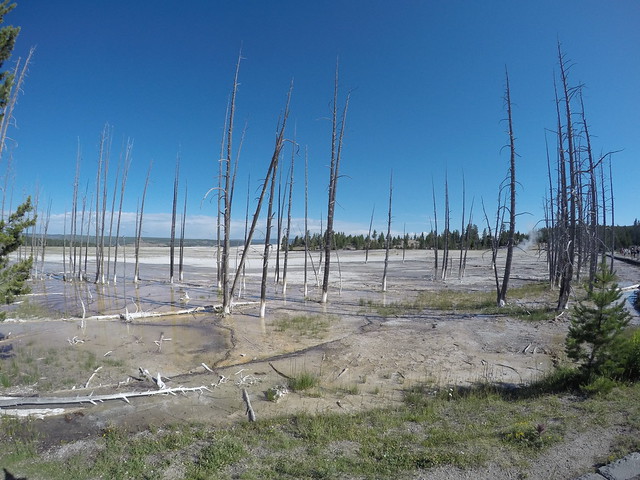 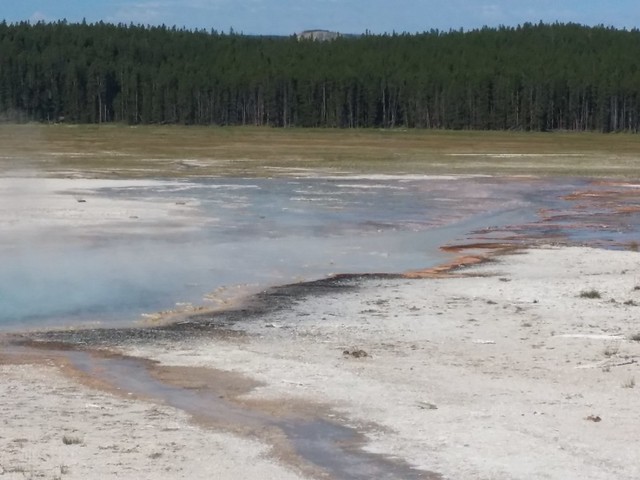 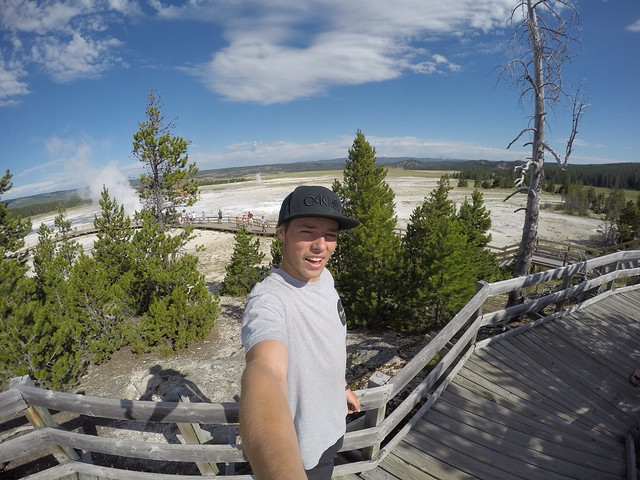 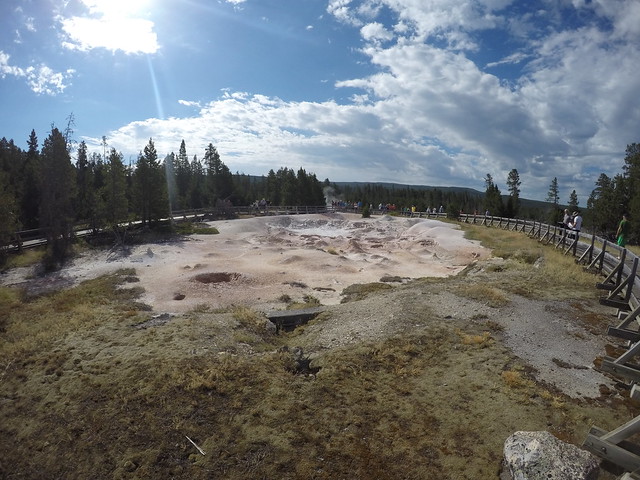 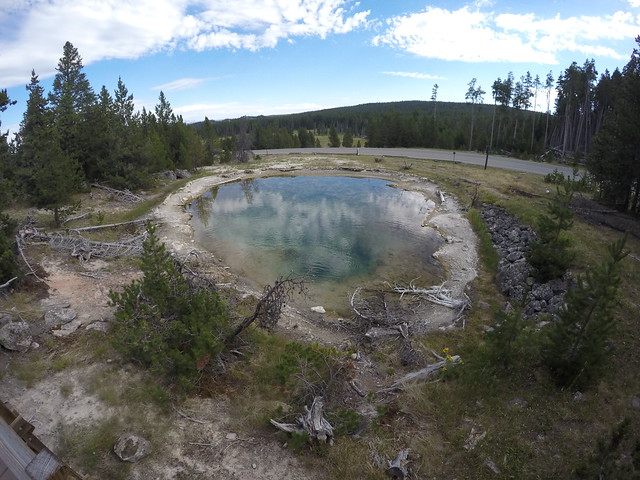 Then it was off to the Upper Geyser Basin for Old Faithful. Again it was amazing to walk round and see the sights, but I had just about had enough of all the people by then and was keen to get going. Queues of Koreans dressed as gangster rappers, Japanese fulfilling the stereotypes wearing face masks, waterproof jackets despite the fact it was 30ºC plus with many cameras and video cameras. It was all too much after the solitude of the divide. We waited for an Old Faithful eruption and then got out quickly. 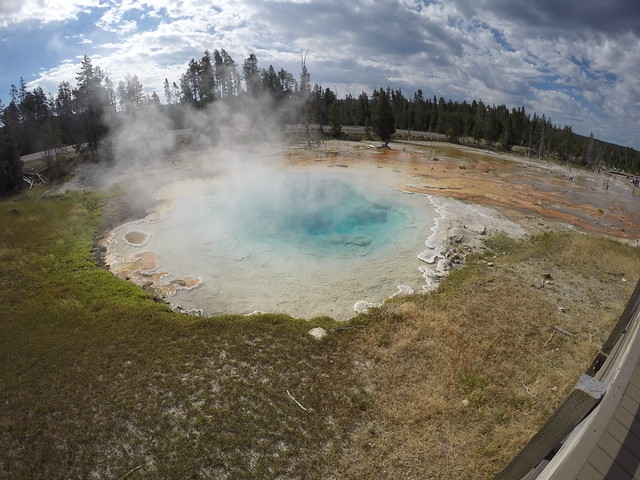 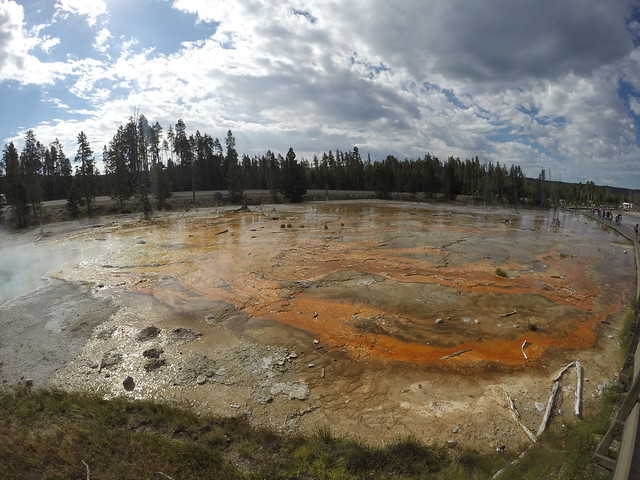 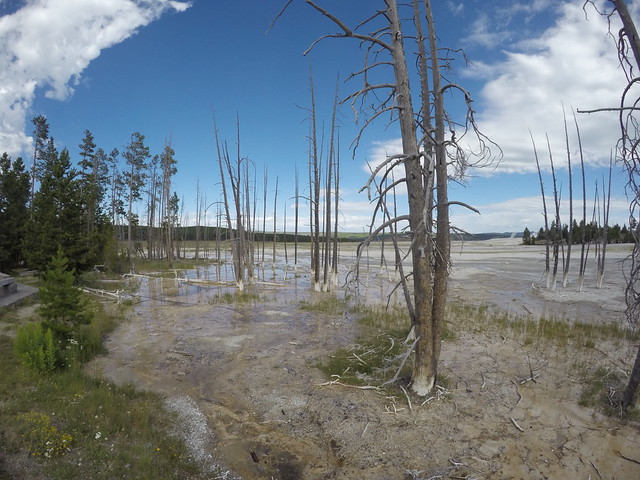 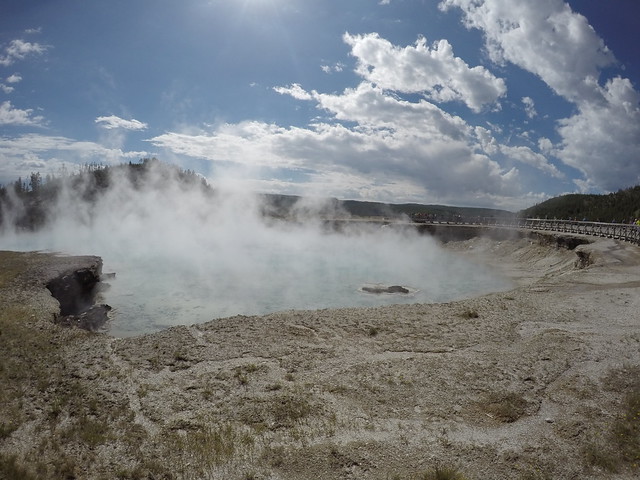 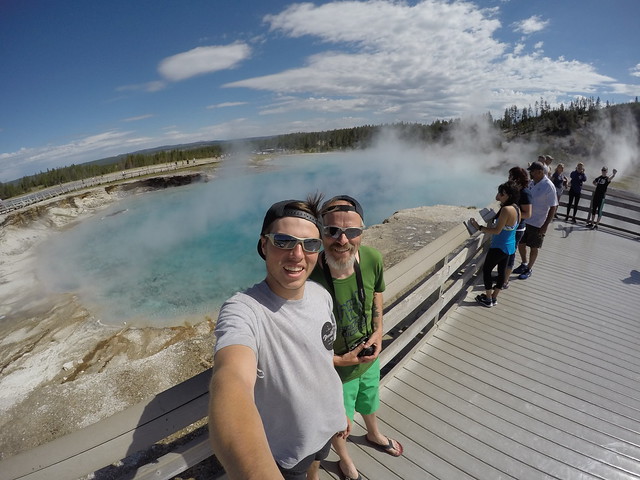 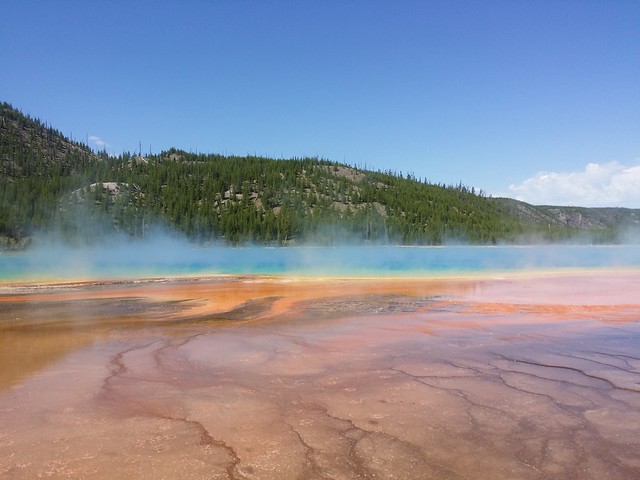 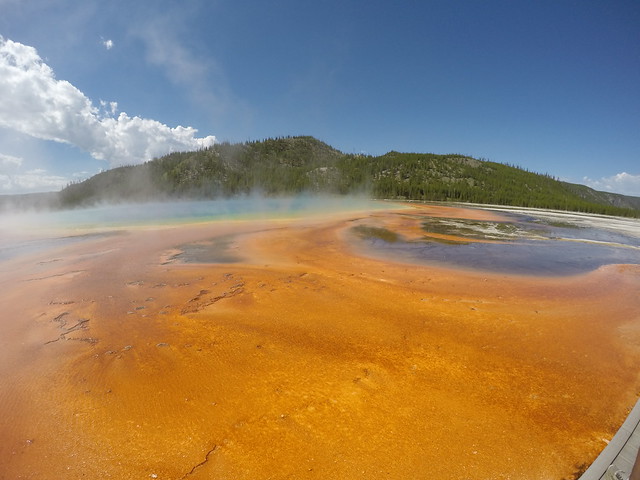 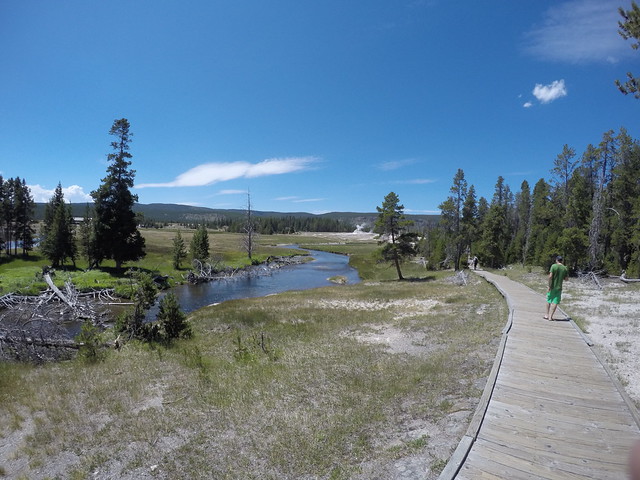 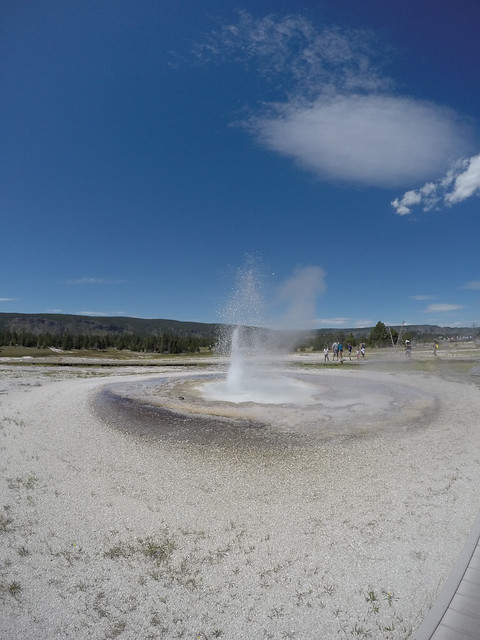 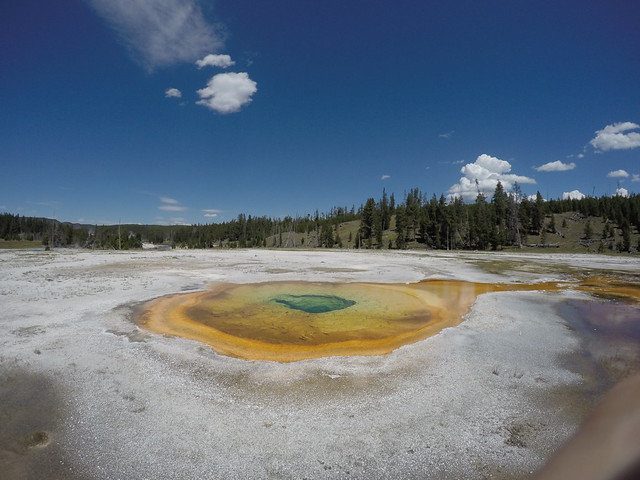 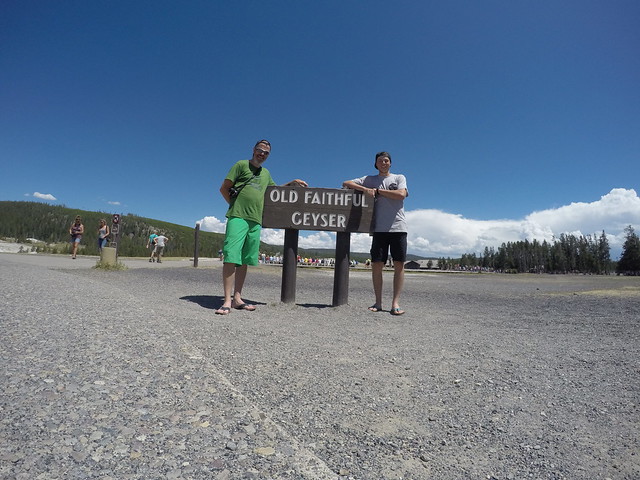 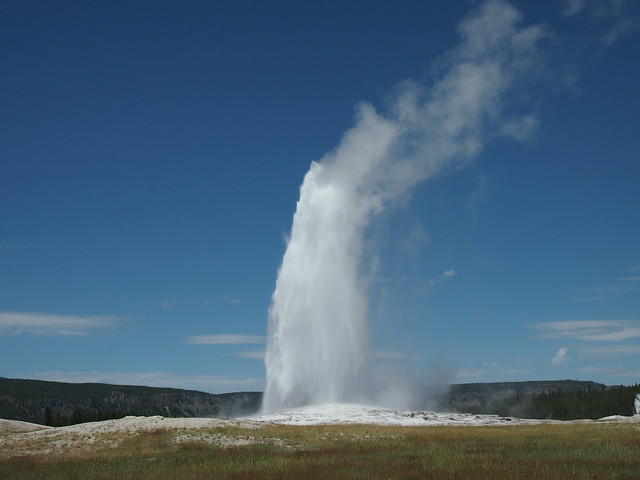 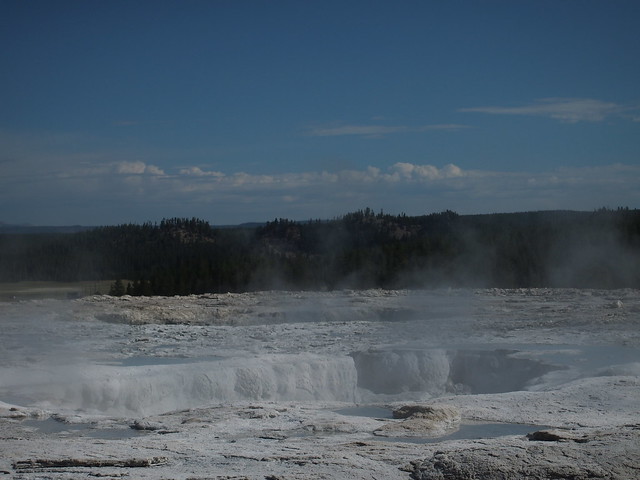 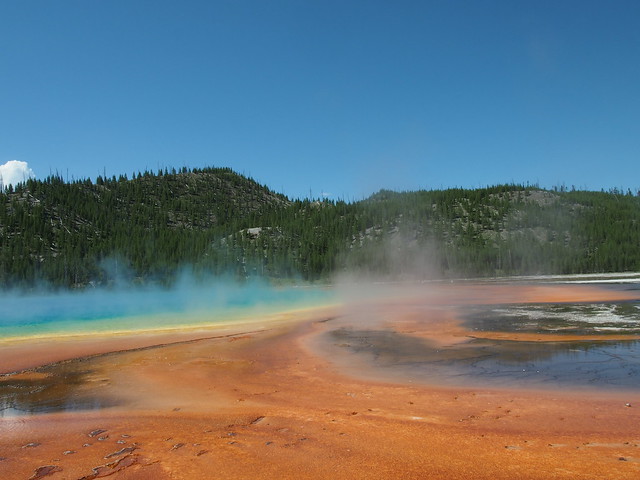 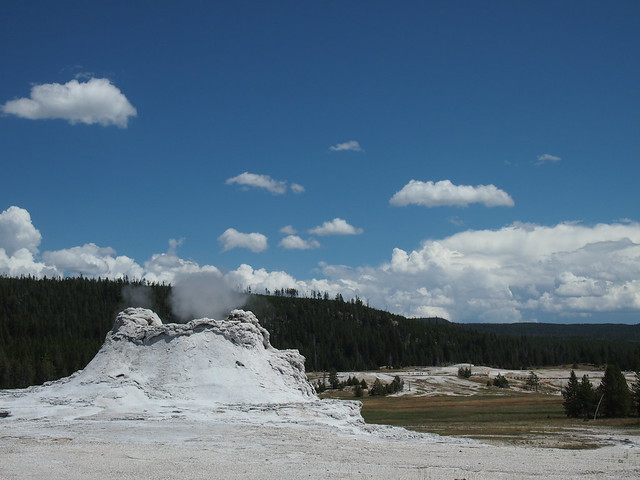 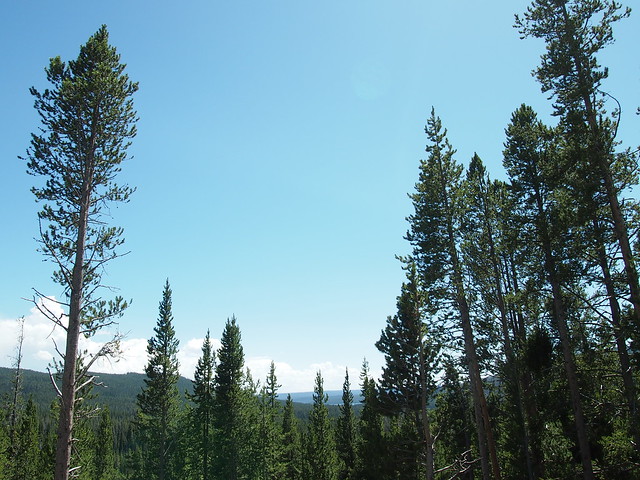 Back on the road we left Yellowstone and I’d decided to try to get as far as we could that day, however I was pretty tired and about a mile outside the park I spotted a sign for Headwaters Lodge & Cabins at Flagg Ranch, I pulled in speculatively and they actually had a couple of camping spots left so we decided to call it quits for the night.

We checked out the lodge for food, but it was incredibly expensive so we decided to use the advertised WiFi which turned out to be provided by satellite. Wow hi tech, or so you would think, the reality was the satellite provided about 1kb every time it went past! I had no choice but to eat and entire bag of Reece’s Pieces and return to the tent to cook.

The evening was spent slumped in the comfy chairs in the centre and then it was early to bed.