We’d decided that we’d travel down the night before so after work Daryl and I hopped on the train at five fifteen and then settled in for a loooong journey. Eventually after a change we rolled into Weston-Super-Mare at nine thirty and after Dougal turned up we headed to the start of the route at the pier and headed up onto Anchor Head and found somewhere off the path to set up camp for the night. 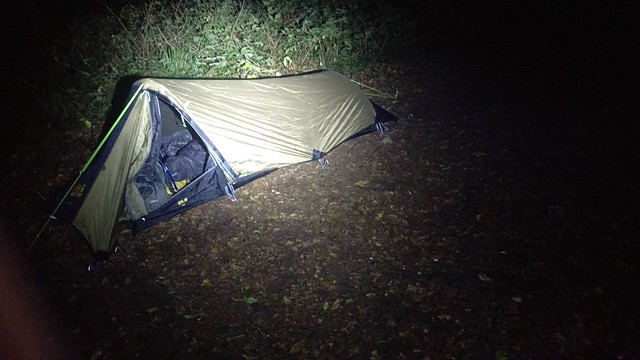 Come the morning and we cooked up our breakfast and then headed out onto the trail, a quick descent back in to Weston-Super-Mare and Dougal’s “truck driver’s nose” sniffed out an excellent transport cafe where we were able to get a second breakfast and take care of business.

We headed out of town and we were quickly off road, relishing the challenge to come, and we were soon heading up the first of a few lung busting climbs. Over the M5 and the next section on the top of the Mendip ridge was amazing, the views were awesome. 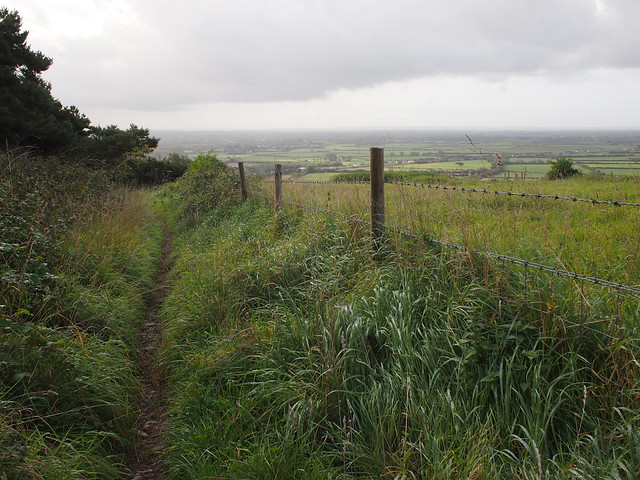 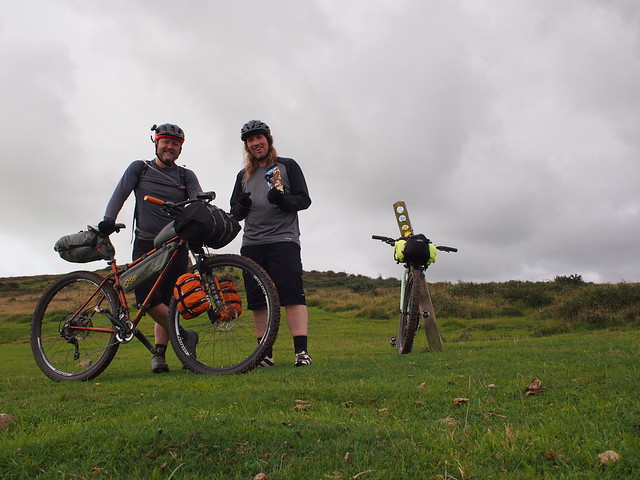 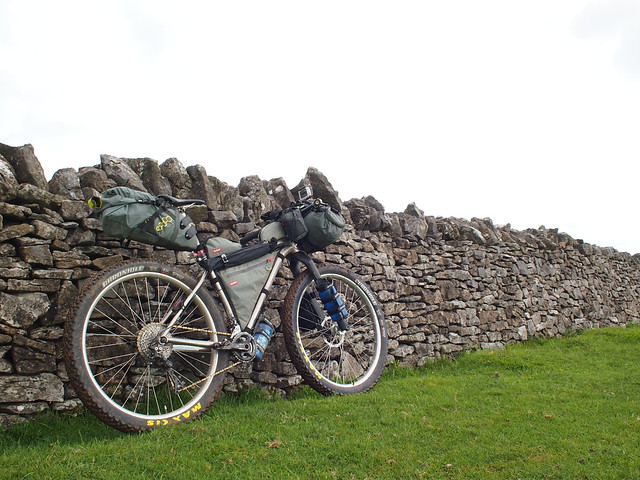 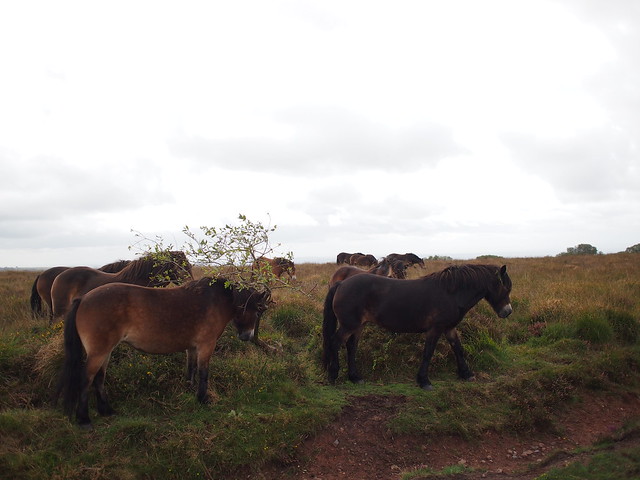 It was lunchtime and we got to Wells, this was awesome as it’s the setting to one of my favourite films, Hot Fuzz, it was great to see some of the locations in the film and the cafe we stopped at was in the town square that was in the mad finale of the film, it was great! 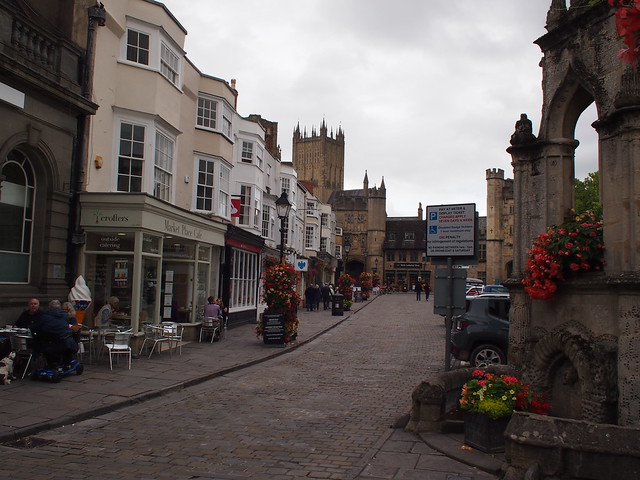 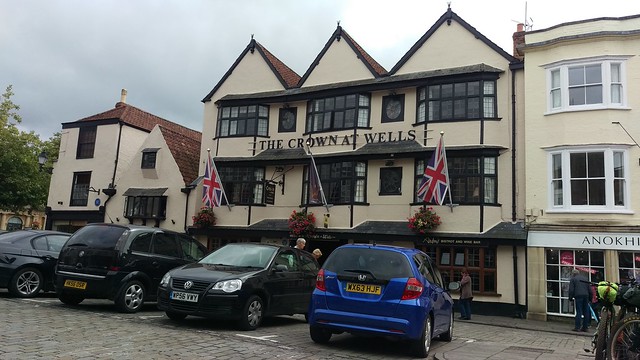 Lunch done and it was back onto the trail, a mixture of back roads and trails and we were starting to run out of gas. We wanted to get a good feed before we stopped for the night and wanted to find somewhere to stop that was between two towns so that we could supply for the night and have somewhere for a second breakfast and use of “the facilities” in the morning. We refilled the water and did a quick Google search before going off to find Pizza Hut in Frome.

We had a major feed, but as we were about to leave it started chucking it down with rain. The hunt was on to find a bivvy spot and as we were heading off we checked out pretty much every spot that looked like it would be a good one. We found a nice block of woodland with a single path leading into it, I sneaked in to have a look and would you believe it, someone was in there already!!

We carried on in the pouring rain and when a cosy looking country pub, the Horse & Groom, appeared I went in and put on my best sad face. “If we buy some beers can we camp in your garden please?”, to my astonishment the barmaid said yes, so we trooped in and began rehydrating in earnest. 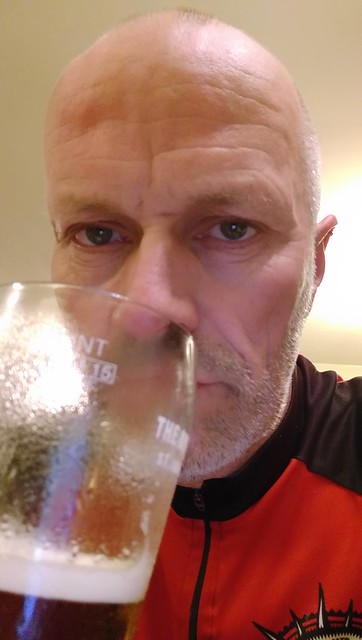 The following morning we had the benefit of packing up under cover and made breakfast in the handy covered smoking area. 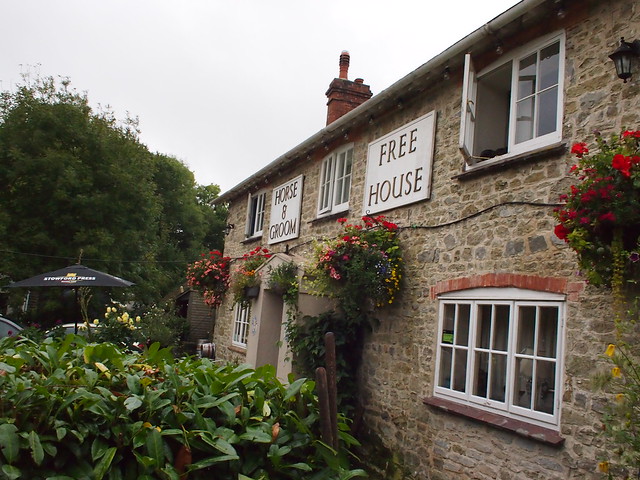 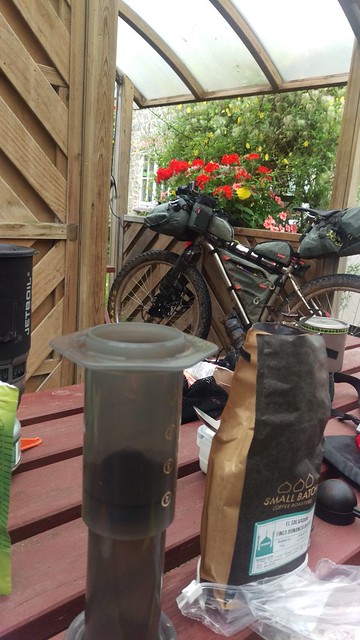 It was still raining reasonably heavily and we got to Warminster and headed straight into Costa. The next section was awesome, many of the trails were used in the long departed Salisbury Plain Challenge, which we used to ride back in the nineties. Back then it was a real struggle to complete the 50KM route and I can remember how hard I used to find some of the climbs, so it was rather pleasant to find them so much easier nearer my fiftieth than I did nearer my thirtieth! We had a screaming tail wind and despite a short but very heavy downpour we breezed (literally) our way across the plain and were soon descending to Pewsey. 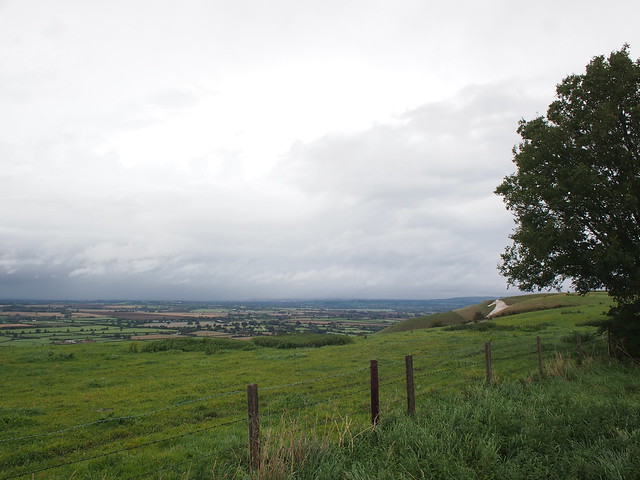 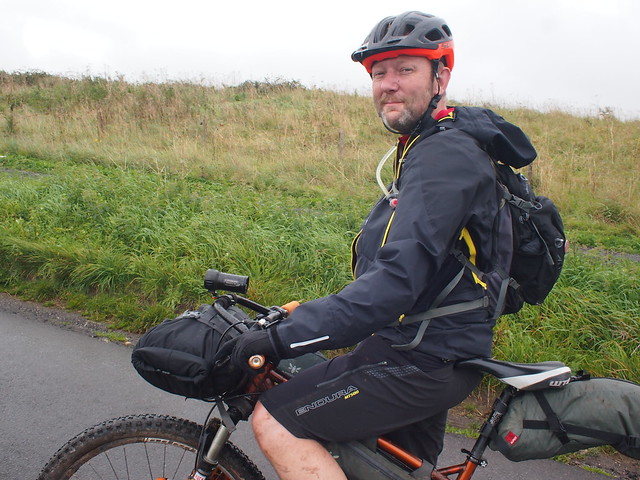 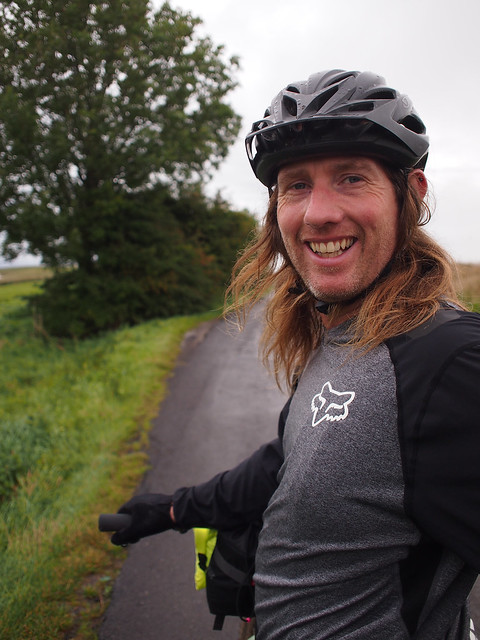 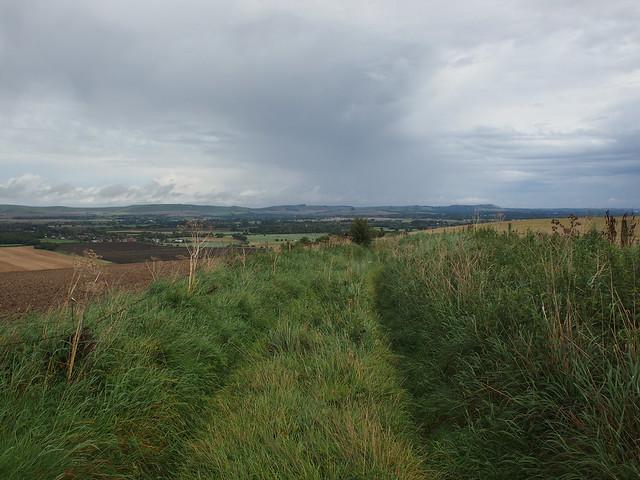 Descending off the plain we got to Pewsey and had more food in a rather excellent cafe, dodging another shower in the process. It was here over a cup of tea we decided that we were going to ditch the original plan and join NCN4 and follow the Kennett & Avon Canal.

Unlike my recent trip on NCN2 this route proved to be much better signposted and we weaved our way through the country lanes and along sections of tow path. The weather was much better and went we eventually got to civilisation, well Newbury anyway, we decided to sit in the evening sun and have a pint. 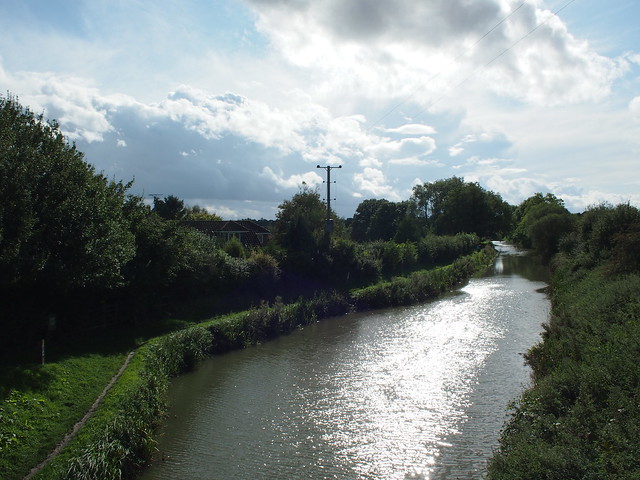 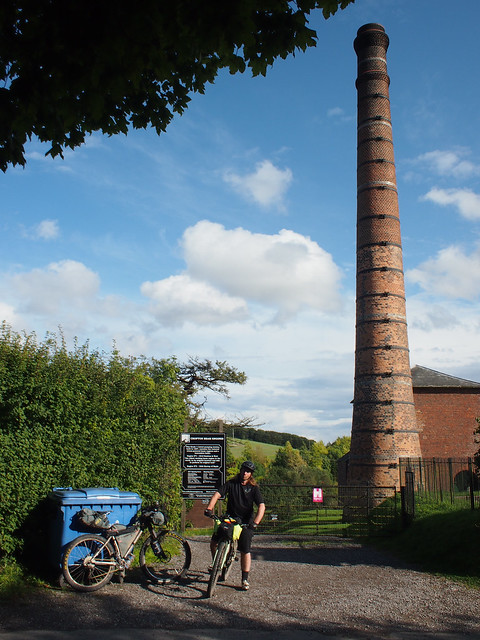 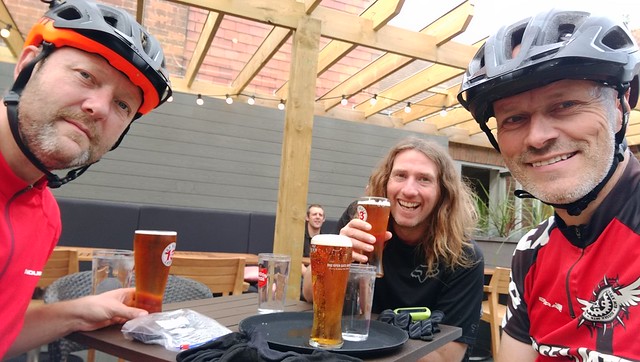 It had been a long day and we restocked at the supermarket and then headed off down the tow path to a spot that Dougal reckoned would be a good bivvy spot. 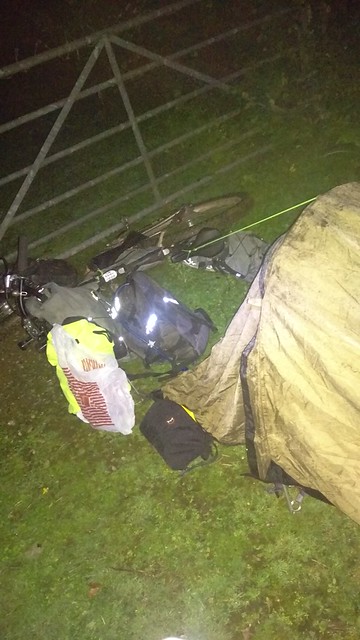 We’d done nearly seventy miles and were keen to stop, set up and get cooking quick. It was a good spot, but the surface meant I couldn’t get my tent pegs in so I had to improvise and use my bike to hold up the tent! It was a gourmet meal, space in my bag was limited and I’d shopped based on the important criteria of things had to be flat! So a delicious meal was had, wraps, plastic cheese slices and hot dogs! Damn it tasted good. 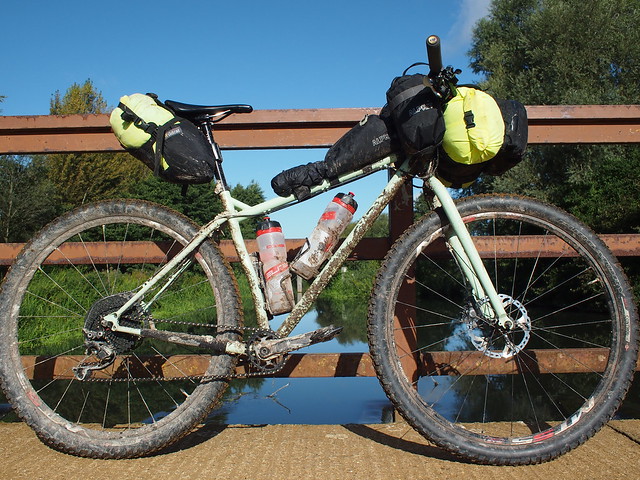 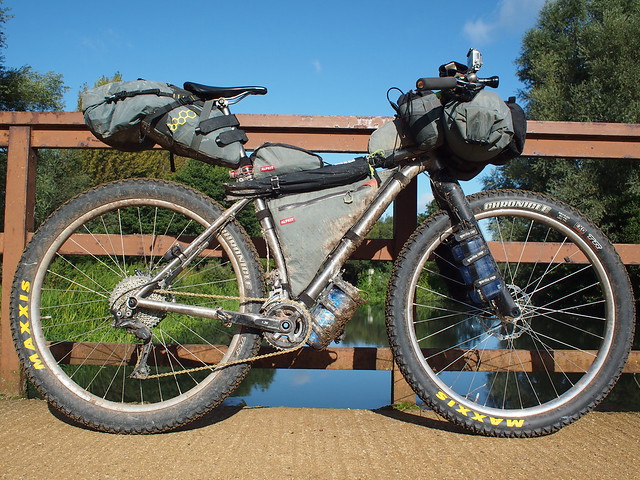 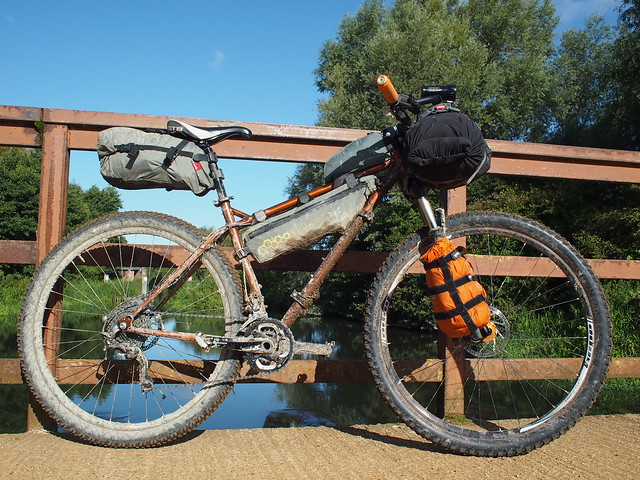 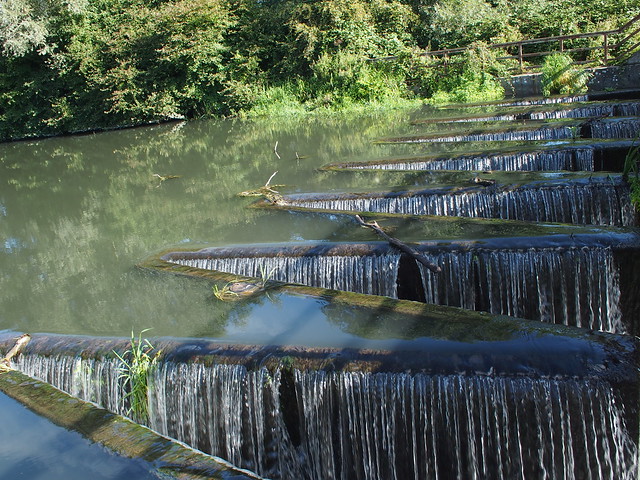 Despite being sandwiched between a canal and a main railway line I got a pretty good night’s sleep and when I stuck my head out the tent to find blue skies we were set for a great day’s riding. We followed the canal in the early morning sun and headed for Reading. Just as we were getting into Reading we spotted a pumptrack in a park, it was too good to turn up. I hung up my BMX race wheels two years ago but it was awesome to fly round the track, even if it was on a 29+ fully loaded with luggage! 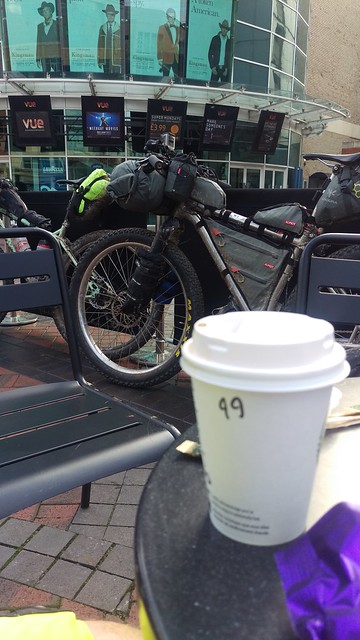 We joined the Thames at last and rode alongside for a while before cutting out a large meander and heading off across country to Maidenhead. We got more food at the supermarket, dodged a heavy rain shower and then we had a choice, we could either follow the north or the south bank of the Thames. We opted for the north. This proved to be a mistake as there was some sort of charity walk on and we ended up having to wind our way through several hundred people, I almost wore out my bell finger! As a result of this we got to the ferry at Shepperton only to find the last one had run ten minutes earlier. 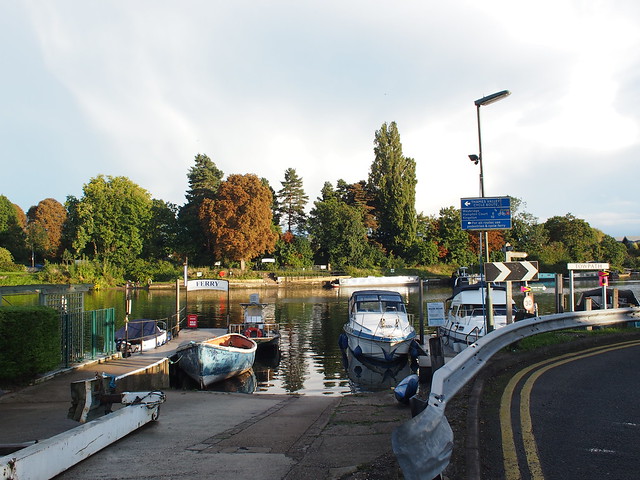 A reroute was then required, adding a few miles on to our route. We were knackered, it was getting dark and we were still too much in suburbia to call it a day. It was getting dark and we just had to get on with it. Eventually we got back to the countryside and crossed Wisley Common, it was a nice spot but no bivvy was possible as there were cattle loose.

Over the M25 and the trails were a little more familiar, we crossed the A3 and at last a suitable spot was found, we tucked ourselves out the way and set up for the night. 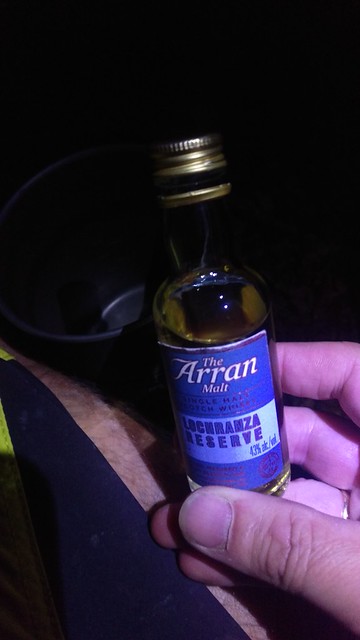 The last morning dawned, I’d had a good sleep but Dougal told of people coming up the nearby track in a car and walking around with torches in the middle of the night, we weren’t seen and a lesson was learned, do not bivvy too near civilisation!

It was a chilly morning and I knew that we had some great trails to come on our last day. As we headed south we were looking forward to the second breakfast. I’d heard about the Dabbling Duck in Shere, but had never visited. We sat in the garden in the sun and a flat white and bacon sandwich was soon dispatched.

We were definitely in the minority though, there must have been twenty five roadies, all different groups, in there. We were the only MTB’ers! 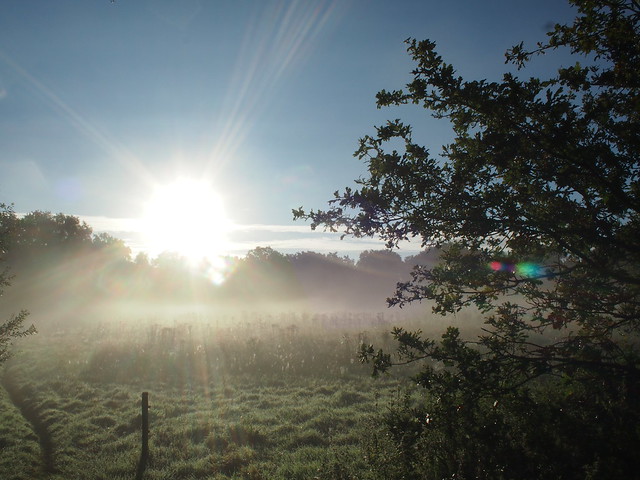 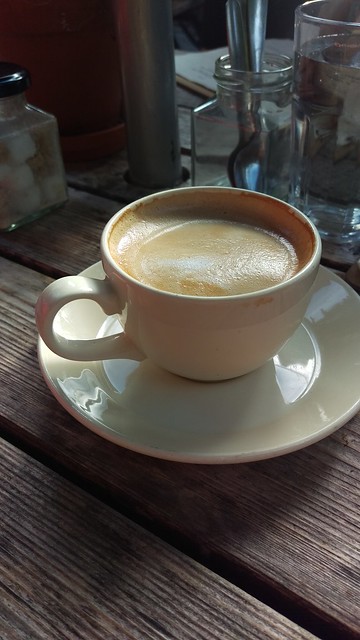 The further south we got the windier the weather became and the last twenty miles were really tough, we crawled along into the wind and eventually collapsed onto a bench to refuel. 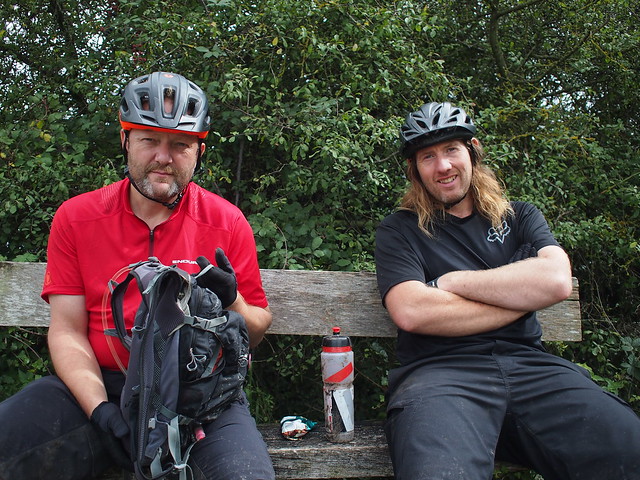 So there you have it, four great days bikepacking with great friends, we made a few changes to our intended route and it turned into a bit of an adventure. The only trouble is I can’t wait for the next one now…….