I met John on the Welsh Ride Thing and we were chatting on messenger thinking about getting out for a bivvy elsewhere. John decided that he wanted to come out of his comfort zone and head as far South as possible so we decided we’d hit the Isle of Wight and try to visit all four pointy bits.

Once we put a few comments on the Bike and Bivvy Facebook group a few others wanted to join in too, so it ended up being a Facebook / Bearbones meet up and we christened it the “Southern Winter Bivvy” 😉

John headed down early afternoon and I hopped on the train, as usual Southern Rail did their best to thwart any kind of train travel and with a few cancelled trains I ended up stopping a station early and having to navigate across Portsmouth by divine inspiration. Fortunately there is a big pointy thing right next to the ferry terminal so it wasn’t too bad.

We hopped on the first available ferry and headed off across the water. I looked at the tickets only to find we were going to Fishbourne and not to Ryde as I thought, so I had to send Sean a quick message and tell him to meet us at a different place! 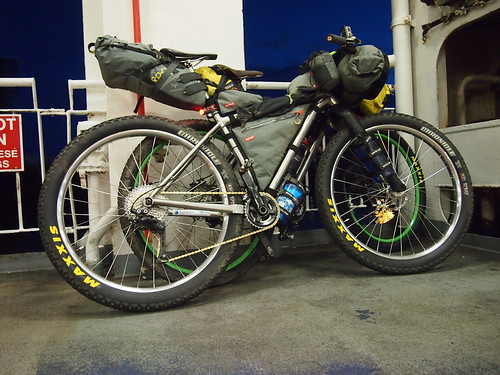 I’d exchanged a few emails with Sean previously while looking for potential bivvy spots as luck would have it he was free Friday so he decided he’d join us for the bivvy and the ride Saturday, he couldn’t do the Saturday night too though. So we got off the ferry and thankfully we were all where we should have been and meeting was no problem. We headed round the corner to the pub so John could get dinner after his five hours in the car and then we rode off to find our first bivvy spot.

Fortunately it wasn’t too far and after riding round in circles a few times in Firestone Copse we found a suitable spot and set up camp. Rain wasn’t forecast, but it decided to anyway and I was glad I’d bought the Tarp too as well as the bivvy bag.

Come the morning we were up early as we had to meet Dan and Meraid off the ferry at 08:00. We took the road to Cowes and arrived just in time. Dan and Meraid had got up early to get that ferry so we decided breakfast was the order of the day and headed on the road to Newport. Eventually we found somewhere that was open and had a good feed before heading off road at last. 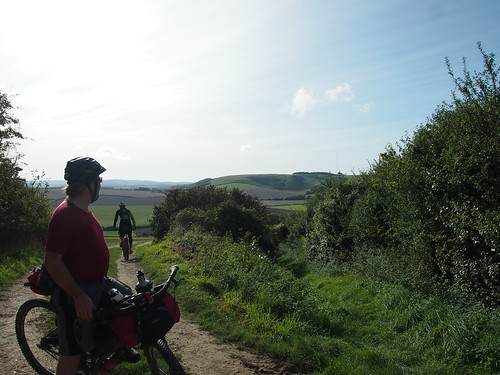 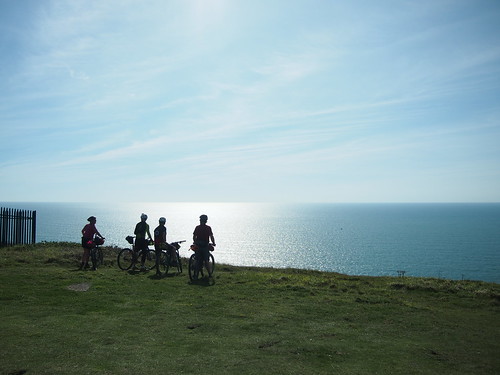 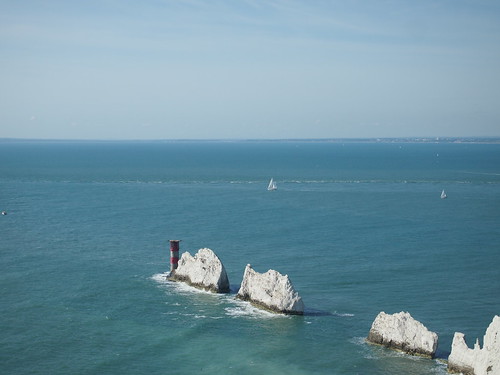 The plan was to use as many off road trails as possible and also visit the four “pointy bits” of the island. The bonus was though having Sean, an islander, with us too hopefully we’d get to ride some other good bits as well.

The weather was great and climbing onto the top of the ridgeline the views all round were fantastic. This was where local knowledge paid off and Sean showed us some great singletrack through Brightstone Forest that we definitely wouldn’t have found otherwise! Singletrack done with we headed across the fields before joining one of the many disused railway lines and turning west to aim for the needles.

Sean was telling us about the old Needles Battery and we decided that was where we would stop for lunch, but not until we’d completed the big old climb to the top. It was great to sit down, fuel up and relax and was also good to have a look at everyone’s bike set up and see what gear they were using. 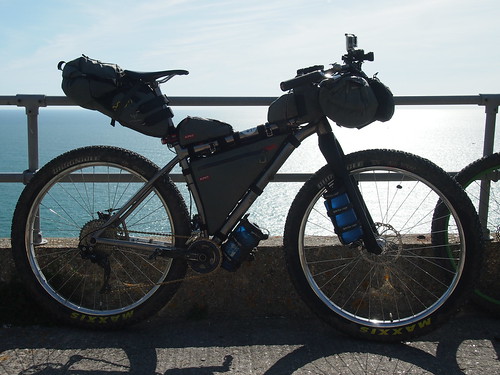 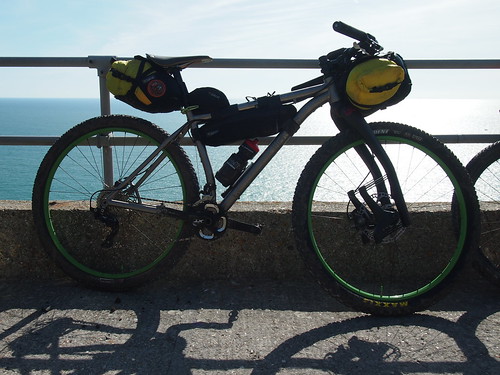 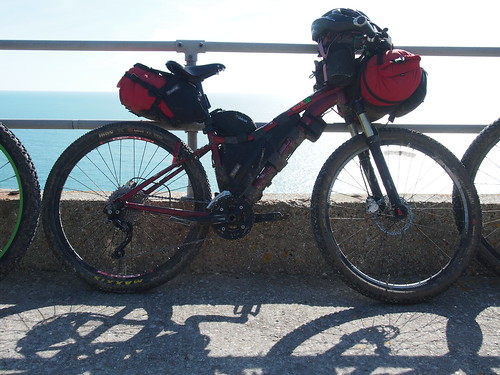 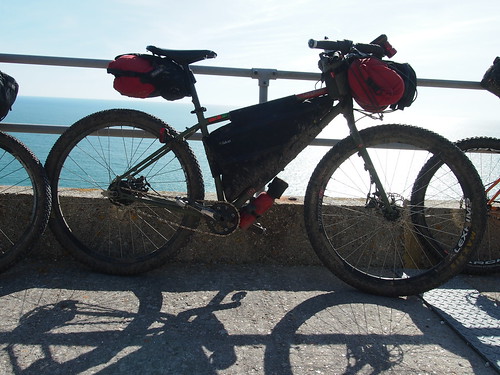 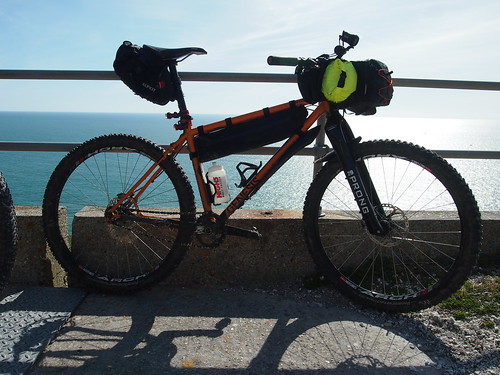 After that it was time to turn round and head for the Southern point. This involved a series of quite meaty climbs and we were all feeling the burn a bit. As we got onto the downs above Shorwell Dan and Meraid decided that they would skip the southern point and we arranged to meet them later at the pub in Godshill. 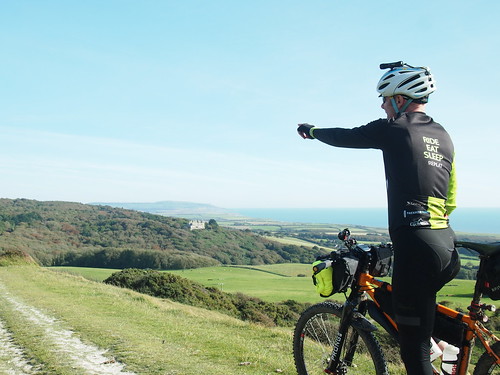 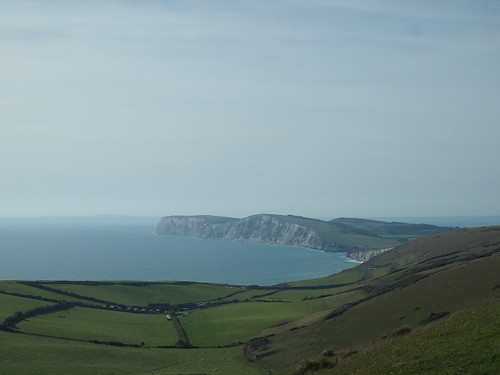 In the mean time we headed south east and after we’d dropped off the ridge line the road was used for a bit to knock some miles off quickly, even though it was a bit like the Isle of Man TT at times. We got as near as we could without dropping right down the hill and then turned tail and headed to Godshill to meet Dan and Meraid.

Fortunately they appeared not long after us and we stopped for a beer and some food. Sean had to head off at this point so we got a pointer for a good bivvy spot off of him and he headed off home. We were all feeling pretty tired after 54 miles and 5000 feet of climbing so we slooooowly rode up the hill and as there was no one in at the holiday home near Freemantle Gate decided we’d stay there for the night. 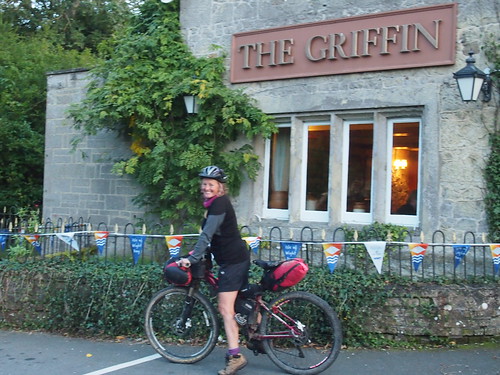 “The Griffin” was in residence! 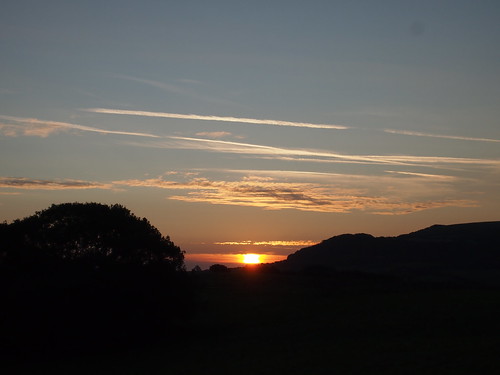 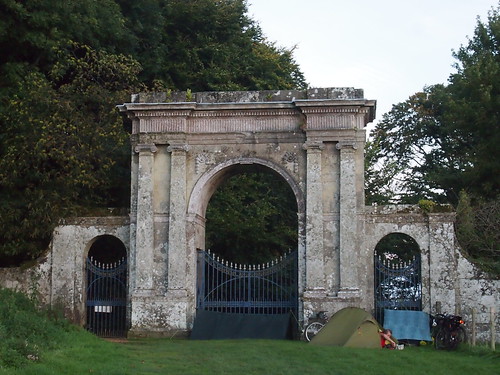 Sunday morning arrived and after a night where I was viciously savaged by something that found it’s way into my bivvy bag it was time to get moving as John wanted to get back to the ferry by lunchtime. Dan and Meraid had stuff to do as well so we left them on the cyclepath, where they turned left for Newport and we Turned right for Sandown.

Tired legs were happy with a ride along level ground and we were soon in Sandown and it was time for a second breakfast. 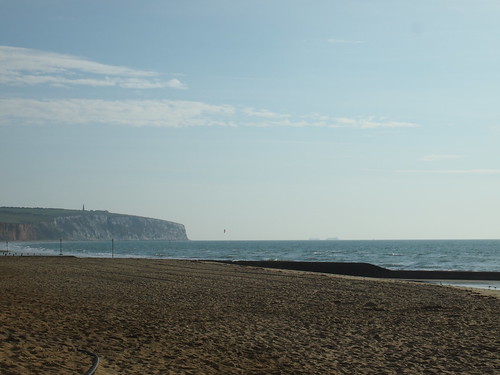 Then it off to head for the last “pointy bit”, we’d seen lots of people riding and it wasn’t always obvious which bits of the coastal path you could ride on and which bits you couldn’t, so we went a bit cheeky and rode up the path to Culver Down. The climb looked horrendous, but in the end it really wasn’t too bad.

We stopped for a “Team Travers Adventure Dept.” photo at the top…. 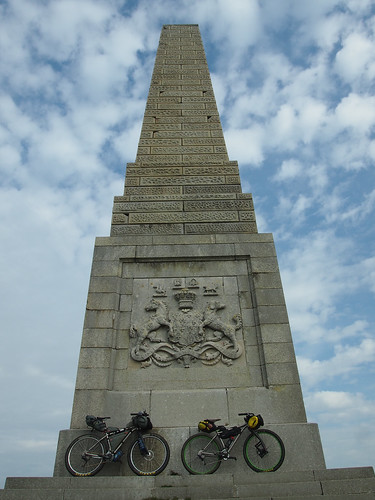 Then it was down to Bembridge 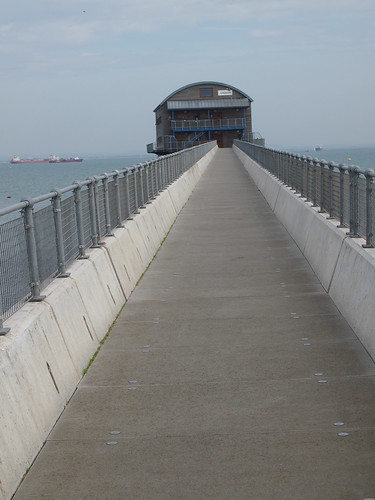 From then on we stuck to the coastal route and after realising I’d gone the whole weekend without a Magnum we had one final stop at Ryde for ice cream before returning to Fishbourne and boarding the ferry back. 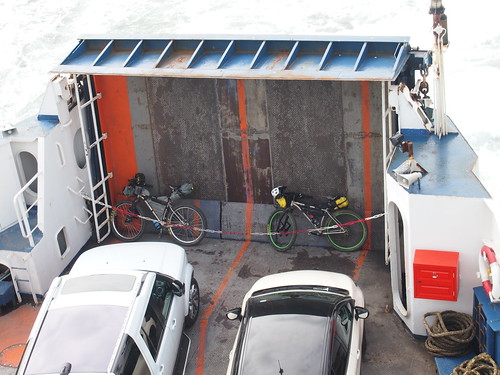 So to round up I’ve got to say a big thankyou to John for spending ten hours of his weekend in the car to get to the Isle of Wight and back, Sean for giving us the local knowledge and great singletrack and Dan and Meraid for the company, it was great to hear some tales of your trips.

As much as social media gets slagged off for time wasting, but the one thing it is good for is getting groups of people with niche interests together and the Facebook bivvy page and Bearbones forum are great examples of communities of helpful people. 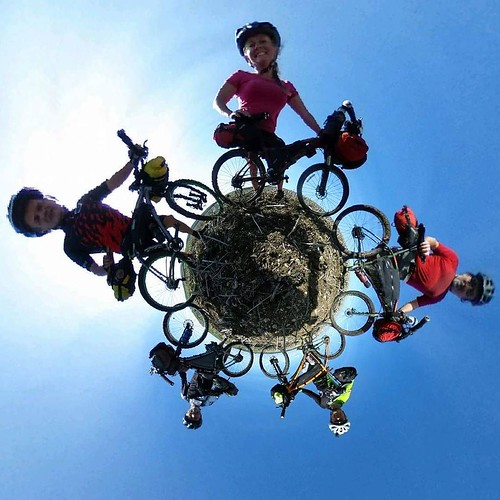