A recent look on the equipment page on Strava revealed that my Travers and I have now spent 5000 miles together. It’s quite interesting to look back at the original photos and see how the kit on the bike has changed since it first turned up in November 2015, but I can safely say that now the fit and the equipment is totally dialled and anything further that I feel like changing would only really be for cosmetic reasons (yeah I know, I’m a tart).

I'm not going to lie, I'm #stoked with the new arrival, thanks @traversbikes for letting me get the custom changes I wanted. #titanium #tilushness #gdmbr #TourDivide #2016

I’m a lover of shiney stuff and as a previous titanium frame owner I knew that was what I wanted for comfort. I was planning to ride the Great Divide Mountainbike Route in the summer of 2016 and I wanted everything to be perfect.

I went for Travers own titanium handlebar and seatpost. The seatpost has been great, it’s got a bit of spring in it and in conjunction with a titanium railed saddle it offers a comfy perch. The handlebars though I just never hit it off with. They don’t have a lot of sweep and I found I just couldn’t get comfortable. 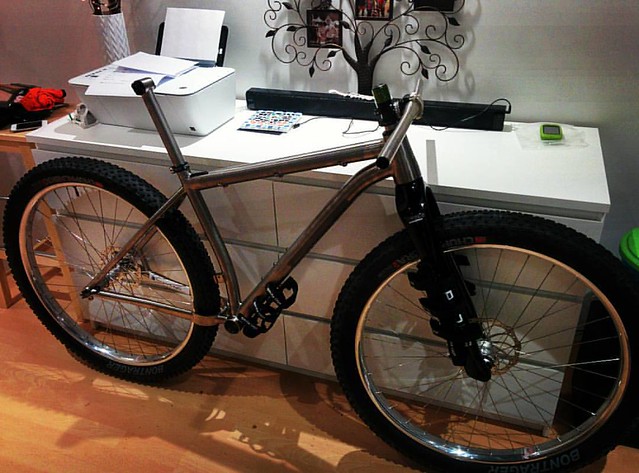 This was particularly annoying because I’d imported a set of BarYak extensions to carry my kit and ultimately I couldn’t find a flat bar that I was happy with, so in the end these went onto Tom’s bike for the trip. 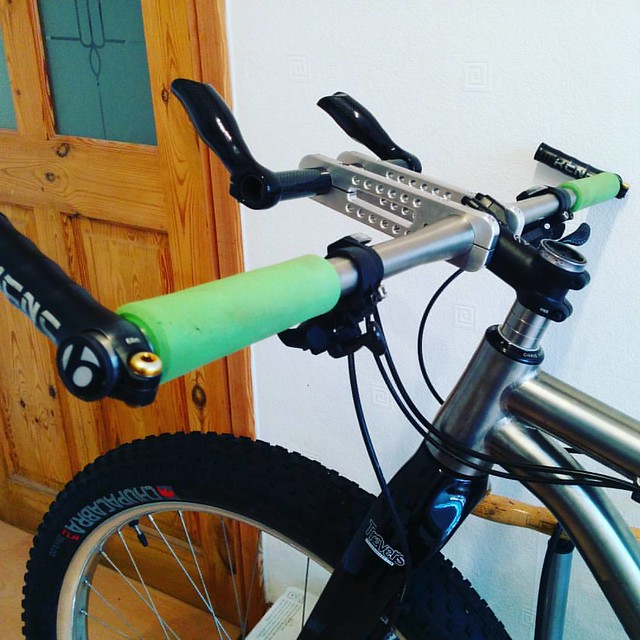 Ultimately, despite the fact I’ve tried others since the trip, I used Jones Loop Bars for the trip and they remain on my bike now. Supremely comfortable. I’d really like a titanium pair so it all matches, but they’re nearly £400 a pair so I guess I’m going to have to wait for a lottery win for that one! 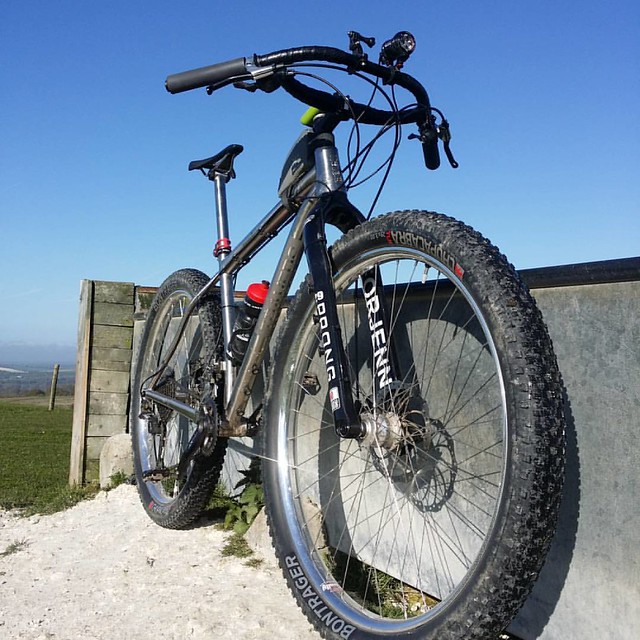 My Travers frame was subtly different to the stock frame in that I had all cables routed externally, not internally. I knew I didn’t want the hassle of trying to rethread cables if I needed to do a backcountry repair. It has extra equipment bosses under the downtube, which I had put on to carry my toolkit.

The big difference though is the front mech, the standard model is for a single chainring, but I knew with a fully loaded bike and repeated long days in the saddle a wider range of gears would be the best option.

Having done all these miles on it now I can say that it was definitely the right choice. That said it does seriously compromise how the bike works in the mud, the clearance on the inner chainring is not very big. When I get the chance the XT chainset will be swapped out for a Surly O.D. crank, just to give it a bit more space. 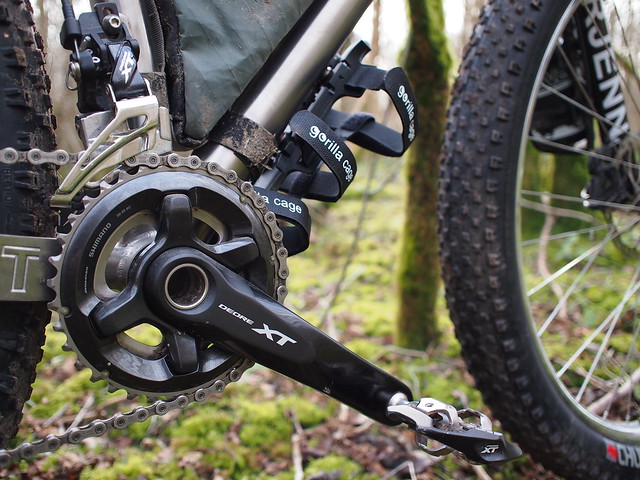 The brakes have been great, the cable discs were again fitted for ease of repair in the backcountry and they have proved very reliable too. These are the other part I would consider changing now though, having seen Paul’s Components Klamper calipers and Love Lever brake levers, yet again this would require a lottery win though! 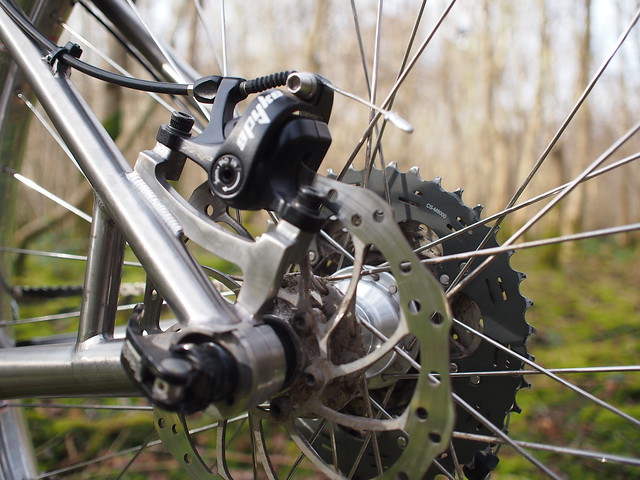 The other extravagance was the rims, I just couldn’t decide whether to go for black or silver rims, when I eventually saw the Velocity Dually’s I knew they were perfect. The downside however was that they weren’t available in the UK, I ended up having to get them imported from the states and the postage was unbelievable! 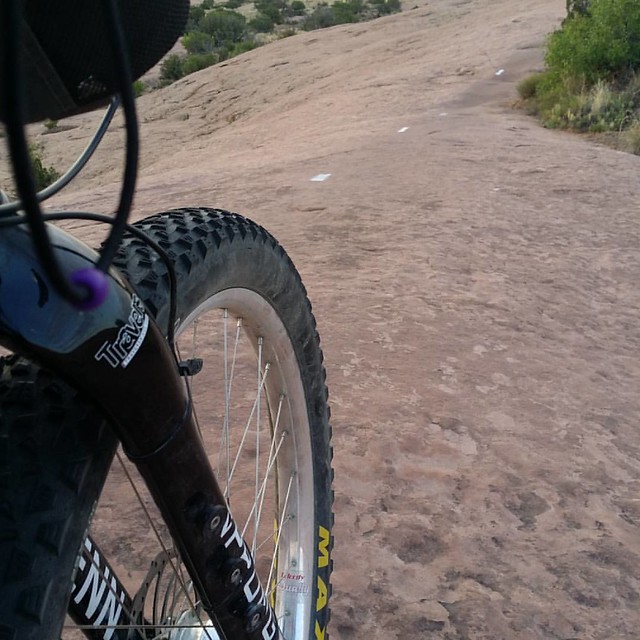 So there you have it, I *LOVE* this bike we’ve done 5000 miles together and we will certainly be doing many more. Lot’s more stuff planned for 2018 and beyond, this weekend we’re off for the Bear Bones Bikepacking Winter Event…… 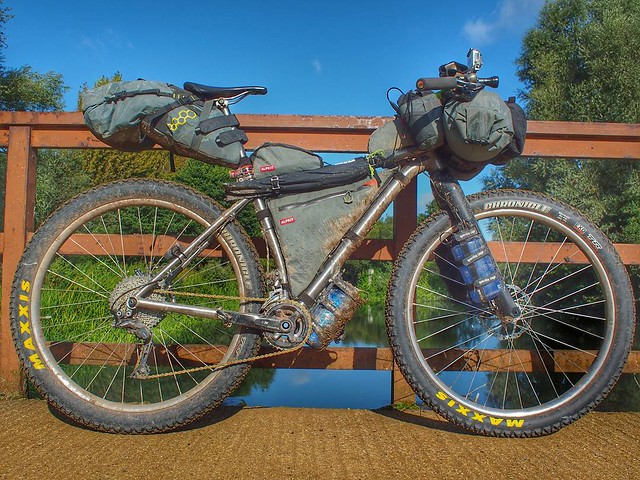