After last year’s not so successful attempt it was time attempt to ride to the West Country to meet my family for our holiday again. This time I was sensible enough to actually give myself the time to make it and actually bring along some company for the ride too.

Numbers dropped at the last minute, but Daryl would be coming as far as Bristol and Christy all the way to Plymouth.

Day 1 started on familiar ground and we rode along the South Downs Way, Christy was the only one of us in possession of inner tubes and he repaid us but getting a puncture almost immediately just north of Findon. We continued all the way past Queen Elizabeth Country Park, almost to Winchester Hill before turning north. This was where we left the South Downs Way and headed onto the Wessex Way route. This was awesome, with lots of brilliant bridleway sections and quite a bit of climbing too. We stopped in New Arlesford for food, then Christy got another puncture and we called it a night in the middle of nowhere near Preston Candover. 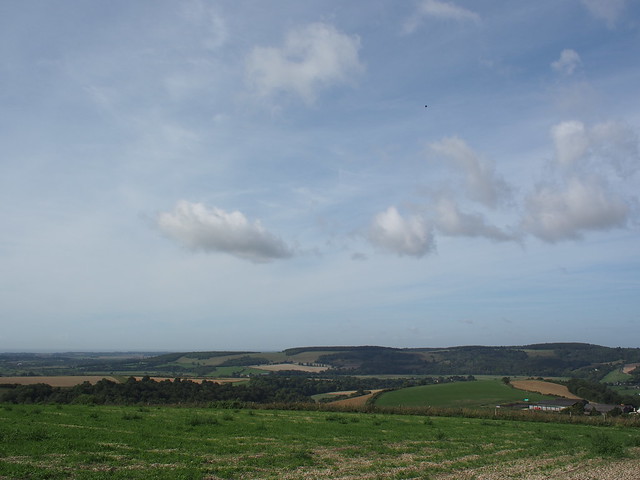 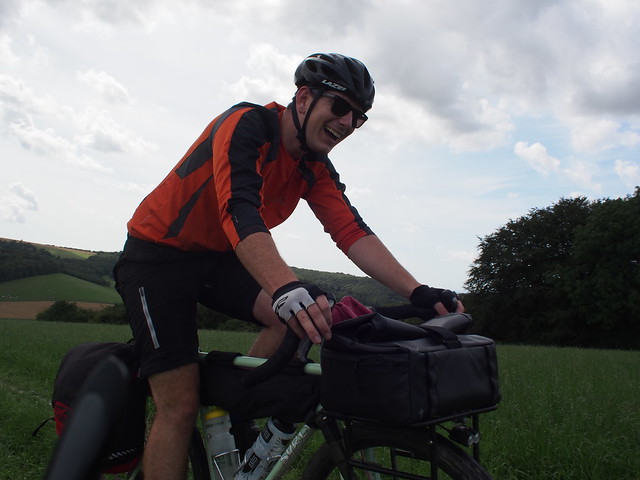 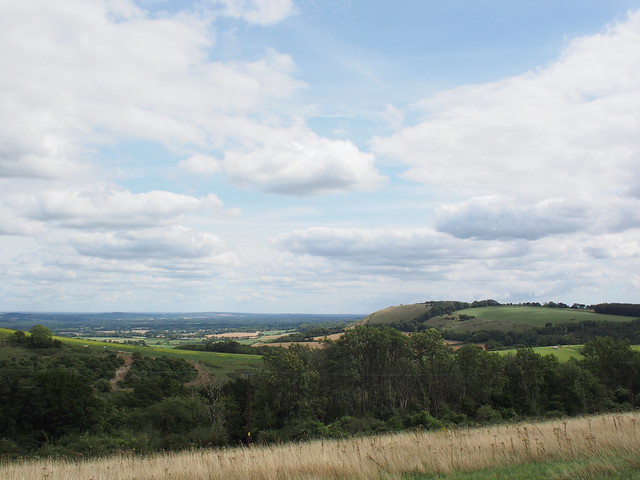 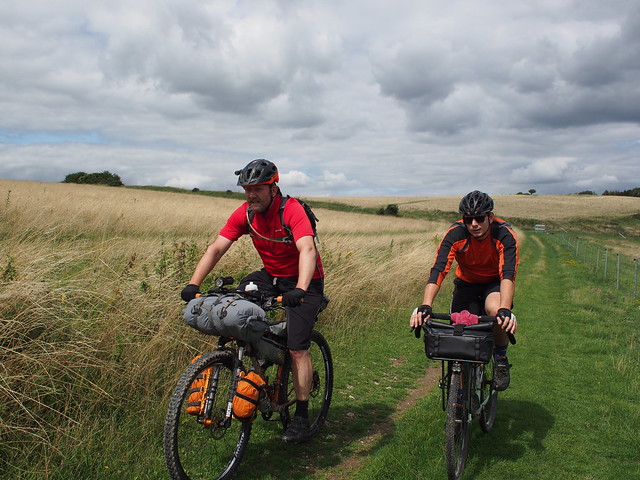 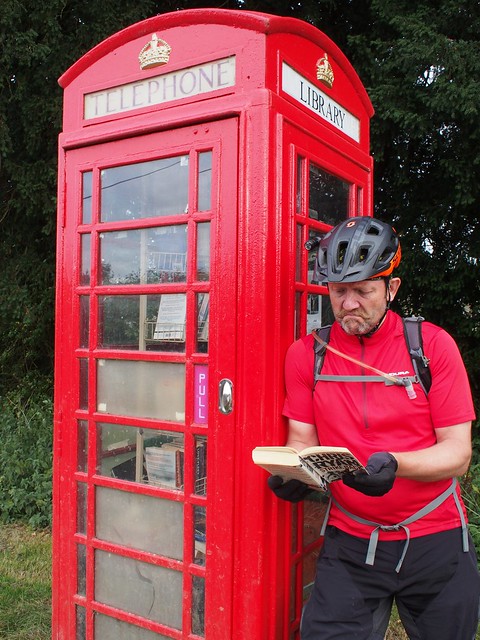 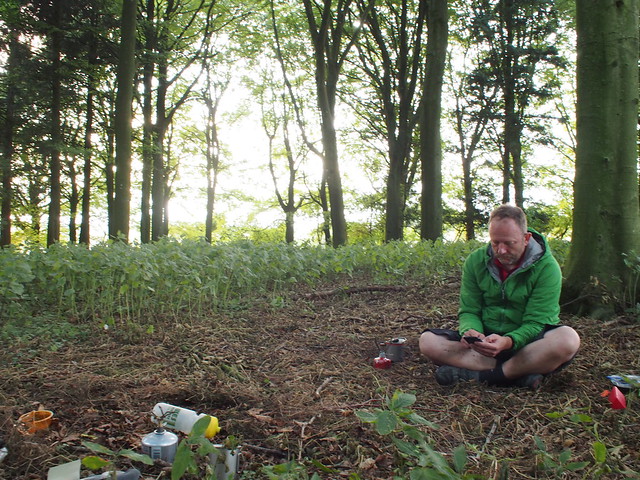 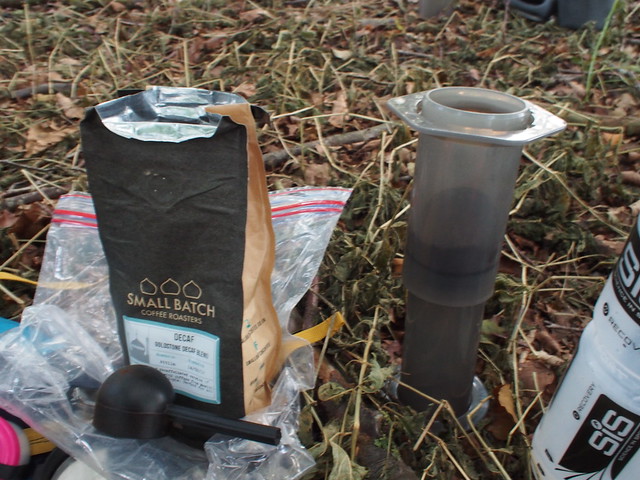 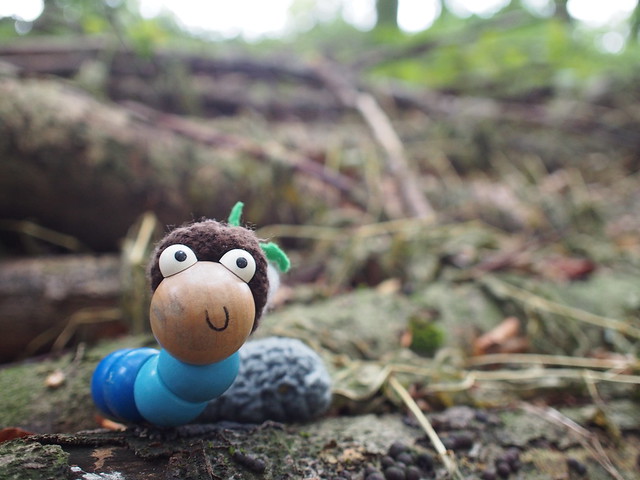 Day 2 called for a rethink due to all the punctures and we diverted to Basingstoke for a second breakfast and then stocked Christy up with inner tubes from the bike shop. Of course after this he didn’t get another puncture, but that’s the price you pay!

For the first time I used the auto route choice on the Garmin and let it guide us to Woolhampton, where we joined the Kennett and Avon canal and NCN4. After that it was easy, if non technical or exciting miles along the tow path. We stopped at the pub in Hungerford for some overly expensive IPA, had some lunch at the cafe in Pewsey and then bought our dinner in Devizes. It was still too early to set up camp, we had decided to go right next to the canal so we needed some darkness. We cooked up dinner next to the Caen Hill lock flight and then headed to the pub.

After a couple of beers it was suitably dark, so we headed back to the locks and set up the bivvy bags. 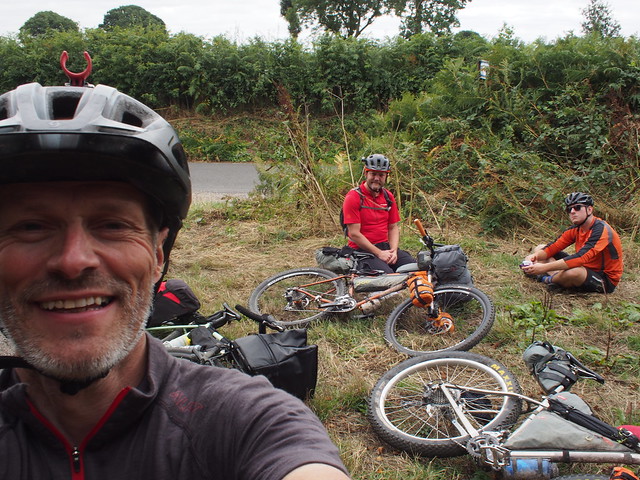 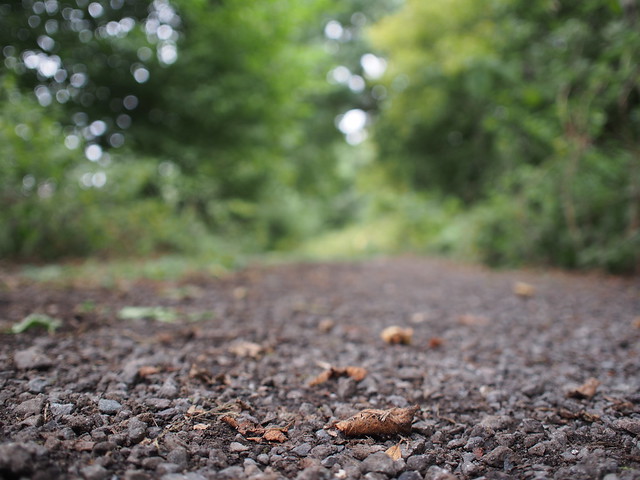 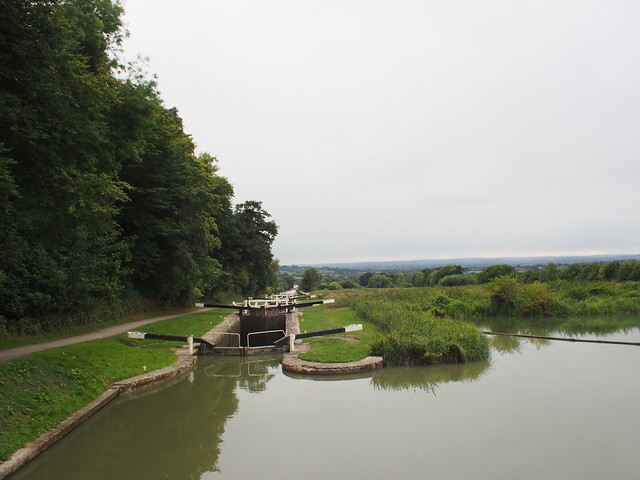 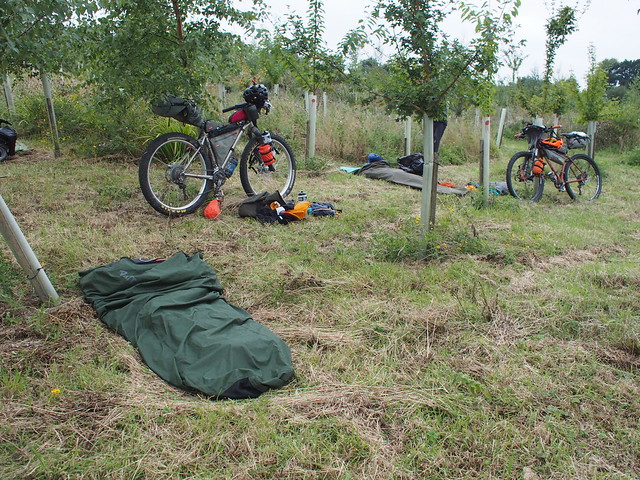 Today was the day we really needed to get some miles under our belts, it was flat all the way to Bristol so we stopped of in Bath for a proper Bath Bun, which was a little under whelming! The going was good and we got in to Bristol at lunch time. Daryl bade us farewell at Temple Meads station and we switched from NCN4 to NCN3, turning South West.

It was pretty flat till we hit the Mendips, then it was a super long draggy hill, this was awesome though as it gave us a long and super fast descent into Wells, 41mph to be precise!

Back on the flat we made it into Glastonbury and bought our meals to cook later as well as some sandwiches.

We looked at the next parts of the route and Christy remembered that a family friend had a fishing lake with caravans at Bridgewater, The Sedges Fishery, a few calls were made and hey presto, we had a roof over our heads for the night!! Thanks you so much guys, it was greatly appreciated. 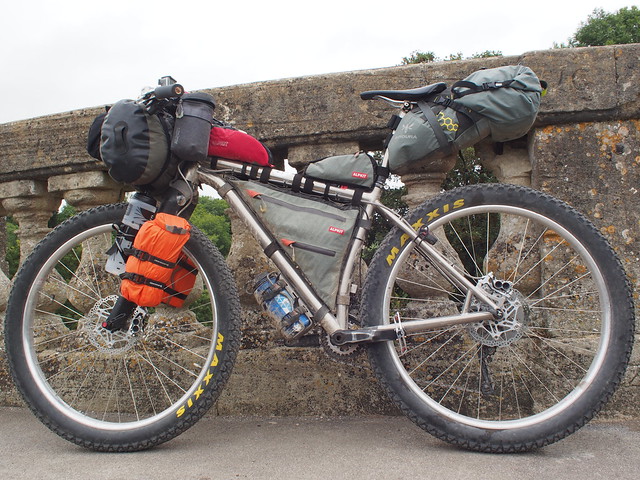 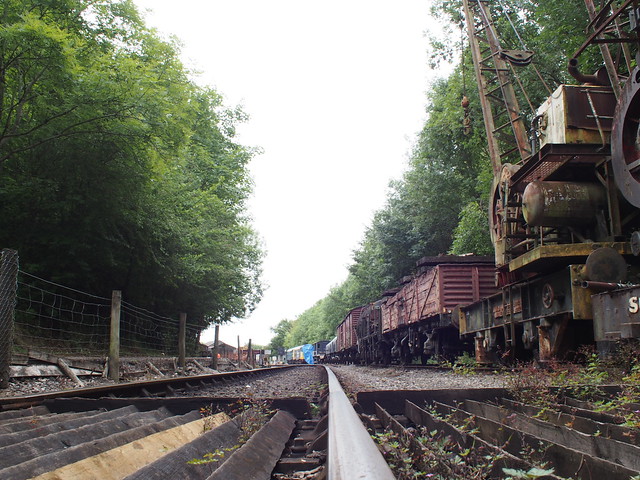 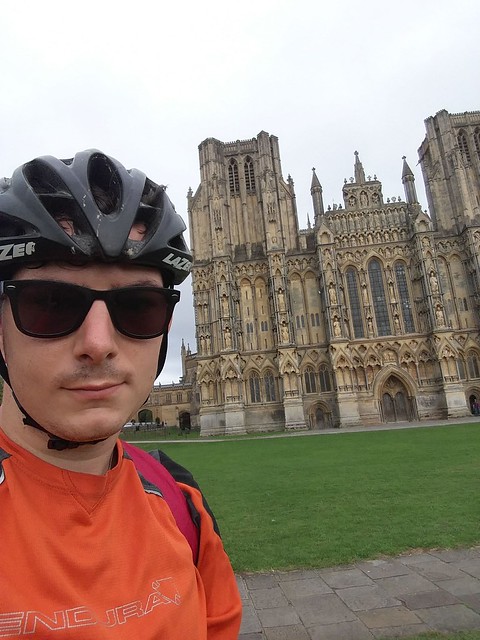 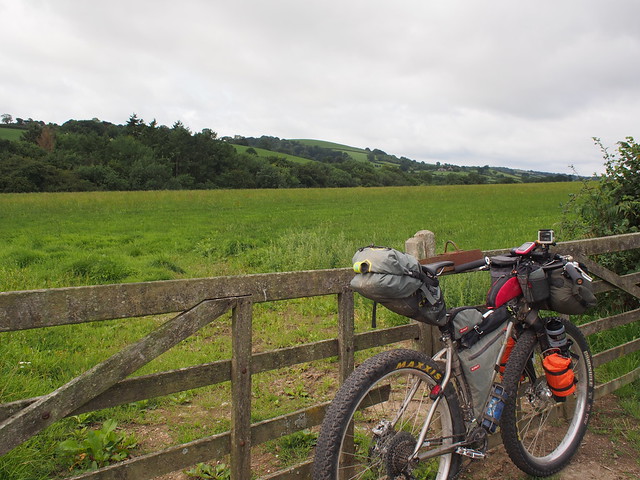 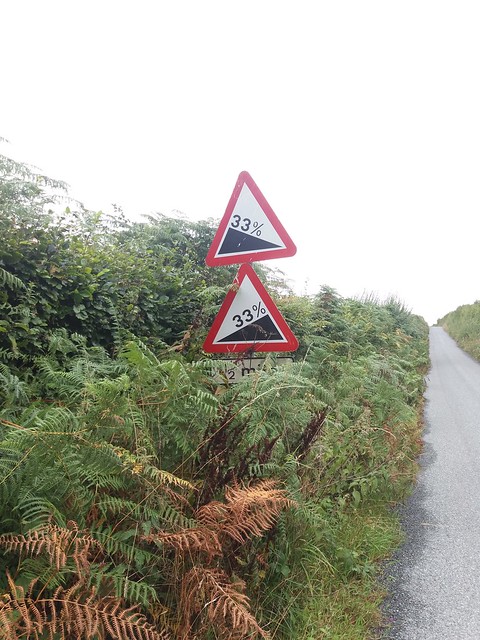 The first part of the day was an easy roll out along the tow path to Taunton for second breakfast, then the climbing started, it would be fair to say that this part of the world is not unlike a wrinkled table cloth, it was up, it was down, but rarely flat!

Eventually we ground to a halt on the Tarka Trail, it was only about six o’clock though, too early to set up camp. So we cooked dinner, annoyingly we found that the area was a bit too “bitey”, so reluctantly we carried on. We soon came across North Tawton and there was a pub, we’d really had enough for the day so we went in for a pint. The barman took one look at us and said “you look like you need it, the first one is free!”. Now that was awesome, thank you White Hart!

We asked if there was anywhere nearby that was flat where we could camp and they very graciously said we could use the grass in the beer garden, in the end though as we only needed space for bivvy bags we actually slept under the cover of the smoking shelter, which turned out to be a good move as it rained overnight. 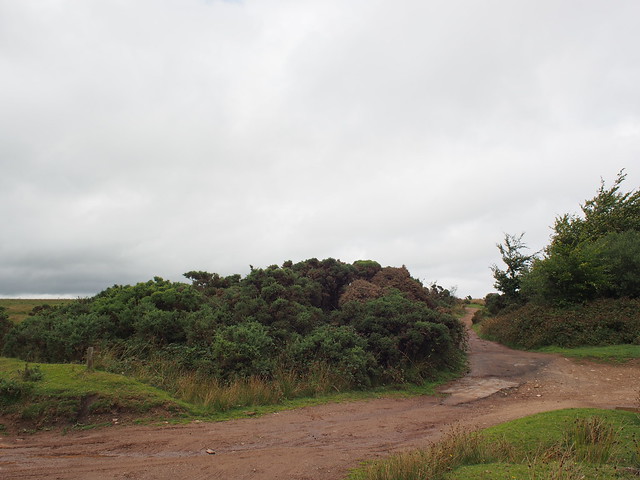 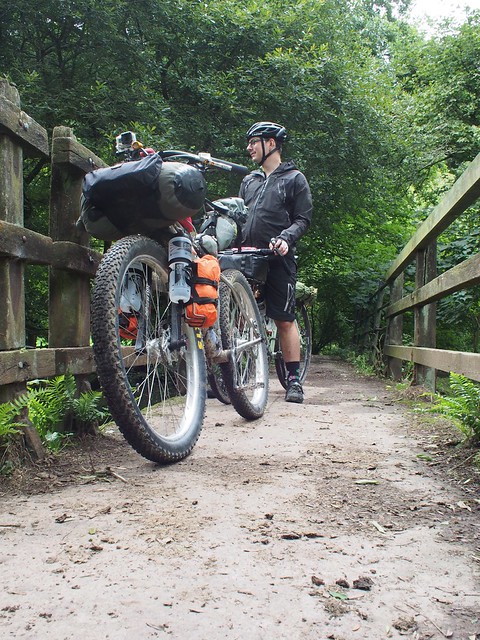 Onto the Westcountry Way route from Bikepacking.com and we were finally treated to some singletrack round Castle Drogo. Second breakfast was in the lovely Chagford and we headed south again under a blue sky, perfect weather for Dartmoor.

Or so we thought, damn it was hot! The long steady climb from Chillacombe was punishing under the hot sun and we were happy to finally top out. We sat in the shade with our backs against the wall and recovered before dropping down to the River Dart where we were greeted with some proper technical mountain biking and two river crossings with big, uneven, slippery stepping stones.

We’d under estimated the heat of the day and we both ran out of water, so we were greatly relieved to stumble across Badgers Holt tea rooms and spent way too much time and money there.

After that we were both pretty pooped so we deviated off the planned route and did a road section and climbed all the way up to Princetown. We went in the Spar and struggled to find anything to buy for dinner and eventually had to settle for spaghetti hoops and jammie dodgers, a culinary delight!

There was an old railway path from Princetown that headed towards Plymouth, so we decided we’d get as close as we could and then camp. We stopped to cook dinner on the hill overlooking Burrator Reservoir and after eating realised it was still only about six, so a quick google revealed that the was a pub a mile away.

While we were sat outside drinking at Meavy a roadie went past and stopped to chat about our bikepacking gear, we took the opportunity to ask him if he knew anywhere good to camp and he suggested going to the pub in Yelverton, then we could camp in the gorse on the moor opposite, this was a great choice. Only a couple of hundred yards from the pub, but totally out of site. 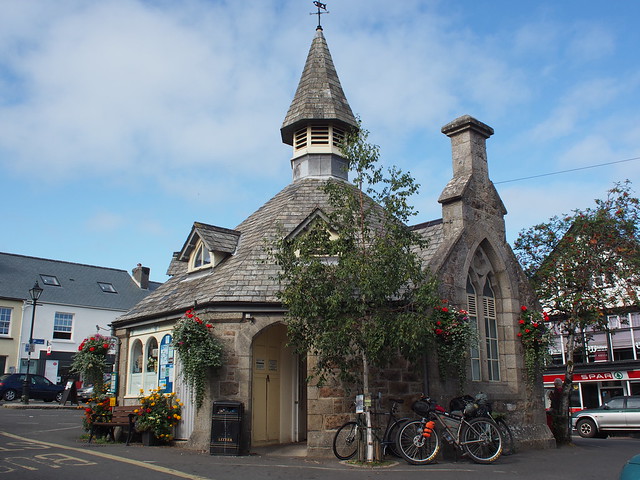 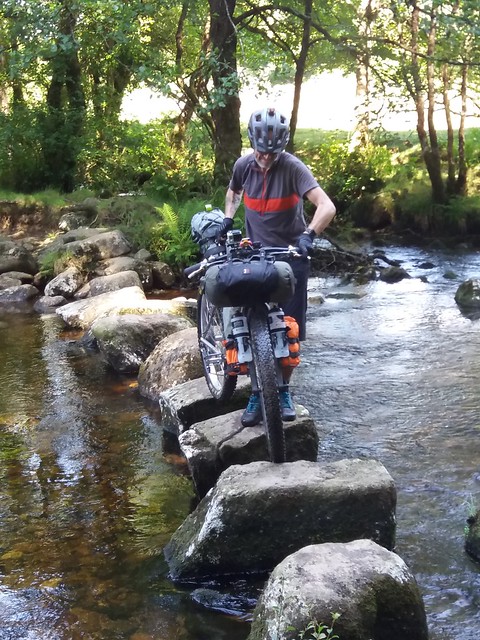 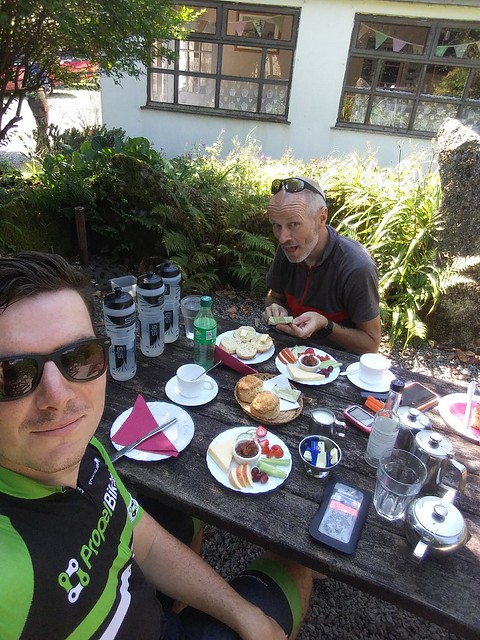 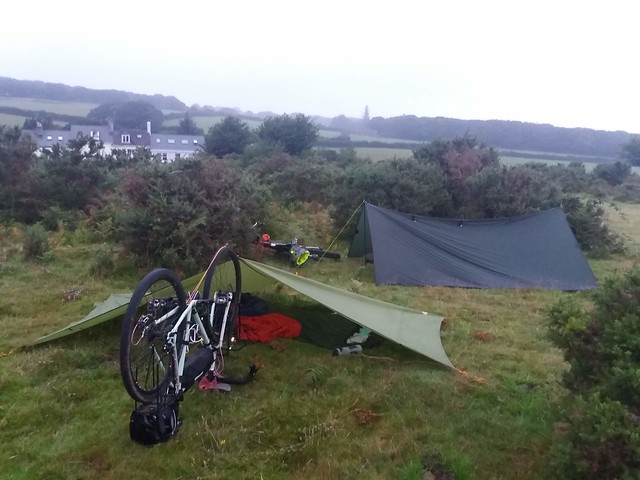 The following morning was light drizzle, but it didn’t really matter, it was ten miles downhill to Plymouth and by seven thirty we were drinking coffee in the station.

It was a great trip and this time it worked well, I hopped on the train and was back with my family by eleven, job done.

This was the route we took in the end, not exactly what we planned, but ultimately it didn’t matter. We had a great time!

Here’s the video from the trip……