We’d decided that just for a change we’d do a multi day ride in Normandy, instead of doing the Welsh Ride Thing, though actually I got a real case of FOMO and ended up going and doing that too!

We were looking to get in as much off road as possible and I used Komoot to plan the route. The reality is it was more of a gravel ride than a MTB one, but I’m sure there’s more trails there only without local knowledge it’s not easy.

The route was a touch over 200 miles and the intention was to do 100 on day one to give us an easier second and third day, the reality ended up being a little different thanks to the weather!

We had a decent weather forecast so we decided that rather than take the train we would ride to Newhaven to catch the ferry. As it sailed at midnight we grabbed a coffee at Small Batch and then took a lazy ride over to Newhaven to meet the others at The Ark for a few pre ferry beverages. 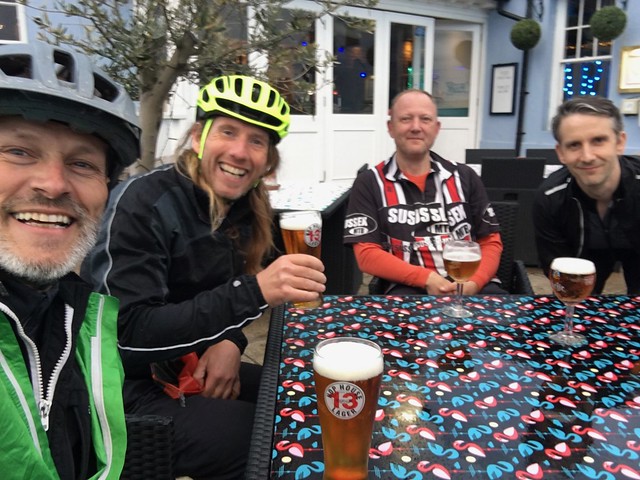 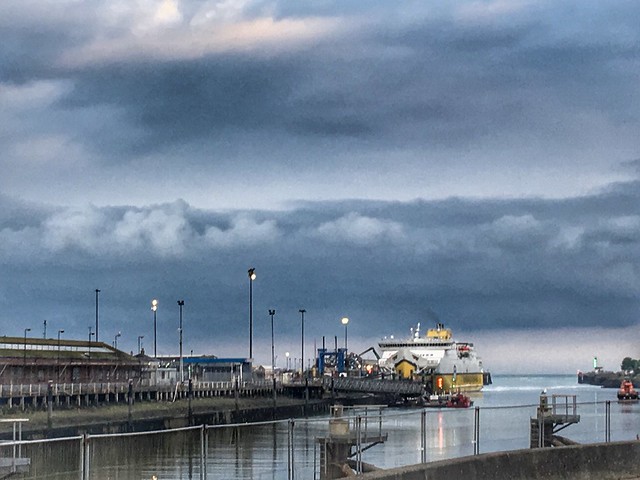 We got onto the ferry and had a 50 / 50 split, some of us had booked a cabin, the rest were out in the main seated areas. This turned out to not be the best idea in the world, previously I’d got a decent amount of sleep, but this time I only managed an hour, so when we rolled off at 05:00 the next morning I was feeling a little jaded!

We headed out of Dieppe and fairly quickly got off road with a nice downhill through some singletrack, the sun had started to peek over the horizon and the stage was set for a great day of pedaling. 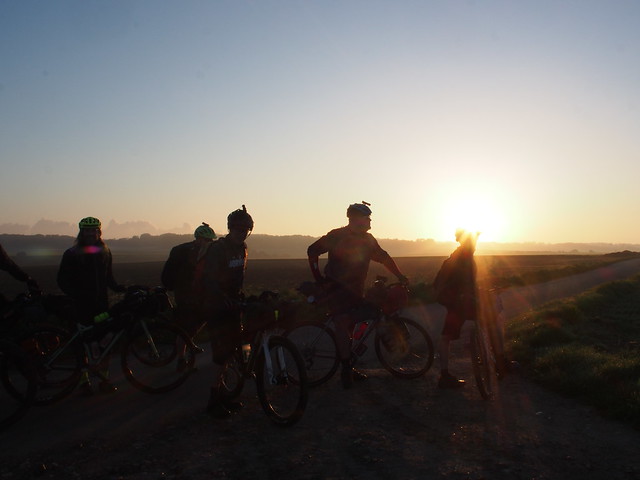 As it turned out after the initial hills where there were some fun bits of trail the landscape then levelled out and we were left riding quite a few tracks round the edges of fields. 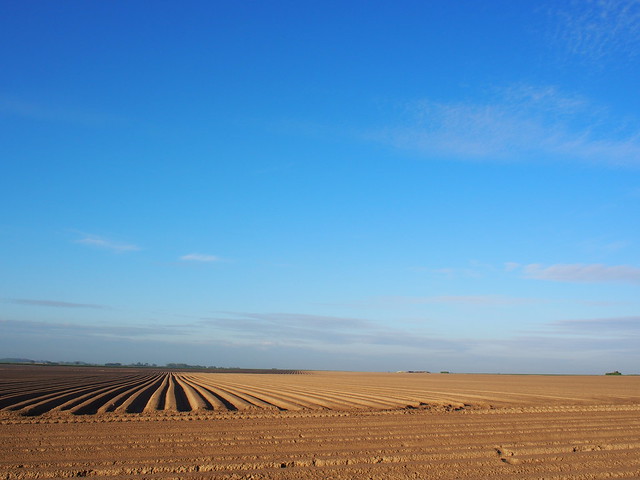 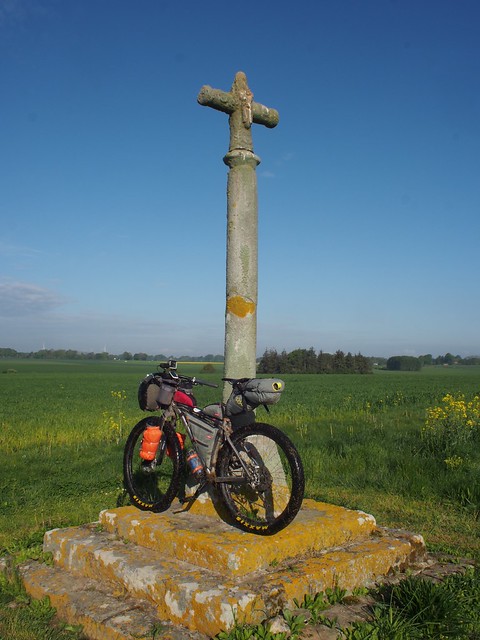 Stomachs were rumbling after such an early start and once we’d got into normal shop opening hours we stopped at the first village we could find with a shop open to grab some food. Our French language skills (two years at senior school in my case, 35 years ago!) were tested, but we all managed to get something we wanted and were fuelled up for the next section. 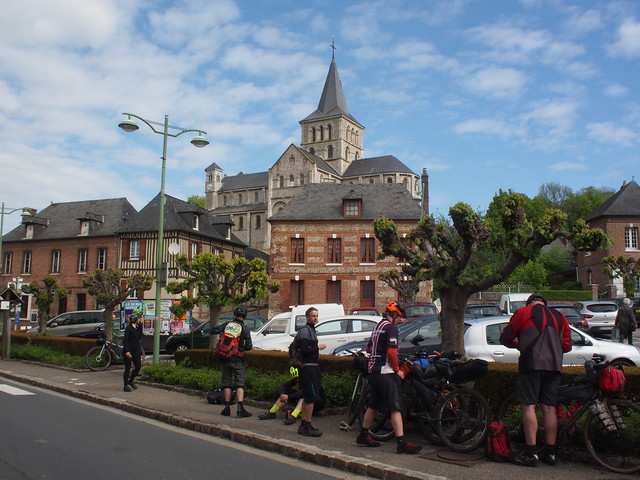 We cut a few bits out and did some back lanes and unfortunately Dougal’s freehub body decided it would take this inopportune moment to fail. We were left bouncing his bike up and down till eventually the freehub caught again, we couldn’t risk off road with too much intermittent pedaling so we opted for the road for the next section.

We found a supermarket in Lillebonne and stopped for lunch, as we were eating the skies then decided to let rip and we all donned waterproofs before setting off again. The day had really caught up with me and despite the fact it was stair rodding it down with rain I ended up falling asleep on the bike and veering off the road several times! 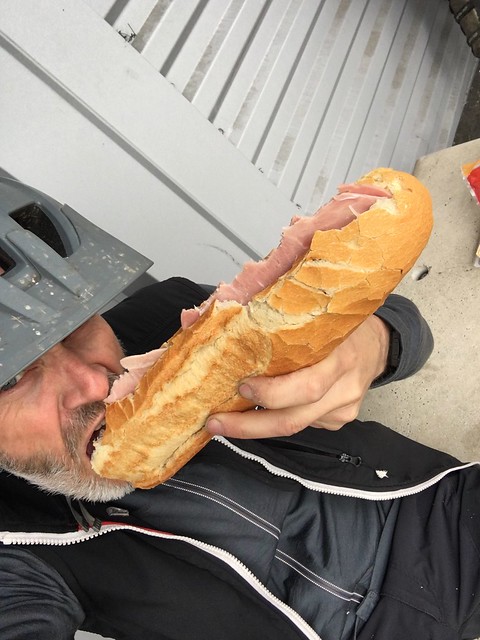 We headed up over the frankly terrifying Pont du Normandie protected from the traffic by only a foot high kerb, the lorries tore past in the pouring rain spraying us as they went, watch the video to see this!

We were all soaked and cold so decided another stop for food and to take stock were needed. We stopped at the old harbour at Honfleur, which would have been great in the sun, but we shivered under an awning and ate crepes and drank hot chocolate instead.

A quick poll and we decided a hotel for the night would be a much better option to dry out than spending the night in a bivvy bag so we booked a couple of rooms, or should I say cupboards, in the Premier Classe Hotel in Touques. I’d love to say we had a great night of chat before settling down and chilling out, but the truth was we were all totally knackered after 81 miles and about four hours of torrential rain, so it was showers and then quite literally lights out in seconds! 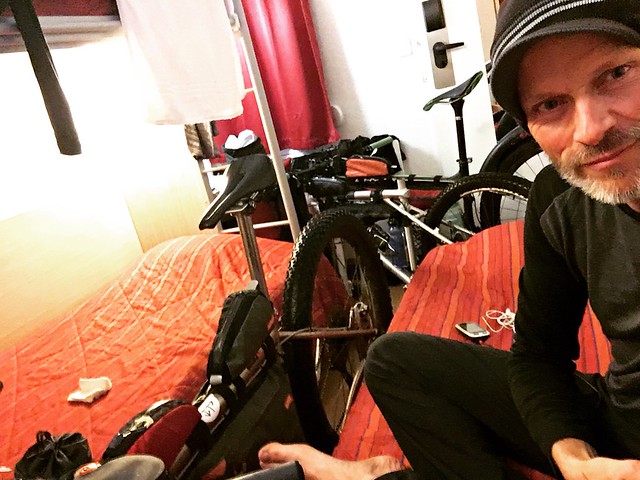 The next day started with 30 second ride from the door of the hotel to the door of McDonalds! The weather started rainy, but the forecast was good, so we were looking forward to getting out of waterproofs later in the morning. Dougal’s freehub body was still working as and when it deemed fit to do so, but he soldiered on with his fingers crossed. 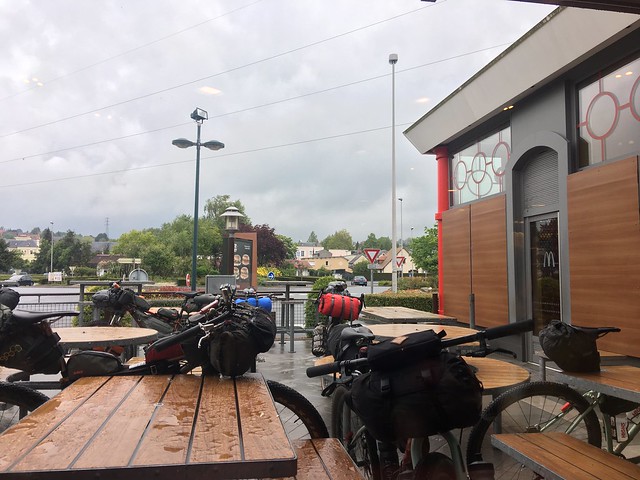 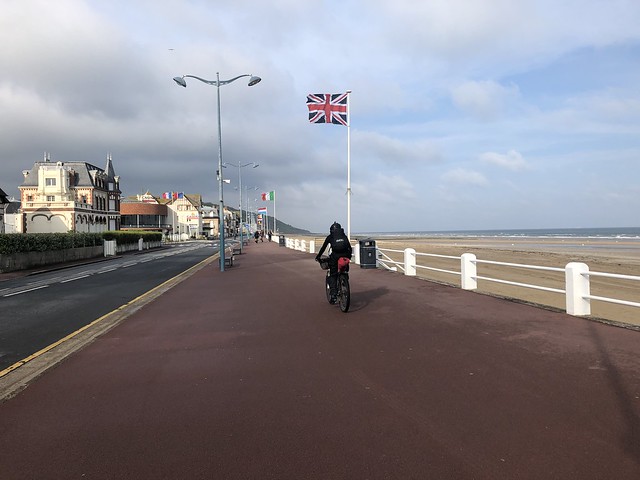 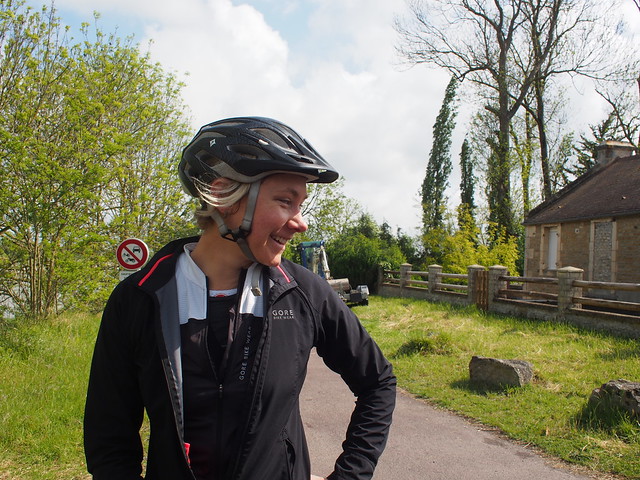 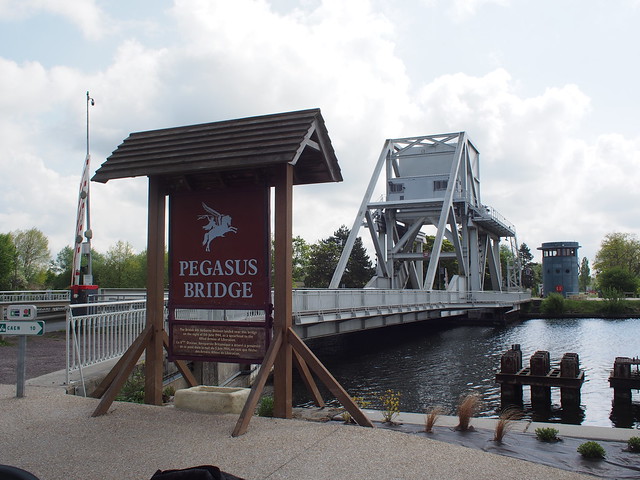 The morning consisted of cycle paths and back lanes along the Normandy beaches, the weather started to pick up and we stopped for a snack at Pegasus Bridge.

We were the source of some consternation to the cafe owner as I can’t have caffeine and they had no decaf, so I opted for hot chocolate. Things got more amusing though as Dougal is a vegan and apparently that is something that makes no sense to french people. He ended up with a salad sandwich with no butter “you want it dry?” she said, yes, he did 😂 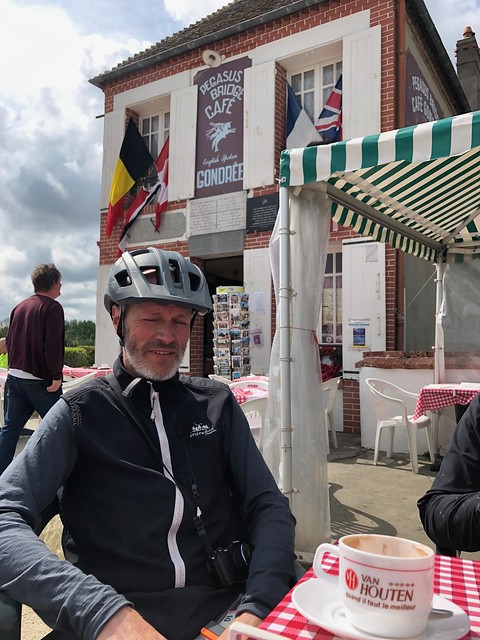 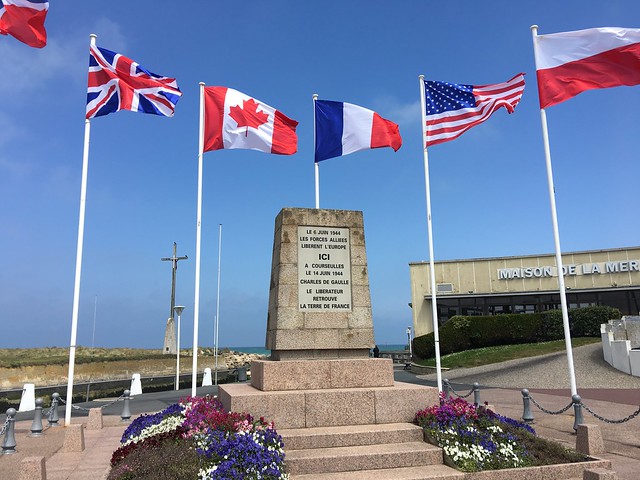 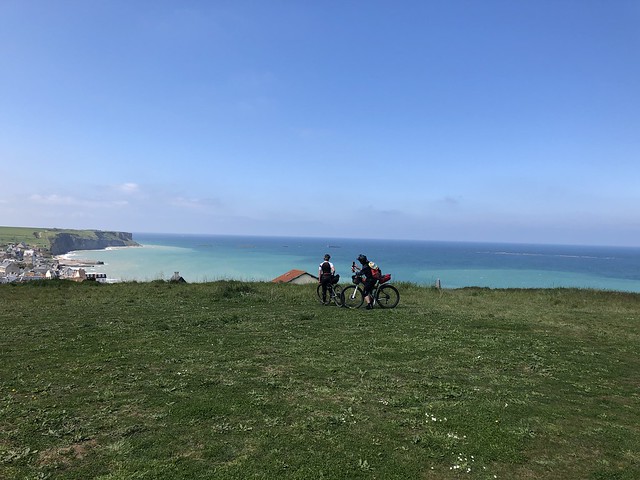 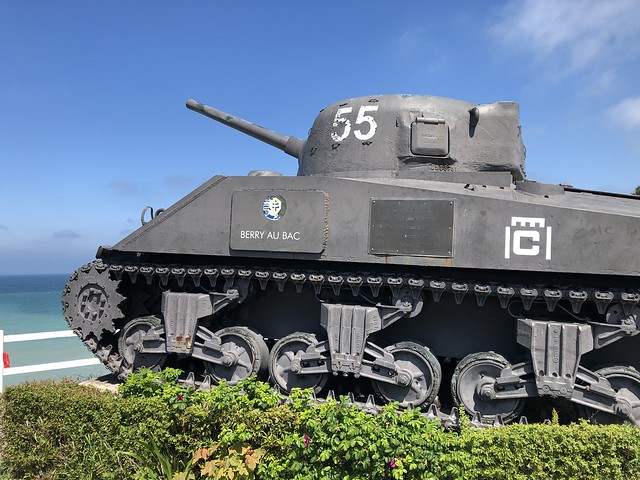 Then it was more beach front riding till we got to Arromanches-les-baines for lunch. The sun was out in full force and it was nice to finally be warmed up enjoying the weather again, indeed it seemed only logical to have a couple of beers for good measure. 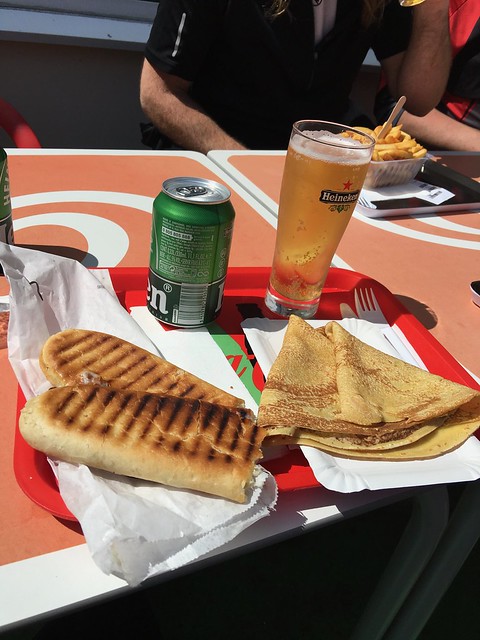 The tide was out so we took the opportunity to reflect and rode along the Omaha Beach. 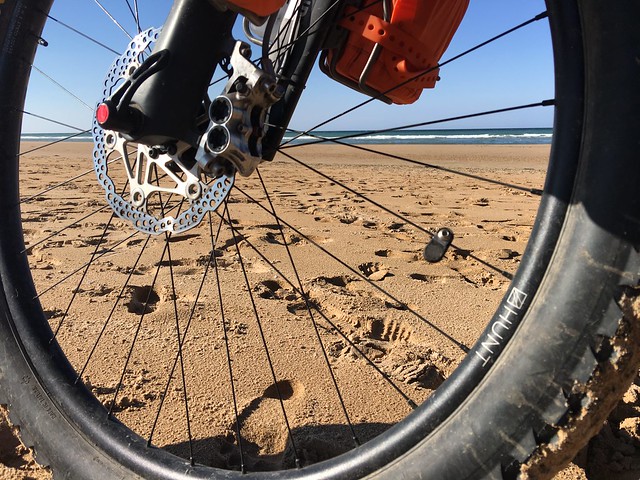 Time was ticking on and because we had the previous day cut short by the weather we had to knuckle down and get some more miles covered, we decided a shower would be nice and by the time we rolled into Le Haut Dick (!) campsite in Carentan we’d covered 80 miles again.

We got some local beers and cooked our own dinner before passing out in a bivvy bag. 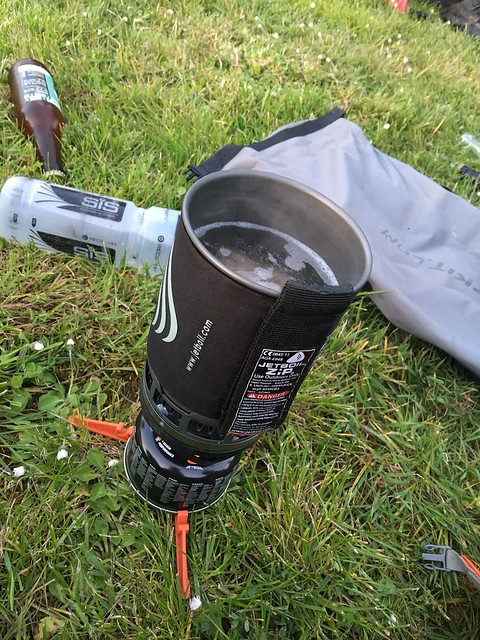 The day dawned warm and sunny and over breakfast we realised that we hadn’t actually factored in getting to the ferry early to check in, so suddenly we were on the back foot and we had to get going quickly….

We had 47 miles to get done, so we cracked on, it was mainly back roads, but we managed to squeeze in a few gravel sections too, but time was short, hence there aren’t many photos! 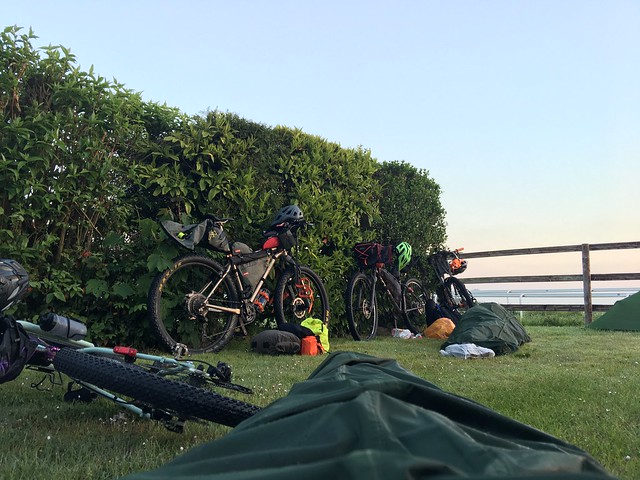 Dodgy dudes at a bus stop. 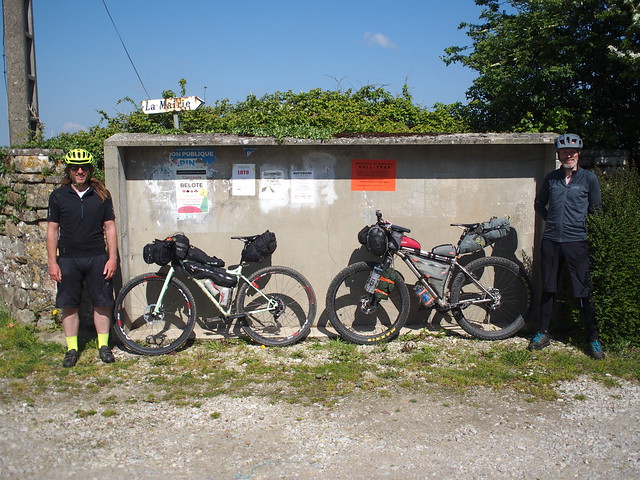 There was quite a bit of head scratching over the route and eventually we succumbed and relied on Garmin’s routing, which fortunately did the job well. 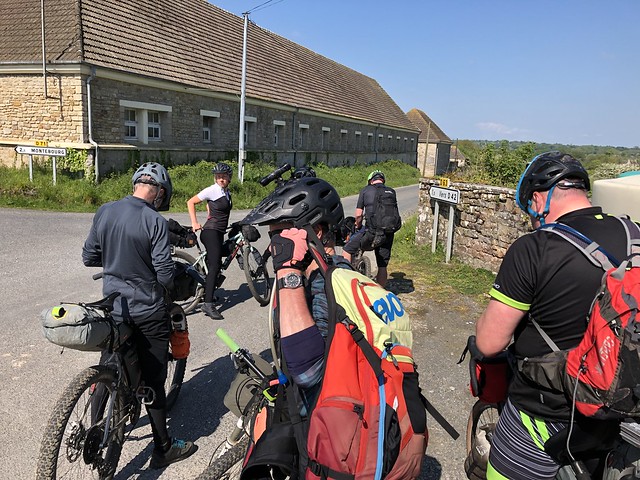 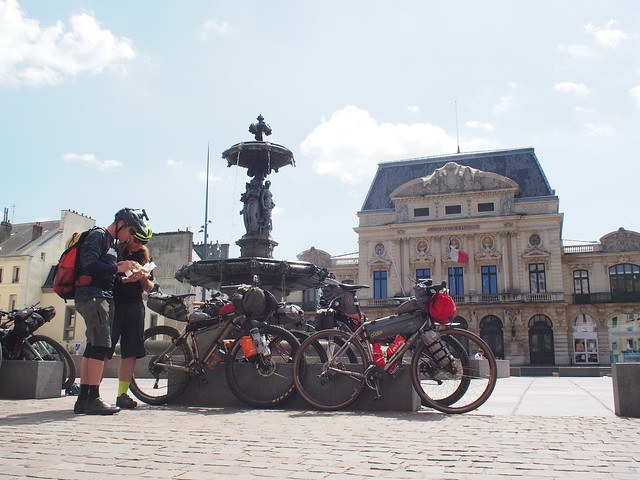 Fortunately we made good time though and we managed to have time left over for crepes and beer. 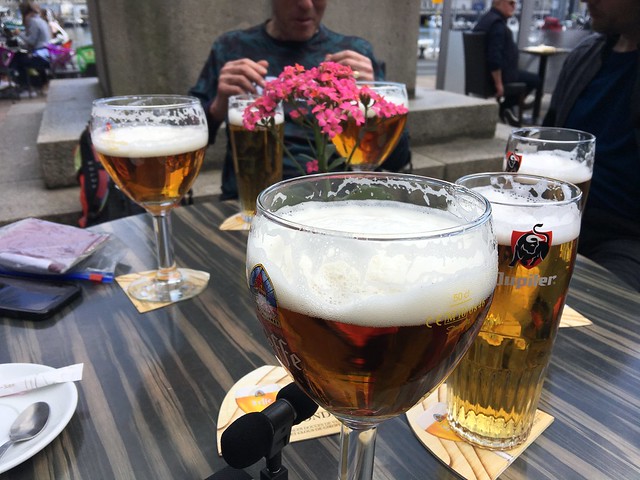 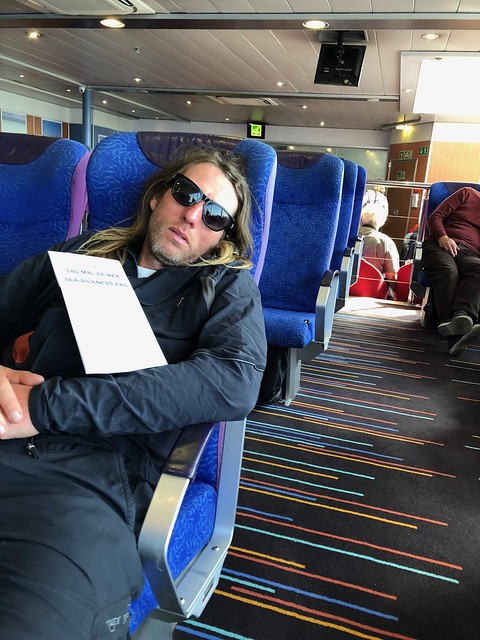 We were all pretty tired when we got onto the ferry back to Portsmouth though. 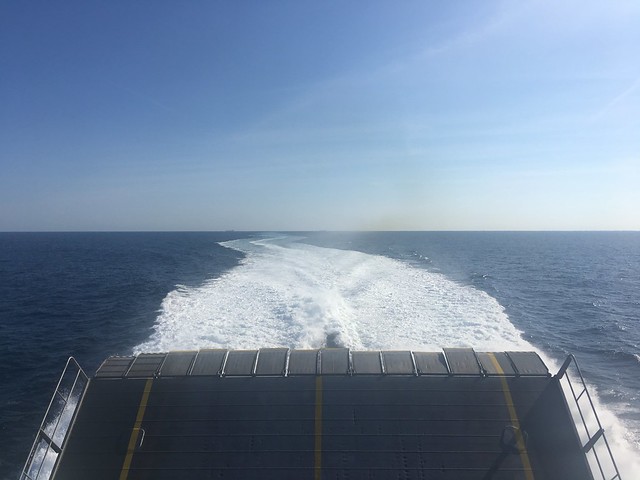 When we got off at Portsmouth the weather was still OK, so half of us decided that we would ride back to Worthing, just to complete the circle. 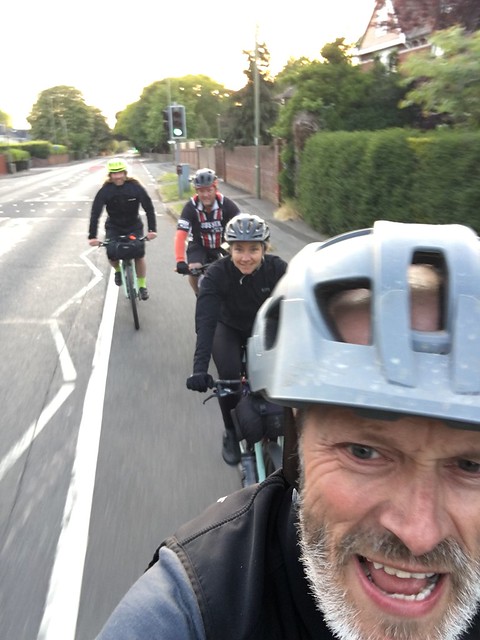 This is the route we rode:

This is a video from the trip: